From April 14 to 20, the 20th Boston International Film Festival took place at Down Boston with a live, in-person method. In the fourth screening session of the BIFF, a film written, directed, and produced by Emerson College students met with audiences in the AMC theater.

“Doll-Kind” is a 13-min film directed by Shuailiang Liu, a ’21  VMA student at Emerson College, and co-written by Freddy Wang, a ’23 VMA student at Emerson College. The film depicts a fairytale future where sentient dolls dominate the land, and humans have become the property of state-run labour camps. A lone escapee returns to rescue his wife and daughter, concealing himself as a mascot in hopes of evading his ex-master. Fate however has something else in mind in a world where no one is truly innocent.

The Independent Magazine editor Lai Jiang spoke with director Shuailiang Liu and producer Freddy Wang to see how a student film crew made its work into the Boston International Film Festival.

Lai: Can you briefly introduce yourself and your role/work in the DK crew?

Freddy: I am the film producer and wrote this film with director Shuangliang

Shuailiang: I am the director and co-writer of Doll-Kind. My main job was to adapt the script with another writer&producer, Freddy Wang, and visualize the script with art director Liu Yujia and director of photography Shao Yifan. We designed a total of 3-4 different color versions according to the atmosphere of each scene, and then called the rest of the creators to meet together to finally select a program and then carry out the specific implementation, the various props you see in the finished film, including a variety of small decorations on several actors are the result of our collective wisdom. 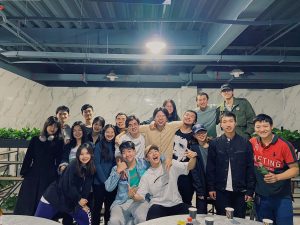 Lai: How do you get the inspiration to do this film? And what is the overall information that the film wants to convey to the audience?

Freddy: The inspiration for the film actually came from many places. First of all, the script itself is actually what I came up with after watching “The Deer Hunter”, but the funny thing is that “The Deer Hunter” has nothing much to do with the theme of the film. Other elements of the film, such as the scene layout from the film “The Hateful Eight”, music from “Django Unchained”, the main idea of the reference to “The Handmaid’s Tale” and “Django Unchained”, the animation at the beginning also has a parody of the “Fallout” game series style.

Shuailiang: It was the producer Freddy who mentioned the script to me once when we were in a random conversation. Freddy was inspired by some movies he had seen before.

We were both back in China from Emerson because of the epidemic and participated in Emerson’s overseas learning project at UIC, so Freddy offered me the position of Doll-Kind director. The original version actually had a lot of dark humor in it, but after I took over the script, I discussed with Freddy, wanted to add some anti-utopian plot and put some ideas about the current fragmented society into it. Hence, I changed it and it became the worldview and story of the finished film.

Lai: Is there any special meaning about the “girlfriend” role that appeared as a doll in the film?

Freddy: In that worldview, first of all, any kind of toy is alive, so the character of “girlfriend” is rightly alive. The background of the movie has a lot of references to the American slavery period, so when writing this role, we wanted to reflect more on the general perception of women being stereotyped in that era, and satirize it.

Shuailiang: The character of the “girlfriend” was in the very first script, and it was a point of dark humor that we wanted to keep. We watched a lot of movies in the process of revising the script that responded to the slaveholding era, and one of the recurring roles in the movies was the image of the mistress of the manor. These characters did not directly persecute the slaves as the slave owners did, but rather had an innate, superior way of thinking about the race that was “inferior” to them. So we kept Julie’s character (the girlfriend) and her “characteristics” in the hope of satirizing such people.

Lai: The forest and the cabin are the two main scenes of the film, were there any interesting things/challenges that happened on set? Was the shooting environment tough?

Freddy: In fact, it is a very difficult thing to do to replicate a fine art log cabin in the country. And building a log cabin is actually not an easy task for the student crew. From the frame of the cabin to how to design the structure of the cabin to the decoration, it was all studied and tackled by the students. The cabin also has to meet the ability to pass the wire, and then let the light shine down from the head of some other elements, so it is a very complex thing. The more difficult thing in the mountains was the bathroom and the problem of going up and down the mountain. But I’m proud of the fact that our crew and actors really worked hard to get the job done!

Shuailiang: In my initial idea, the grove should be more like a coniferous forest in Northern China, but since we selected our location in Shenzhen, we ran through almost all the forests in the city and couldn’t find an ideal location. Finally, we found a place near Freddy’s house where both the photography director and I thought it would be great, however, because it was a mountain, some of the paths were steep, but the production team was very responsive and set up safety ropes at the venue in advance to facilitate everyone to reach the destination safely. We also designed the cabin from the very early stage, and I would like to thank our other producer, Vicky Wang, for providing us with the site to build it. I met with the photography director and art director to plan the overall structure of the cabin based on the designed subplots, including the difference in atmosphere between the toilet and the cabin to plan the decoration and lighting plan. Since the cabin was built completely from scratch, basically every member of the team was responsible for part of the set-up. 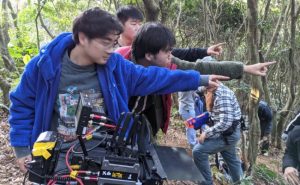 DK crew in the forest

Lai: What was it like to find out that your short film would be screened at the Boston International Film Festival, and what did it mean to you/the crew?

Freddy: The festival was our premiere, so it was very moving and gratifying to see our film on the big screen for the first time! What is important is that Emerson and the UIC students worked together to create such a work, and this process is what we value most.

Shuailiang: The Boston International Film Festival was really a surprise for me. I remember it was the middle of the night in Beijing time, and Freddy suddenly sent me a message saying that the DK got into BIFF, and I froze for about half a minute before I remembered to reply. Although I had already graduated from Emerson College, I was still very happy to screen in the AMC theater, where just near to the school, especially since most of the group members were still in Boston, which was the best reward for all the sleepless nights, and I would like to thank everyone for their help. 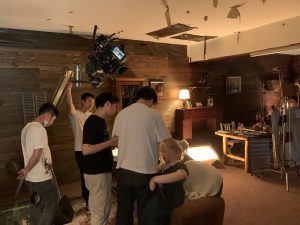 Lai: Do you currently have any other film works in progress? Or what are your next study/work plans?

Freddy: Now I am participating in the production of an independent film “Mei” with other members of the FPS organization (Frames Per Second), the oldest film organization in Emerson College. Hopefully, the film will be completed after the summer!

Shuailiang: Currently I am in the gap year and waiting for several offers from graduate schools. I am also doing some commercials and short films in China. I believe the film is about waiting, a slow process of accumulation.