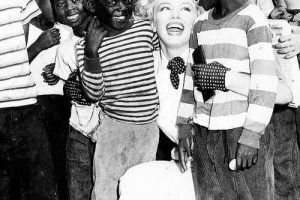 “The Studio Doesn’t Own Me’’

The 1950s was era of bigger stars, bigger budgets, and bigger bombshells. At same time, the studio system was weakening in the wake of television and a fearless and libelous emerging tabloid press. In this fifth series installment, Kerry McElroy examines the supreme pop cultural star of the twentieth century, Marilyn Monroe.  Examined, in her own words and in new ways, McElroy’s Monroe is a kind of economic sociologist, a surprising forerunner of the #MeToo movement, and a forgotten proponent of social justice. Finally, McElroy considers another marquee court case, one in which star actresses fought back against the tabloids with bravery.