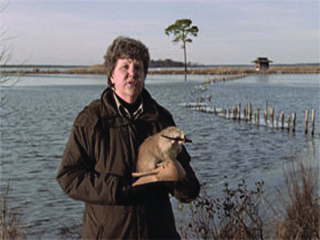 Logline: Local girls compete in a pageant to become queen at the world championship of muskrat skinning

Length of time from pre-production to broadcast air date: 3 years

Budget: Self-financed by Nicholson’s day job in advertising. So how much was it? Nicholson says she’s not sure. “I try not to add it up, because I could be living in a much, much bigger apartment,” she says.

Nicholson’s father invited her to the world championship muskrat skinning competition back in 2003. She thought he was kidding, of course, but decided to take the drive to Maryland to check it out anyway. A year later, she went back with a camera crew to film the 50th anniversary of the beauty pageant.

Film school: One hilarious and humiliating summer at Tisch (NYU). As part of those classes, Amy made her first documentary called Beauty School, a 10-minute short.

Other studies: Documentary production classes, cinematography classes, and books piled to the ceiling.

Beyond academia: Nicholson has worked in advertising for years and spent a lot of time on commercial production sets. While she jokes that she spent most of her time at the craft services table, some of the filmmaking aspects sunk in. She also played a role in creating the famous “Wendy the Snapple Lady” campaign. Through that experience, she learned how to interview people from every walk of life. “My sister says I could hold a conversation with a doorknob,” she says.

Survival strategy: “Working as a freelancer in advertising allowed me to make enough money, but also take off hunks of time,” she says.

Previous films: She made Beauty School, a short film about the New York School of Dog Grooming that was very successful on the festival circuit. If you had insomnia, you may have even seen it on PBS. It’s currently being broadcast on the Documentary Channel.

Knowing that the window for shooting would be narrow and fleeting—50th anniversaries happen once only in a lifetime—Nicholson spent a lot of time in pre-production. She traveled to Maryland before the shoot so many times she can tell you which rest stops on the Jersey Turnpike have the nicest bathrooms. She spent hours meeting with the people she intended to film, and painstakingly plotted every potential shot on a map. By the time she arrived on site with her camera and sound crew in tow, she had already become a familiar face in the closely-knit community.

“Traveling with such a small crew was a blessing and a curse,” she confesses. Having a skeleton crew meant that everyone and all of the equipment could fit in one car, making logistics easy. But it also meant that Nicholson was doing everything, from arranging the interview schedule on the fly, to making sandwiches at 4 a.m. each day. She really wishes she had hired an assistant to help load gear and go to the grocery store. She would have also hired a second camera for the night of the pageant. She credits cinematographer Jerry Risius for making the single camera coverage work as well as it does in the film, but with everything shot from one side of the stage, it was tricky to cut the most crucial part of the film together.

Muskrat Lovely premiered at The Hampton international Film Festival (in competition) in the fall of 2005 and traveled the festival circuit for a full year before its broadcast on the 2006/2007 season of Independent Lens. Maryland Public Television has recently rebroadcast Muskrat Lovely twice in prime time, and the film continues to be invited to screenings.

“I remember the day that Cara White, publicist for ITVS, called me at the crack of dawn to tell me to go get the paper,” Nicholson says. “Muskrat Lovely was reviewed in the Arts section of the New York Times, and it was a great review. It’s rare for them to review a film without theatrical distribution, so she had gently lowered my expectations. I ran out of the house to go to the corner store with my clothes over my pajamas.”

Nicholson had barely recovered from the sleep deprivation induced by making Muskrat, when she bought the Daily News one day to do the Jumble. A story about a certain carnival ride that was leaving Coney Island caught her eye, and she began filming Last Day of the Zipper in May 2007. She is headed into post-production this summer.

Story consultant Fernanda Rossi has helped filmmakers craft the story structure of their films. She has doctored over 150 documentaries, fiction scripts, and fundraising trailers including them the 2007 Academy Award-nominated Recycled Life by Leslie Iwerks. In addition to private consultations, lectures, and seminars, she has served as a festival juror and grant panelist. Ms. Rossi also writes the bimonthly column Ask the Doc Doctor published by Film Arts magazine, and is the author of the book Trailer Mechanics: A Guide to Making your Documentary Fundraising Trailer.

Read the Doc Doctor’s previous “Anatomy” columns on Plagues & Pleasures on the Salton Sea, The Longing and I Was a Teenage Feminist.

Meet the Doc: Fernanda Rossi will be presenting her signature workshops and speaking throughout Israel and Europe this summer. For details check Documentarydoctor.com.