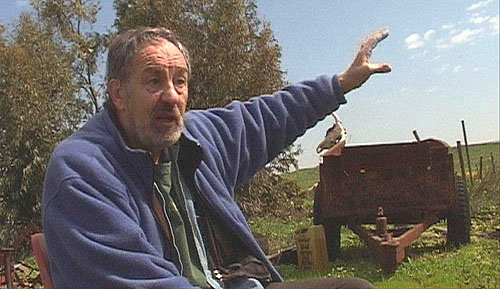 A still from "This Is Where My Dog Is Buried"

This Is Where My Dog Is Buried, produced and directed by Nir Keinan

Logline: An emotional and geographical road movie that takes filmmaker Nir Keinan along the many places where people that mattered to him are buried, until the final revelation on whether he has to choose between killing or dying.

Length of editing: Six months of traveling back and forth to the Netherlands northern village of Westerwijdwert (the place where everything happens and nothing really happens)

Research and production done with less then $4,000 from The Israeli Second Authority For Television and Radio; post-production and retro money for the time the producer suffered making this film generously invested by VPRO The Netherlands; money for an Hebrew version given by the same authority & Tel Aviv Joshua Rabinovitz Fund for Literature and Art.

Studied in The Sam Spiegel School for Film and Television in Jerusalem. Worked for years in the Jerusalem Cinemateque, patching old celluloid, making sure films run, that the actors play and that audiences were cool, while managing to watch a film here and there. Later put his film knowledge into practice by developing youth and adult programs with the intent of using filmmaking as a way of understanding one’s society and self. Left Israel for good several times, published a short novel in between. He now lives in Israel with his wife and two children.

Other studies: Islam and Psychology in the University of Amsterdam

Beyond academia: Worked as a grip, camera, director’s assistant, and editor for no money whatsoever. Paid the bills by founding a mover’s company with two hungy film students.

Survival strategy: Not even one dream completed so kept on dreaming while running

More strikes of luck than smart moves, or both. Met left-wing Jewish Dutch multimillionaire who put him in touch with Dutch media, which in turn financed part of his film. More luck and destiny had some ex- film school mates working at a Dutch network. The smart move was to keep them in the fold in spite of serious artistic differences. Mastering conflict resolution brought the loose team together at the critical point of the final financing.

Taking a volunteering student as a soundman.

This is Where My Dog Is Buried was premiered in Utrecht’s Film Festival. Broadcasted in VPRO. Gained some attention at the Israeli Competition in Doc Aviv-Tel Aviv Documentary Film Festival 2005. Broadcast the same year in Israel’s Channel 10, on the National Memorial Day for the war losses, and gained a lot of angry right wing critics, asking how come a film that shows compassion to the enemy is shown on such an aching day? Participated in Munich Documentary Film Festival and broadcast in, yes, the Maory Channel of Australia. Planning on coming to NYC for Yom Kippur screenings and intensive Q & As (for bookings n.keinan@gmail.com).

“Saying special thanks to my wife at the premiere,” says Keinan without hesitation. Also firing the volunteering soundwoman after one week and taking the boom into his own hands. Plus an unexpected phone call, the sister of one of the deceased persons in the film, she found his number and called to thank him.

The Doc Doctor will be presenting her signature workshops and speaking throughout Israel and Europe this summer. For details check www.documentarydoctor.com

Read the Doc Doctor’s previous “Anatomy” columns on Plagues & Pleasures on the Salton Sea, The Longing and Muskrat Lovely.