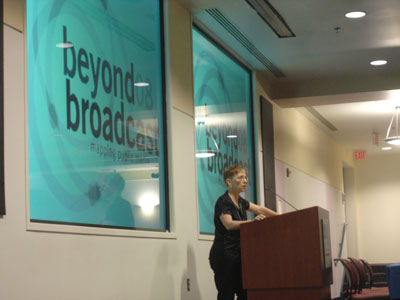 Pat Aufderheide at Beyond Broadcast Conference.

At SILVERDOCS 2008, writer Randi Cecchine talks with Pat Aufderheide, founder and director of the Center for Social Media at American University, about moving their Beyond Broadcast conference to SILVERDOCS, unraveling the complexities of fair use, and taking on the future of public media.

You are involved with SILVERDOCS in a bunch of different capacities — what are the different hats you are wearing here?

SILVERDOCS for me is a fantastic event because it pulls together people who are from the industry, from independent production, the nonprofit community, and educators. It is a tremendously fertile place to have any kind of event that touches on at least two of those sectors.

At the Center for Social Media, we live on partnership. We are a function of the Film and Media Arts Program of our School of Communication at American University. We depend on our partners to make connections that are really vital.

We deliberately chose to host our conference, Beyond Broadcast, on the first day of SILVERDOCS. We see that people who care about the future of public media and broadcasting also are interested in the vitality that independent producers bring to public media.

We think there is a terrific synergy around ideas of which public media will be around tomorrow. And it will, we hope, be the circle around which creative, passionately-invested producers make for engaged audiences, to engage tomorrow’s public sphere.

Tell me about the Beyond Broadcast Conference?

This is the third year of Beyond Broadcast — the first year was at Harvard, the second at MIT –and we are proud to host the third year at American University. Each of these years has showcased an evolutionary development of media for public knowledge and action and this year we were able to involve CPB, and PBS, partially because they are here in the DC area. We wanted to sample the most exciting innovations in media for public knowledge and action.

Can you talk about the Statement of Best Practices in Fair Use for documentary filmmakers?

We are really excited because the fair use for documentary filmmakers statement has not only become industry practice, it’s moved into the common discourse. Two filmmakers came up to me in the film festival so far and said that they used this statement to clear their films. I never met them, I didn’t know them, they found out about the Statement through other means, and that’s the best news I could have.

Tell me about your new book Documentary Film: A Very Short Introduction?

I have had the privilege to publish a new book in a series called A Very Short Introduction by Oxford University Press. My book is addressed to everybody who ever asked the question: Can you really call Michael Moore’s movies documentary?

I watched Fahrenheit 9/11 with an old friend who worked for public broadcasting and her husband of many years, a retired Navy officer, who told me after the screening: “That film was full of cheap tricks and I loved every one of them!”

That’s when I knew how to structure my book — it was to answer the question: Is Fahrenheit 9/11 a ‘real’ documentary? What’s the kind of truth we should be telling people? And what do we expect of them? And what do we bring to it?

I’m thrilled that the SILVERDOCS conference addresses the question of how do documentary filmmakers invest themselves in the question of action? Until this era, they’ve never been able to do that, and now they can. Documentary filmmakers can now find their audiences before they start their film, they can sell their film directly to audiences of their choice, they can design their long-range outreach program in conjunction with partners and they can do all of this on the web. And these are all issues that are being addressed in SILVERDOCS panels.

Ten years ago, I was working with Paper Tiger Television and I was meeting a great network of people around the world calling for this kind of community-engaged media work. I see those seeds very present in this conference and festival. Can you talk about that?

There used to be a world of alternative media that was opposed to mainstream media, and now mainstream media is disintegrating, and there’s lots of new voices surfacing that will have to win listeners, viewers, investors…and the people who do that win. So who is that? I hope it’s not just the commercial voices. And I hope they get some support from the traditional support for public media, which is government. I don’t know that they will, but they will if people demand it from their representatives. And I think that if people demand it of their existing public media resources — public TV, public radio, cable access, nonprofit satellite link — if people show up in all those venues and say “Hey, where’s my public media?” then elected representatives will care.

Do you have examples of that kind of action?

Cable access exists today because people did that in the old days; public broadcasting exists because people did that when they were fed up with the way public broadcast was compromised; independent producers mobilized to create the Independent Television Service (ITVS). Independent voices mobilized, in I think 1992, to insist on set-asides that created nonprofit entities for satellite television. These are all fights we can claim!

I think all of those sites are really important to claim, people should own those sites now and ask how do those sites work on my digital TV in 2009? Will publicly significant media show on up that? It will if we ask it to!

How can we think about this in a more international perspective?

I think we are all bound by our networks. Until now we’ve been ‘the most important people on the planet ever, because we are the richest, but that isn’t lasting, as you can see with the price of the Euro, and it isn’t going to last if you see the energy of the Chinese market. We will learn from others as we grow.

The international space is complicated by many, many trajectories that we only have one view on…we are who we are, and we do what we do…the more international experience we can have the more we can understand, but every time we cross a border of any kind, it’s another vector in the story!

Can you tie that into the international implication of the Statement of Best Practices in Fair Use for Documentary Filmmakers? How does that translate into law outside the US?

Fair use is something that only applies to US law although the basic principle applies everywhere. The basic principle says that copyright holders cannot be complete gatekeepers on information forever. There has to be some escape hole. There’s always an escape hole in law, wherever it is. The challenge for documentary filmmakers and others is to figure out where the escape hole is that allows people to assert their ordinary right of freedom of expression.

Those first amendment expectations are pretty unique in the US, as The New York Times has been reporting recently.

Yes, what we think is natural is created and that’s a really good lesson, because it reminds us that we can create the future we want!

The Center For Social Media: www.centerforsocialmedia.org/

Download The Statement of Best Practices in Fair Use for Documentary Filmmakers (Other fair use documents also at www.centerforsocialmedia.org/resources/fair_use)