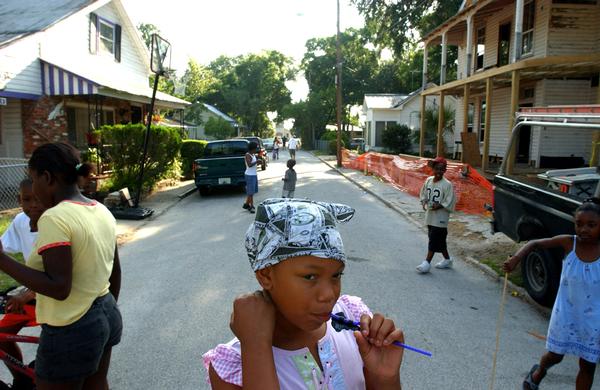 Jeremy Dean found a dusty VHS tape tucked away in the basement of a historical society and was captivated by its the black and white footage of the civil rights struggle. “As I sat alone watching Dr. King speaking to a packed church and the demonstrators fearlessly marching for freedom, it became a key that unlocked a mystery. This was my link from the present inequality that I saw to its roots in the Jim Crow era of the past.”

Dean took to the streets of St. Augustine and interviewed some its youngest, poorest residents. He anticipated a connection between their present-day struggles and the work of Dr. King, but didn’t find it until he started making the film. He hopes that the result will challenge audiences to consider how much America has changed since the days of Dr. King.

Dean credits this unique and relevant perspective on civil rights for landing him a distribution deal with THINKFilm, and then Indican Pictures, which eventually led to a DVD deal with Wal-Mart. The November release of the DVD put Dare Not Walk Alone on the short list of documentaries to ever be carried by the corporation.

Dean shares with The Independent how his choices as a filmmaker led to the distribution deal with Wal-Mart and what he hopes will be a successful DVD release.

How has your experience as a filmmaker differed from other filmmakers who sought the same sort of success but, perhaps, fell short?

I’m not sure if I am all that different, I think everyone is trying to make the best film they can. I was very conscious, though, to make a film that offered a new perspective told in unconventional way. Films about the Civil Rights Movement have become a genre unto themselves and, in my opinion, follow the same script, so I wanted to make something that went in a new direction and spoke to the reality of race 40 years after the movement. This is what makes Dare Not Walk Alone different from any other civil rights film because it is rooted in the present. We have taken two worlds that seem totally disconnected and juxtaposed them to find connections from our history to problems we still face.

This approach felt natural to me because my background is in visual art, where connections are made by combining unrelated things, shifting scale, color, composition, forcing relationships, until a new reality or awareness is created. By combining kids living in ghettos dreaming hip-hop dreams with the hopes and bloodshed of the movement and its aftermath, we have taken two worlds and created a relationship that is not immediately obvious, but in the end leads to a new understanding. Some people love this aspect of the film, others hate it, but no one is ambivalent about it. The film usually gets a strong reaction and starts a dialogue. And that was my hope.

I did not want to just play it safe and do a historical piece, I wanted to take a chance and make something that would challenge our notion of how far we have come. But the truth is that this message has resonated with audiences across the country because they see elements of their community mirrored in the streets of St. Augustine. I think it was that conscious decision to take a risk and try a new approach that separated this film from many others and ultimately got the attention of distribution channels.

Why do you think Dare Not Walk Alone was picked up by Wal-Mart when they have passed on so many other documentaries?

A lot of that credit has to go to Indican Pictures, they did the deal with Wal-Mart, but I think that now more than ever people are ready to talk about race and class in a meaningful way. I had hoped that Katrina and the government’s botched response would have started the conversation but I think Obama’s election really has made the difference. In part because we have a positive framework to begin the discussion as opposed to the usual conversation starters that have more to do with some horrific incident that rightfully enrages African Americans and puts whites on the defensive. I think now we can start the conversation on more of an even playing field. So I think the climate is right for DNWA even though in many ways it is challenging to black and white America alike and does not let either off the hook for where we are today.

But, a film like yours can still launch critical dialogue about race?

Though I am extremely happy to see the election of an African American president in my lifetime, it does not mean that we have finally achieved total equality across the board on issues of race and class in this county. That is where DNWA is so important, because it shows that though we have come a long way, we still have a long way to go, especially as it relates to poverty stricken disenfranchised black communities. As Errol Jones says in the film, “There is poison in the soil, and you have to dig it up, turn it over, expose it to the light, so that we can build community on top of it.” Dare Not Walk Alone is about exposing what has been long forgotten, buried and marginalized so that we can build the beloved community that Dr. King always envisioned.

You’ve mentioned before that being picked up by Wal-Mart was “the beginning of a personal moral dilemma.” Can you elaborate on that?

Like every other filmmaker I want my film to get out the widest audience possible, so in that respect the Wal-Mart deal is good, but on the other hand I hate to feel like I am benefiting from corporate America that has a strangle hold on this country contributing to outsourcing, greed and the homogenization of America. To quote [folk singer] Greg Brown, “Soon there will be one corporation selling one little box and it will do whatever you want but cost whatever you got.” So it’s a weird position to be in, we need to sell DVDs to pay back all the money we owe for creating the film. For me I guess it’s just more getting used to the idea that this is how the world works, but I am encouraged to see Wal-Mart’s commitment to the King monument in Washington and some of their other initiatives.

How has your career changed since your distribution deal with THINKFilm and then, following their buy-out, Indican Pictures?

In short, very little. This is my first feature so I am still figuring my way through the maze of the industry. But it’s not like as soon as you sign a distribution deal that all your problems are solved and the work is done, in fact it means that now you have more people to deal with and you have to fight to keep the film on the mind of the distributor, and hold them accountable to what you agreed on. THINKFilm opened a lot of doors by getting the film out there in a bigger way but before we could really move forward they (with no warning) were bought by Capitol Films and now owe us money that they refuse to pay because no one at Capitol can figure out the records. So we went on to distribution with Indican Pictures who released it theatrically and is now putting out the DVD. So in a lot of ways as an independent filmmaker you are really never done with your project, the style of work just changes.

What advice can you give other documentarians who are hoping to find the same kind of success for their films?

First I think you have to define what success looks like for yourself. For me it was the process of working on the film and the personal connections I made with those who shared their lives with me. In my opinion the biggest success was convincing a white church to apologize to four African American women who, as young civil rights demonstrators in 1964, were barred from worshiping there, spit on, called all kinds of names and arrested. It is a very moving moment in the film when those ladies come back 40 years later to that same church and enter it for the first time as honored guests to receive a heartfelt apology from the congregation. I don’t think there could be anything better than that. So I think you have to get validation from the work itself and one’s own success is really measured by how well you do with the story at hand and with the resources available. Gaining success in the industry is far more elusive and before anyone reading this gets the wrong idea, I must tell you that I still wait tables to stay alive long enough to keep working on films. True independent films are made by real people who work hard, sometimes against incredible odds, to figure out ways of telling stories. So I guess my advice is to be tenacious and keep working. Make films that say something in a fresh way and once you have done that, don’t give up on it. It took over three years to make Dare Not Walk Alone in a process that stretched me beyond anything I thought I could handle, but we finished it. Then I found out that was just the beginning, getting the attention of distributors and on to theaters and DVD took another three years. In that time there was a lot of room for doubt, but we stuck with it and with hard work and a bit of grace, got it out to the world.

What role did you play, as a filmmaker, in successfully marketing your film?

I think the strength of the film’s marketing is really the film itself because it is very unconventional for its genre, so I think it was new and different enough to catch the attention of people. That being said we did put a lot of time into the art and packaging of the film for its initial release to festivals and distributors. My background in art means that visual images are very important to me and I worked with a very talented graphic designer named Jimmy Reeves who came up with great branding for the film. We used these clear jewel cases that allow you to put something in the spine and I decided to play off the idea of an American flag that Jimmy used for a lot of background imagery. So I soaked real flags in coffee and cut them in strips, frayed the edges and put them in the spine of all the DVD’s we were sending out, I probably did over 100 of them. When I was at Cinequest for our premiere I asked what made them select our film and one of the reviewers said the packaging initially sparked his interest and made him want to watch the film. So every bit helps. Beyond that we just did a lot of old fashioned email and phone calls. A lot of the credit goes to one of the film’s producers Stephen Cobb who is a computer and Internet genius, he really kept the film alive on the web.

What other projects do you have in the works, and do you hope they will follow the same path of distribution as Dare Not Walk Alone?

As with every other filmmaker, I have several projects that I would like to see get made, a few documentaries, one about surfing in the favelas of Brazil but I am most excited about a script for a narrative feature I have been writing, that is getting most of my attention right now.