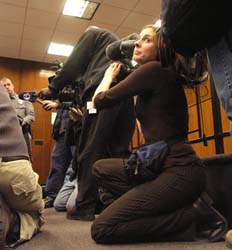 Director Cynthia Wade filming the freeholders, the subjects of her 2008 Oscar-winning documentary.

As a sophomore at Smith College, Cynthia Wade found herself witness to a small scandal: a friend discovered she was pregnant and decided leave college, marry her boyfriend and have her child, going against the feminist attitude many of her classmates held. So, in true documentarian form, Wade’s first instinct was to get it on film.

With one documentary under her belt, Wade was hungry for more and, as a senior, designed a thesis project that included an hour-long documentary about the challenges of Smith social life. By the time word of the doc got out on campus, stirring up some controversy, Wade knew she wanted to pursue the craft professionally.

Now best-known for her Oscar-winning short documentary, Freeheld, Wade is still looking to stir things up by bringing awareness to subjects that may not get the attention they deserve from the government or the media.

In an interview with the Independent, Wade discusses how her career has evolved since her Oscar win for Best Documentary Short Subject in 2008, what she has coming out in 2009, and how she discovered her compelling subjects.

Can you tell me about yourself as a filmmaker?

After college, I founded the video program at the Fresh Air Fund (where I developed and ran a very basic video program for low income, inner city kids), and later attended Stanford University’s documentary M.A. program. After Stanford, I spent six years developing and running programs at homeless shelters in New York, trying to figure out how to make a living as a filmmaker. My Stanford thesis film was a short documentary about single homeless mothers raising sons (Almost Home, distributed by Fanlight Productions).

The first big break was in 1996, when a film I co-produced and shot (Taken In: The Lives of America’s Foster Children, directed by Vanessa Roth) received ITVS funding and was picked up for national PBS broadcast. After that, I started working more regularly as a cameraperson and field producer for A&E, The History Channel, Discovery and MTV, and then went on to direct my first feature-length documentary, Grist for the Mill (Cinemax, 1999), followed by my feature-length documentary Shelter Dogs (HBO, 2004). Along the way, I was teaching film, directing commissioned films for schools and non-profits, and shooting documentaries for other directors. And then came Freeheld.

Can you tell me about Freeheld? Did you know you had an award winning story when you first started filming?

Freeheld tells the story of New Jersey police officer Laurel Hester, who upon finding out she is dying of cancer, is told that she cannot pass her pension on to domestic partner Stacie Andree. Laurel decides to fight this injustice until her death.

Laurel’s biggest hope was that her story would mean something for hundreds of other gay and lesbian couples that face discrimination. She asked me to finish the film and take it as far as I could. I took that responsibility very seriously. She never lived to see the finished film. She never even saw the trailer. I felt personally responsible to share her story with as many people as possible.

Because I only knew Laurel for the last ten weeks of her life, the footage was very limited. So I made the decision to create a short film — under 40 minutes, which is what most festivals define as a “short film.” We premiered at Sundance 2007 and won the Special Jury Prize in Short Filmmaking for the film. I don’t think we would have gotten into Sundance if the film had tried to compete as a feature length film. We simply did not have the footage to sustain a 90-minute arc. So it was a case of recognizing that in telling this story, “less is more.”

What have been some of the effects, positive or negative, winning an Oscar has had on your career?

Winning the Oscar for Freeheld was an unforgettable and thrilling experience. It’s definitely opened new doors, both for the film and for me personally. I am really grateful to have had the experience. It’s something I will never forget!

In many ways, though, the Oscars have very little to do with the day-to-day challenges of running a small documentary production company. Prior to the event, one Oscar-winning documentary filmmaker said to me, “It’s like going to the moon. Prepare to go to the moon. You will go to a world that has very little to do with your real life, and then you’ll come home.” And that was an accurate description. I climbed into the limo with $200,000 worth of borrowed diamonds and it felt like I had gotten into a rocket ship. Off we went. The ceremony was glamorous and surreal. I had this incredibly emotional experience in front of 35 million people, which was the most public and raw experience I have ever had.

I was glad to be able to share Laurel’s story with so many. Freeheld was the number one googled term on Oscar night, and our website instantaneously got 11,000 hits from 78 countries and all 50 states. The film has been used as an educational and outreach tool in nearly 200 community screenings since its debut at Sundance in 2007, and helped move the dialogue about LGBT equality in many communities around the world.

But as we all know, independent filmmaking is hard work. When I came back from the Oscars, I visited my students at the New School, and one of them asked, “Does that mean you’ll never have to work again?” And I was like, “What?” It’s amazing to me how many people assume that the streets must be paved in gold. There is hard work ahead, but those quiet, struggling moments are often the best moments.

You have a number of documentaries under your belt. What draws you to making documentaries? Where do you find your stories?

As a filmmaker, I am attracted to tough stories about controversial issues, usually told through the eyes of strong female characters. Most of my films take a detailed look at a larger, societal issue, while being told from a singular, detailed, personal point of view. I tend to go toward controversy, unfolding drama, and high stakes.

I found Freeheld reading the newspaper, while I found Shelter Dogs through networking. I am always looking for the documentary in front of me. I don’t think that there is one way to find a story — and truth is, the story usually finds you.

What do you have in the works and when can we expect to see it?

I am currently directing a documentary about the Milton Hershey School in Hershey, Pennsylvania, which will air on the Sundance Channel in October 2009. Milton Hershey and his wife founded the school in 1909 with a mission of breaking the cycle of poverty for children. The film follows a few students and their families over an academic year.

I’m also in development on two other films, one of which is fiction.

What advice can you give to novice filmmakers interested in making documentaries? Where can they expect to struggle the most, and what can they do to get “their foot in the door”?

I think it is never too early to think about what the home is for your film. There is no such thing as a general audience — each film has it’s own audience. The sooner you can define your audience and your distribution goals, the more focused you can be during production, and the stronger your finished film will be.

The processing of documentary filmmaking is ripe with challenges for the novice filmmaker. The biggest struggle is perhaps finishing your first documentary. It is easy to lose faith in the creative process, but you need to remain loyal to your original inspiration. You need to protect that nugget of a film that you are carrying around inside, that tiny seed of an idea. It will grow. Just keep putting one foot in front of the other, and keep going.