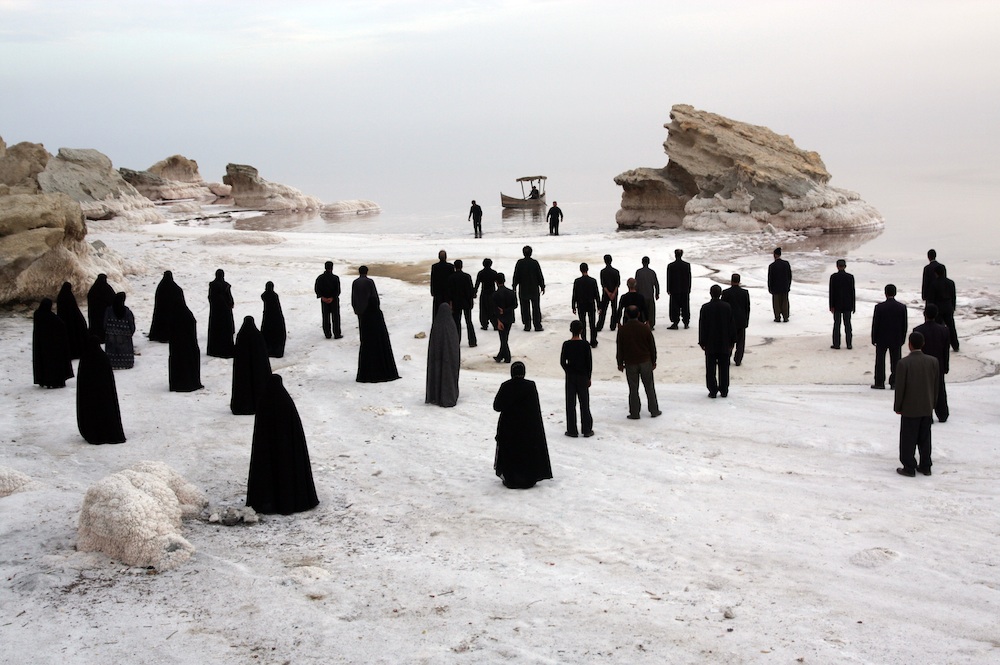 Chalky whitewash in "The White Meadows."

“My job has to do with people’s heartaches,” says Rahmat the boatman (Hassan Pourshirazi), a serious and purposeful man whose unending task seems to be circling the tiny islands and inlets spotted through Lake Urmia, one of the largest saltwater lakes in the world. Rahmat’s specific work in village after village is gathering the tears of mourning families, a job he takes with the utmost seriousness, gently pressing a vase against the face of weeping family members. We’re told that that Rahmat turns these tears of grief into pearls (though we never see this happen), thus absolving the departed of their sins. Since graveyards don’t flourish in dunes, Rahmat does his burials at sea—he’s a floating funeral chapel. The White Meadows quickly draws you into an almost surreal setting of white-on-white calcifying chalk, salt, sand, and sun alongside primitive and isolated peoples who seem to be living on the furthest edges of civilization, about as far from any dictatorial power or regime as one could imagine. Well, not so fast.

We know that the director, Mohammed Rasoulof, was arrested by his government this spring, and so we’re on point to view the director’s agenda. He doesn’t make us wait long; Rahmat’s first corpse is a beautiful woman “who made men wild with desire.” The villagers clearly disapprove and there’s barely a tear shed. Later we see a terrified virgin sacrificed to the sea, with the village elders looking on with approval and self-satisfaction. Rahmat watches but doesn’t comment on these scenes, or another in which a dwarf is burdened with scores of jars containing the confessional tears of an entire village; the dwarf is lowered into a well but clearly the townsfolk “talked too much” because his burden is impossible to maneuver and he dies in the well. Still another confrontation involves an artist who dares to paint the ocean red, thus violating and upsetting the social construct so violently that initially he’s buried up in sand up to his neck. Rasoulof hammers home his points in these wilderness outposts—conformity and modesty and minding your own business win the day—and any other kind of non-conforming behavior can get you an early date with the boatman.

The one visitor that seems to charm and entertain is a traditional dancing monkey in a bridesmaid’s uniform…and, like a number of key elements in this oddly hypnotizing film, the monkey will make a repeat appearance near the conclusion in a most unlikely location. The White Meadows sets up a surprise ending that resolves a number of mystifying elements, and it’s worth the wait. Along the way, the imagery can be staggering. Any film that posits a hermit living totally alone on a mountain of white sand, high up in a one-room shack on stilts, whose single wish in life is for some female company, is worth a few sympathetic tears. “What’s at the far end of this sea?” Rahmat is asked by a young boy who becomes his travel companion for a while. “I don’t know,” answers Rahmat with his usual unreadable look. But maybe he does know. The White Meadows is a delectable blend of fairy tale and polemic.