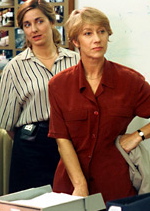 As we enter another fall broadcast season and the networks prepare to launch new fare like Mike & Molly or hype established shows such as House and Modern Family, television viewers do not lack choices. Granted, most will be awful, but not awful enough to drive more viewers to my favorite programs over at PBS.

Frontline, Nova, American Masters and many others have illustrated for decades what PBS is capable of, particularly in contrast to the vast wasteland of network TV.

Yet one cannot live by PBS alone. Rather, one cannot live by American-made documentaries alone. Occasionally television viewers crave murder, sex, deceit, betrayal, greed, love, a pie in the face, or even a kick to the groin. In other words, the kind of vicarious, escapist pleasures that comes from the imaginary world of fiction.

You could argue that there’s plenty of fiction on PBS. Strictly speaking, that’s true. My complaint is that it all comes with an accent. Every show references “queues,” “lorries,” “bobbies,” “bangers,” “blokes,” and “bollocks.” The prime time schedules of two PBS affiliates in the Boston area between September 5-11 include Masterpiece, Keeping Up Appearances, As Time Goes By, The Kumars at 42, Life on Mars, The Old Guys, MI-5 and Lark Rise to Candleford. This is all of the fictional programming for the week, and guess what? All are British reruns. Am I to infer that those of us on this side of the pond are incapable of producing our own masterpieces?

Don’t mistake my opinion for some kind of xenophobic rant. I learned to love the silliness of Monty Python from PBS. Helen Mirren is fantastic in Prime Suspect and so is Geraldine McEwan as Miss Marple. But why must the public station of the United States of America rely upon Britain’s hand-me-downs like some destitute street urchin?

What I am suggesting, selfishly perhaps, is for PBS to bring the same standard of excellence to fictional programming as it does to nonfiction. Granted this is more complicated than it seems. PBS relies on an entity called American Public Television (APT) to develop, produce, and distribute material to PBS affiliates. APT accepts submissions, but seems to prefer “how to” shows over drama. However its content is generated and gathered, there appears to be little interest in even attempting a scripted show, miniseries, or two-hour movie in any genre.

I suppose PBS would claim cost is the culprit. After all, those interminable pledge drives are proof the station is not wallowing in money. Ten, or even five years ago, I would have accepted this as an answer, but most of the readers of this site know that the cost of production has plummeted. Anyone can make a reasonably good-looking film with equipment from Best Buy. Hell, you don’t even need sets.

Old timers can fondly recall a show called Playhouse 90, one of the last of television’s early anthology dramas. With bare-bones sets, these were essentially filmed plays but featured a mix of young talent and established stars. The show helped launch the careers of John Frankenheimer, Franklin Shaffner, Sidney Lumet, George Roy Hill, Robert Redford, John Williams and many more. More recently, television gave us Dustin Hoffman as Wily Loman in Death of a Salesman, another excellent production with a pittance of a production budget.

Take the BBC for example. Despite having ample resources from a politically insulated funding mechanism, their shows generally do not abuse such resources. They simply work within their constraints, focus on writing and acting, shoot on video instead of film, and trust the audience to be sufficiently enthralled by the content so they won’t mind the packaging, so to speak. If you don’t believe me, go rent I, Claudius, the marvelous multi-part adaptation of the Robert Graves’s book of the same name. Did they rebuild Rome? Far from it. In fact, it doesn’t look much more sophisticated than a high school play, which doesn’t matter; using the best homegrown talent, they created a small masterpiece.

I believe the same caliber of talent surrounds every PBS affiliate. Writers, actors, directors, and crew members do not automatically flock to Hollywood anymore. Many are choosing to stay where they are and carving out their own niche. The Independent documents it every month, and if you’re visiting this site, then you probably know it, too. Every PBS affiliate could, and should, be a hub of this kind of activity. Think of what <a href="http://www.nbc.com/Law_and_Order" target= "_blank"Law & Order used to do for the New York scene. So why can’t some type of Law & Order Pittsburgh air on PBS? Why can’t a community entertain its audience while supporting, encouraging, and facilitating the development of local talent?

How about each affiliate holds a contest, where local amateurs submit a pilot, the audience votes for their favorites through several rounds, and then PBS airs the winner(s)? They’re doing this kind of thing at The WGBH Lab, but it’s almost always nonfiction. How about putting a call out to big-name Hollywood talent, offering total creative freedom in exchange for donating their talents? This doesn’t need to be a deviation from PBS’s identity.

I’m not asking for a “dumbing down” or injection of crassness into PBS, but rather an expansion of its identity. Because let’s face it, the current programming lacks daring or originality. And at this moment, film production is within anyone’s grasp if there is sufficient will. A lack of any activity by PBS in this area is purely a lack of will.