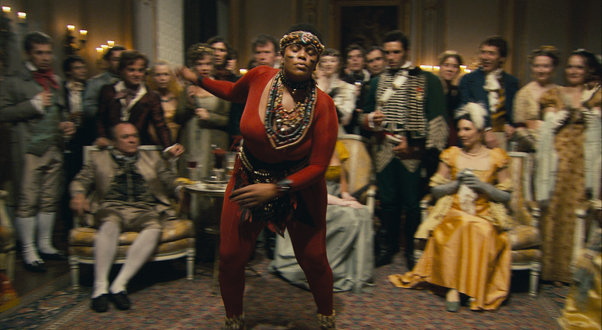 The camera swings up past the startling, life-size plaster cast of the African woman, past the intense anatomist Georges Cuvier (the precisionist Francois Marthouret), who’s lecturing his absorbed colleagues in the banked amphitheater at the Jardin des Plantes. It is 1815, and everyone in the auditorium is fastened on the detailed pen-and-ink close-ups of 45-year-old Sarah Baartman (Yahima Torres), a chronic alcoholic known as “Saartjie,” who died two years earlier of pneumonia and venereal disease.

What Cuvier is show-and-telling in minute clinical detail are drawings of Saartjie’s labia, which are abnormally large and distended (a condition called Macronymphia) and her huge buttocks (a condition called Steatovpgia). There’s a burning intensity in Cuvier’s narration that rivets the attending physicians, and us. This is the opening scene of Abdellatif Kechiche’s Black Venus, his rich, sensuous appraisal and appreciation of the woman who came to be known as the “Hottentot Venus.” Along with Carlos and The Social Network, Black Venus is the most original, supremely accomplished artistic journey in this 48th New York Film Festival. It shows Saturday October 9th at 8:30 pm in Lincoln Center, and at this writing is still searching for a distributor.

The lengthy opening scene described above is a strategic prologue and framing device that sets the serious tone of Black Venus, for it satisfies and defuses our sexual curiosity and any possible prurience or squeamishness we may experience in viewing extreme representations of Baartman’s organs. It’s not any voyeurism on the part of today’s audience that needs to be satiated, but rather the carnival and salon crowds who flock to see Saartjie throughout the film. It’s their erotic fantasies that get fed in viewing a woman who’s billed and exhibited as a freak, since Cuvier the anatomist has lectured us upfront on everything the crowds are paying to see and touch. It keeps us at a safe, comfortable remove from society’s yearning to ogle this medical anomaly, and it’s one of many careful artistic decisions by director Kechiche.

The core of Black Venus is Saartjie’s relationships with the two men who successively train, mentor, and exhibit her—first, the carny talker Caezar (Andre Jacobs) who showcases her as a caged wild animal in London sideshows. These scenes, intercut with saloon interludes of delicious fervor and debauchery, begin Saartjie’s immersion and growing dependence on the bottle (matched by her pal, the lewd, cunning Jeanne, played by Elina Lowensohn, as vivid a saloon slut as you’ll encounter outside the films of John Huston). Indeed, these scenes, cut fast and embedded in a production design you can practically taste, have the kind of primitive power that’s reminiscent of the tumult Huston created in Moulin Rouge and again in the dangerous Mexican cantina of Under the Volcano. Jacobs nearly takes his carny act over the top, but he maintains a thin edge of control over both the rapt crowds and his attraction; we sense he’s using but not physically abusing Saartjie.

If Saartjie had remained as a sideshow and music hall curiosity performing for chump change under Caezar’s rough but caring mentoring, she might have lived a lot longer. But her supervision shifts to Reaux (Olivier Gourmet) who runs a carny act with a trained bear and instantly begins the process of transferring Saartjie up market into the decadent side of French society. Reaux isn’t up to the job; he has none of Cuvier’s essential decency and showmanship. He’s a clumsy lout who becomes Saartjie’s pimp and lets her slide into full-blown blackout alcoholism. Dazed and addled by drink, urged on by the malevolent whore Jeanne to open her body’s extravagant organs to the loins of French artistocrats, Saartjie becomes a pathetic wet brain.

The gifted Torres, in her screen debut, is thoroughly convincing as she desperately tries to hold onto her crumbling dignity. It’s a peerless performance that’s the equal of a far more experienced actress like Lesley Manville, who’s the star of Mike Leigh’s melancholy Another Year, a companion film in this 48th New York Film Festival. Manville plays the aging Mary, a London secretary whose life is running on empty and is steadily embracing the drink. Like Saartjie in Black Venus, Mary is sinking into the same self-willed oblivion she’s powerless to control. Both actresses are striking, but Saartjie has the kind of stature and history that define world class art.

Black Venus is also blessed with a rare and moving kind of closure. We learn that Saartrie’s brain and genitals were exhibited in the Musee de l’Homme in Paris until the late 1970s. In 2002 a bill was passed that permitted the return of the remains of the Hottentot Venus to Cape Province in South Africa, her birthplace, as part of the country’s celebration of Women’s Day. South Africa’s president, Thabo Mbeki, is shown in news clips presiding over these respectful ceremonies. Director Kichiche’s directorial instincts are again unerringly correct in lifting Black Venus into a history lesson for the ages.