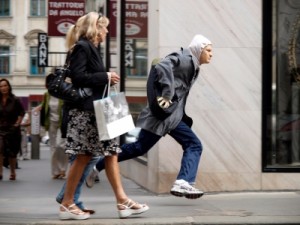 Andreas Lust as the fast-running Johann Rettenberger in "The Robber."

Bet you can’t think of another heist movie with a premise this simple and this original: A champion marathon runner robs banks because he can outrun all the pursuing authorities. The screenplay by director Benjamin Heisenberg derives from Martin Prinz’s On the Run, a literary narrative of Austria’s most-wanted bank robber of the 1980s, Johann Rettenberger. Known in the era as “Pump-gun Ronnie” because of his weapon and a Ronald Reagan mask he slipped on during stickups, Rettenberger won competitions as a runner and frequently hit two or three banks in a day. Author Prinz, himself a runner, was acquainted with Rettenberger. In the film Prinz is credited as the running coach for Andreas Lust, the serious, tight-lipped actor (Revanche, Munich) who plays the serial robber.

The Robber exemplifies a principle many heist film directors ignore at their peril—that one compelling idea, executed with clarity, impact and dispatch (96 minutes) can outrun and culturally outclass fields of competitors. Crime movies like High Sierra, Criss-Cross, Rififi, Baby Face Nelson and Violent Saturday, all the way to Public Enemies (with Johnny Depp, succeeding Lawrence Tierney and Warren Oates as Dillinger) have accustomed us to bank robbers doing hard time and returning to the work they know best. Rettenberger has Tierney’s moody MO as a solitary loner, but he breaks the mold of all the holdup guys before him—most locked in their noir or neo-noir formulas—by getting out of prison and again becoming a runner committed to win. He’s also more fleetly, running from a bank with a bag of money, which gives him a quaint novelty. The Robber pushes filmic conventions aside left and right. It doesn’t just refresh the genre, it damn near reinvents it.

“What I do has nothing to do with what I call life,” Rettenberger quietly tells his reluctant lover, Erica (Franziska Weisz), who discovers his mask and the sacks of cash he’s stashed in her flat. He’s not much more forthcoming with a helpful parole officer, who follows him to another competition and makes the mistake of hounding him about getting a job. Rettenberger is a stubborn enigma, telling one person he constantly dreams of being dead but somehow fights his way back to life.

The film, which adroitly integrates footage of the 25th Annual Vienna Competition (a running race), is lean and elegant in its pacing, viewing this criminal with a clinical neutrality that neither affirms nor condemns his actions. Actual marathon scenes are seamlessly integrated, and the Steadicam work following Rettenberger as he bolts through streets and garages is as smooth as you’ll ever see. As Rettenberger, Lust is marvelous. Crashing through windows at police headquarters, on the run scampering through woods or squirming down holes that hardly look wide enough for rabbits, Rettenberger has something of the purity of a sleek animal. There’s a telling moment when a dog wanders into the entrance of a bank during the midst of a holdup and hesitates, eyeing Rettenberger, before trotting off.

In real life, the criminal Rettenberger was finally trapped by the police and took his own life. Writer/director Heisenberg replaces that ending with a sequence of events and actions that are both more poetic and more dramatically satisfying. The Robber is that rarest of procedurals, the existential thriller, a breed that barely exists any more in the movies than it does in real life.