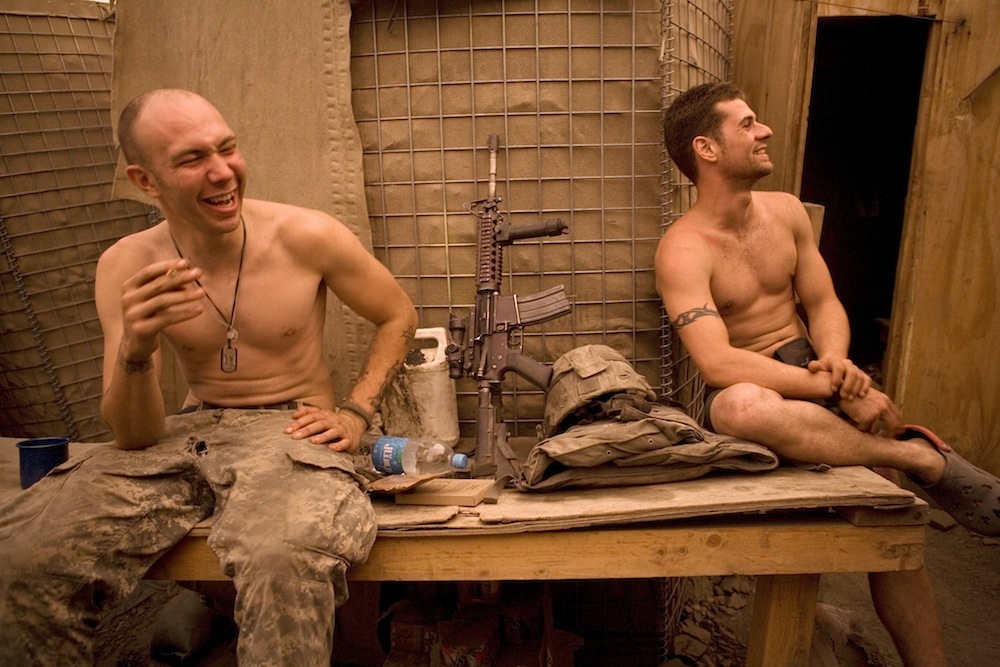 "Restrepo" was one of the films discussed at IFP. Photo by Tim Hetherington.

Anyone who cares about documentary filmmaking wants to know: In the current post-financial crisis, insecure-industry environment, how can filmmakers fund projects and reach audiences when traditional distribution models have crumbled…when even established filmmakers can’t secure the kinds of distribution deals, broadcast partnerships or investment/foundation funders they used to rely on? And perhaps more importantly, what are the newer models that work?

In the old paradigm, filmmakers were told there was a particular sequence of events that all films and filmmakers should follow, from festivals (categorized into tiers A/B/C), to theaters, to broadcast, to educational/DVD sales. Filmmakers were encouraged not to change the sequence of these ‘windows,’ or else risk being rejected by the gatekeepers of the next window. This system worked well for the most successful filmmakers, while many others organized their lives around making the Sundance Film Festival‘s application deadline…only to be among the hundreds rejected. In response, filmmakers who didn’t fit into the old paradigm, media activists and all sorts of creative types, have been building alternative distribution systems for years.

Filmmaker Jon Reiss had a festival success with his film Bomb It, but received no big offers from distributors, and realized that the number of filmmakers walking away from festivals with significant deals was dwindling, and fast. He created a “hybrid DIY” distribution method that later became Think Outside The Box Office, a book and workshop series dedicated to helping independents self-distribute. Reiss pointed out that there’s a responsibility on the part of the industry to let filmmakers know that they shouldn’t tie their hopes to what success looked like in the old distribution paradigm.

The new paradigm is one of greater filmmaker responsibility in all steps of the process. People such as Reiss, Peter Broderick, and many other pro-filmmakers on the panel circuit are showing fellow filmmakers that in order to succeed, they must consider relationships with audiences from the inception of a project.

Fundraising and distribution are now an integral part of the broad category of “audience engagement,” as core audiences must relate to films as funders, consumers, and promoters. At this year’s IFP (Independent Filmmaker Conference), panelists from foundations such as The Fledgling Fund and Chicken & Egg Pictures explained how they fund both production and outreach campaigns geared towards attaining measurable impacts. This is the new paradigm: filmmakers are encouraged to think of themselves as community organizers, entrepreneurs, and storytellers, making sure 50 percent of filmmakers’ time and resources are committed to audience engagement.

IFP was organized thematically, by day, with titles such as “Do or DIY: Distribution and Marketing,” “The Truth About Non Fiction,” and “Sustaining a Film (and Media) Making Career.” The only panel to address the creative process or in-the-field experiences was Tim Hetherington speaking about his film Restropo. For a year he lived with a US platoon in Afghanistan, and made an experiential film that would give the audience the feeling of going through a 90-minute deployment in one of the most “dangerous postings in the US Military.” After speaking of living through bombings and violence, Hetherington joked that “filming in Afghanistan was easier than navigating the film business.”

Perhaps the most effective way for documentary filmmakers to raise funds was offered by Mette Hoffman Meyer, of DRTV (Denmark): “If you are a first-time filmmaker, you should marry very rich.” While a collective laugh filled the room, and filmmakers know that ‘marrying up’ has appeared to serve some artists and filmmakers quite well, subsequent panelists reminded the audience that this isn’t a viable option for everyone, and that it could pose its own problems. As Ingrid Kopp of Shooting People challenged, “the ecosystem that we live in doesn’t get mentioned at these events. If we work full time on projects for seven or eight years, what if we want to get married or have a vacation or sometime retire?”

This reminded me of the informal survey I conducted over drinks after Jon Reiss’s New York City workshop. Asking 18 filmmakers to write the amount of their (non-mortgage) personal debts on a napkin that was folded over, I found a staggering total of $2.6 million. While a stunning $1.5 million of this belonged to one courageous producer, the point of my exercise was simply to raise awareness about this popular, yet not often mentioned, method of film financing.

All of the new paradigm solutions have many successes behind them, and I applaud all of the filmmakers and industry folks who are helping us chart a new path. Bubbling under the surface of all of these conversations, however, is a sense that, along with the significant challenges to our personal and financial lives, the new paradigm creates certain challenges for filmmakers that are not yet being addressed.

What impact does The New 50/50 have on the creative process?

The book Making Work Work for the Highly Sensitive Person argues that the most significant gifts that sensitive people have, the very strengths that make them good storytellers or empathetic with subjects, can be easily squashed if they spend too much time on tasks that tax their psychic energy. Many filmmakers complain that they are not able to focus valuable time and energy on their films, as they find themselves in the position of running a small business. With so many plates spinning, and revenue being generated by the sale of soundtracks and t-shirts, artists might find themselves creatively uninspired to pursue additional projects. The person with the best managerial skills or social media savvy isn’t necessarily the best filmmaker, and a gifted filmmaker might not be able to develop her talents if her time is devoted to tasks that consistently raise her cortisol levels. The passion and strong vision that filmmakers need may not have have fertile room to grow.

Documentary filmmakers already negotiate a very tricky set of creative and ethical considerations as they navigate relationships with the people who become subjects in their films. Often we, as documentary filmmakers, choose to portray people in a friendlier light than might make a compelling story because we are protecting the trust we have made. If we are deeply committed to a particular point of view or agenda, our own values will guide our storytelling and the dynamic, nuanced nature of reality may get reduced to a mere selling point. These have always been the challenges of documentary, as have been the challenges of negotiating the demands of a few funders. But now, as we tie our livelihood to crowd funding, foundations with metrics in mind, and core audiences we want to please, we simply have more relationships and expectations to consider as we shoot and edit our story.

Can our audience tolerate self-criticism or analysis? Will one of our many sponsors be resentful if the film changes course mid-way through? Do these relationships or ideological commitments drive our storytelling? Are we able to push the story to its greatest potential when we have so many people to please?

In political/social issue documentary, I’m concerned that when we surround ourselves by crowds, funders, and audiences who share our ideological perspectives, we may become lazy thinkers, pleased to point out the flaws of our perceived enemies and feeling smug in our own self-righteousness. In America we often seem comfortable painting the world in simple dualities: Good/Evil, Red/Blue, Us/Them. As we become more savvy in crafting stories to fight our ‘enemies,’ they learn our tools and the battles seem to wage on while our common goals get neglected. When we have to sell the outcome of our projects before we’ve started making them, do we lose the freedom to explore and see the world in new ways?

What can we do practically to address these challenges? Reiss is advocating for filmmakers to consider budgeting for and hiring a new crew position, a Producer of Marketing and Development (PMD). IFP will be holding an event in November called Distribution U where filmmakers and aspiring PMDs can get trained in the nuts and bolts from industry experts. It seems that for the lower low-budget directors among us, PMD will be yet another hat that filmmakers should find some enjoyment in wearing until we can raise the funds to hire someone who might appreciate the job more than us.

When I tell people at events like IFP that I write for The Independent there are always moments of sadness for the loss of the Association of Independent Video and Filmmakers (AIVF), the original publisher of The Independent, because it provided advocacy and support services to a dispersed filmmaking community. While expressing her frustration that there isn’t more funding for art films, Debbie Zimmerman of Women Make Movies challenged IFP conference participants to “be bold and demand more as a community.” Bold media activists came together to create AIVF and ITVS.

What would a collective American documentary voice be calling for today? What are groups like Shooting People, Doculink, The D Word and others up to in this regard? What might we learn from The European Documentary Network (EDN)? I think there is also a real need for mentorships and small working groups to help share resources, partner on the daunting tasks, and encourage discussions about our unique creative storytelling styles. Groups such as New Day Films and The Meerkat Media Collective were mentioned as great examples among the people I interviewed. What other resources are out there, or what kinds of small groups can we form amongst ourselves?

Personally, I often feel simultaneously overwhelmed and very clear about the challenges I face in distributing my own work and charting my creative future. I find it inspiring to talk with other filmmakers about their process, and I think that it is in these relationships, especially when we can meet in person, where the new paradigm takes shape infused by our individual and collective input. So, where will we continue this important conversation?

Editor’s Note:
We at The Independent invite your dialogue: What successes and challenges do you see in the current state of documentary filmmaking? What examples of great partnership can you share that we can either join or model? And how can The Independent help?

Correction:
This article originally reported that Tim Hetherington said that “filming in Afghanistan was easier than navigating the film business,” without acknowledging that he was joking and his audience members laughed. The caption on the photo from his film Restrepo likewise did not correctly indicate his intent of the comment. Both quotes have been changed.

Has the Drive to Fund “Social Issue” Docs Affected Their Form?, Randi Cecchine

Shaking the Money Tree: How to Get Grants and Donations for Film and Television, Morrie Warshawski
http://www.warshawski.com/, and Party Like a Doc Star

One Response to “Greater Filmmaker Responsibility in the New Documentary Paradigms”