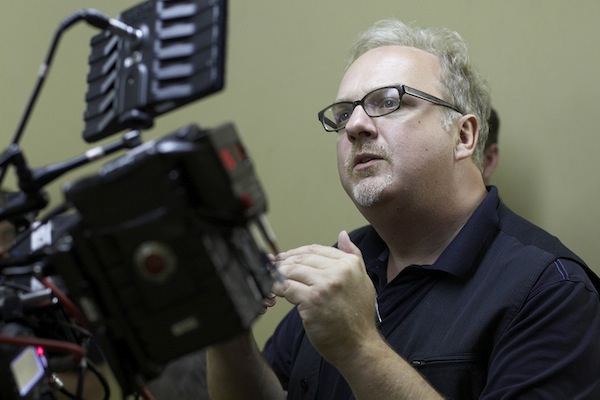 Director George Hickenlooper behind the scenes of "Casino Jack."

There’s no doubt that making a political film was meant to be in Casino Jack director George Hickenlooper’s future. (The film stars Kevin Spacey as disgraced lobbyist Jack Abramoff, reviewed here by The Independent.) After all, politics run in his blood. Literally. What no one knew at the time of the film’s world premiere at the Toronto International Film Festival (TIFF), is that it would immediately become Hickenlooper’s past, and the project will forever be associated with his untimely death at age 47. The Independent spoke with him at the Toronto International Film Festival.

Hickenlooper’s mother was an anti-war activist. She dragged him to many demonstrations as a young child and on one occasion, chained herself to the gates of General Dynamics, a manufacturer of the Napalm used in both Vietnam and Cambodia. Hickenlooper recalled being with his mother as she organized a blockade at the entrance of the San Francisco Bay to prevent the USS Enterprise, an enormous aircraft carrier, from leaving the bay. “Here we were, this armada of boats, literally underneath the Golden Gate Bridge…and all these sailors, lined up on the deck of the aircraft carrier, flashing peace signs because they agreed with us. It was a very powerful moment.”

These experiences set off the political junkie in Hickenlooper, and probably much to his mother’s chagrin, he became heavily involved with the Republican party while at Yale. An active member of the re-election campaign for President Reagan in 1984 and the conservative movement in general, Hickenlooper explained how he believed in the concept of individualism in America. “That’s what the US Constitution is about. It’s what the Declaration of Independence is about. It’s about separating ourselves from injustice in the Old World of persecution and coming to the New World and conquering the West. That sense of individualism and freedom is… a quality, despite its negative sides, that the rest of the world admires.”

Then, at least in Hickenlooper’s eyes, the conservative movement lost its sense of social obligation and civic stewardship. “[The movement] evolved into a culture of avarice, like, ‘what can I get for myself?’” he said. That’s when he grew disillusioned and where Hickenlooper felt his own story parallels that of Jack Abramoff, the subject of Casino Jack. “Not that I’m like Jack Abramoff,” he quickly interjected to avoid the criminal overtones. “What I want to say is that I identify with his journey: where he began as a strong idealist, a strong anti-communist, a belief in that individual spirit that went back to Reagan.”

Casino Jack sweeps viewers into the fast-paced world of “super lobbyist” Jack Abramoff (Spacey) and his sleazy, over-confident partner-in-crime Mike Scanlon (Barry Pepper). This is a world where politicians like Tom DeLay can be easily bought, lobbyists employ shady tactics, side-deals are made with Indian tribes, greed is intoxicating, and money as well as power rule the day. Sort of like the real world. In fact, exactly like the real world given that this is all based on a true story. The undoing of them all, however, is Abramoff’s last scheme, casino cruise ships, which get him into bed with an investor (Jon Lovitz) with ties to the mob.

Hickenlooper marveled at the fact that Abramoff, too, worked on the 1984 Reagan campaign. “He helped Reagan in Massachusetts, which was huge at that time,” he said. But then Abramoff got lost in his mission and, observed Hickenlooper, became a metaphor for the culture of greed over service, and all that contributed to the financial collapse the fall of 2008.

“I felt it was a story I could relate to,” said Hickenlooper. So he proceeded to find a writer and producer to develop what he thought was a fresh look at Washington. “Washington had never experienced anyone like Jack Abramoff before –That’s the way I wanted to look at it,” he said.

There is a particularly colorful scene in the movie where Abramoff goes before the Senate Hearing Committee and, to put things simply, speaks his mind. That scene came out of a conversation that Hickenlooper had with Abramoff during one of his visits to prison. “It was a very stark prison,” he recalled, “It was definitely not a minimum security prison.” No white collar criminals riding around in golf carts with their nine irons there.

According to Abramoff, when he went before the Senate Hearing Committee, he sat in a room filled with hypocrites. He went before McCain who accepted money from lobbyists like himself. He sat in front of Senators, who he helped get re-elected by holding events for them. And to each of their accusations he was instructed by his lawyer to plead the fifth. In the movie, he gets a chance to live out his fantasy instead.

At the time of this interview Abramoff had not yet seen the finished film, only parts, but Hickenlooper said the attention was a bit unsettling for him. In fact, when Hickenlooper first met with Abramoff, he tried to lobby Hickenlooper out of making the movie. “He said: ‘Your script is not very good, the story is not very commercial…” Still, Hickenlooper persisted and said that Abramoff, “sees [the film] as humanizing, making him feel a little less like the Satanic figure the media portrayed him to be.”

Abramoff struck Hickenlooper as being an incredibly charismatic person, “I felt like he could do stand-up comedy. He does impersonations.” This discovery significantly changed the script, much to the producers’ dismay. “I kept writing more scenes into the script and tossing older scenes out… I think I was able to sort of capture Jack’s heart and soul.”

But the film is not heavy-handed, rather it’s a fast-paced comedy embedded with elements of satire with the slightest hint of drama. The drama mostly comes in when everything spirals downward for Abramoff and his associates—all “good” things must come to an end. “It wasn’t like [we were] painting comedic brush strokes into the narrative so I could lure an audience,” he said. “It came out of an organic place because his story was that outrageous. Jack Abramoff is that outrageous and that colorful.” Indeed, a man who can pray in one breath and bribe a senator in the next, as portrayed in the film, does seem quite outrageous.

Hickenlooper admits that he was very inspired by Network and its masterful balance of similar tones. “It’s not done anymore and I’ll tell you why it’s not done,” said Hickenlooper. “It’s because the marketplace has become so crowded and it’s so difficult to get attention in the marketplace that movies aren’t generally as brave as they used to be because they’re harder to sell.”

“It’s either got to be a pure satire or pure drama or pure thriller. And as a result the marketplace has really restricted the breadth and scope of movies—in my view. I like movies that push the envelope in that sense. And some people aren’t used to that. Because a lot of film reviewers or critics or consumer guide reviewers or whoever they are—they are used to what the cookie cutter is. They’re used to what the marketplace has been dictating for the last decade.”

For Hickenlooper, it was also important that Casino Jackwould have an outside perspective on actual events: “I’ve always considered myself an outsider and my views have always been a little on the fringe—whether on the left or the right.” Having a Canadian producer, writer, and funding, as Casino Jack did, also helps when telling a story about Washington.

But does particular funding assure independence? With a major star such as Kevin Spacey, can a film be considered a true indie?

Hickenlooper began to say that there’s no such thing anymore—“it’s either an Ironman 2, or the rest.” But then he introduced an interesting notion, that the defining characteristic of independent film is being independent of distribution. “Films that purely play at films festivals and have no other economic apparatus or financial apparatus to support them in the marketplace—those are truly independent films.”

Having had a Canadian distributor in E1 and having signed a US distributor during TIFF, Casino Jack does not quite qualify for ‘independent film’ status in that context, yet it is not a large-budget film (shy of $10 million) and was not financed by a major studio. But whether it’s a studio film or an independent one, said Hickenlooper, “There is really never enough money or enough time.”

Perhaps Casino Jack can be considered truly ‘independent’ in terms of thought and politics? Hickenlooper no longer considered himself a Republican or a Democrat (though he supported President Obama and his cousin John Hickenlooper was just elected Governor of Colorado as a Democrat). Lest it be overstating the obvious: Hickenlooper defined himself as an independent.

“Jack received, in my view, a very harsh sentence because he technically didn’t really break the law. Lobbyists continue to do what he did. In my view, he was thrown under the bus by the Republicans because he was drawing too much attention to himself as a lobbyist. He was making too much money. He was too flamboyant. And he was drawing to much attention to K Street and that made a lot of lobbyists uncomfortable. So they found a way to throw him under the bus, which is what they did.”

His story is more relevant than ever nowadays, especially with the recent Supreme Court decision that allows for unlimited funds to be shuffled into political campaigns, even if they come from corporations. “If China wants to spend enough money now they can elect a president,” said Hickenlooper.

Still, despite any political views or strong opinions, Hickenlooper said that he is “not here to proselytize or preach political views in this movie.” He wants to entertain people. As simple as that. If audiences find out a bit more about lobbyists in Washington, even better. For all of Hickenlooper’s political convictions and passions, entertainment comes first.

Post-script:
To say that there is a cloud of shock over everyone who knew George Hickenlooper would be a gross understatement. One of the last things he had said to me was: “I have a feeling we’re going to be good friends for a long longtime.” The irony of life.

I hadn’t known George for very long, but he certainly left an impression. In fact, it was he who had suggested I do this interview and I regret that he never got to read it.

Somewhere in between the foggy glasses of Vodka (no olives) during our friendly conversations, I saw a deeply imperfect man, but also one whose great qualities overshadowed that. I was struck by his curiosity and thirst for life. His desire to be better. And just as things were starting to come full circle for him, he was taken. Life’s but a moment and you never know how long it will linger, but at least I know that George Hickenlooper lived his fully. Goodbye. I found you “very cool” too.
-KB