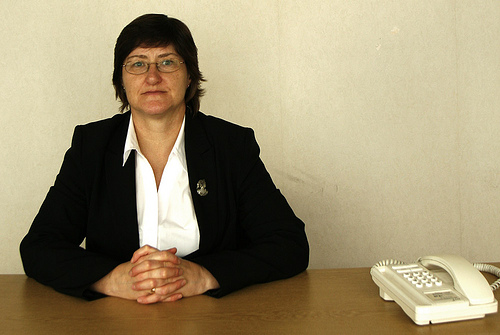 Waiting by the phone. Photo by Alan Cleaver.

“I’ll go on with the film when I find the right producer.” Keep looking!

Who wouldn’t want a producer or co-producer if working alone? Especially the right producer? The myth does not only concern the proverbial almighty producer, it can apply to anyone onto whom we project the magical powers that will lighten our load and finish the film. Sometimes it’s an editor. Or another editor. A distributor. Any distributor. A publicist, a funder, a… the list goes on.

Storytelling can get lonely, both literally and figuratively. Longing for company is understandable and in many cases even advisable. Yet more cooks don’t necessarily make a better stew, especially when, under the guise of needing a cook, we were just looking for a busboy! Producers are great, and good ones are invaluable. But waiting to go on with the film until finding one can put the documentary in eternal limbo.

Let the myth be deconstructed so filmmakers and producers can find each other and make a match in filmmaking heaven.

Since some Greek a few millennia ago begged a muse for inspiration, artists have been hooked on external stimulation and on both divine and earthly intervention for the rest of history.

Today we might not negotiate with ethereal beings for some clarity on how to proceed with story and production, but we often have equal expectations of a producer or editor. Troubadours may have sang on lonely nights for the muse to come. Now, filmmakers to advertise online.

Yes, having a superb, experienced, passionate crew is a terrific asset. The right producer can bring not just a Rolodex but know-how and renewed enthusiasm to a stalling project. So can the smart, skilled editor when summoned for the right reasons at the right time. A crew above or below the line is never something to dismiss or underestimate.

What’s questionable are all the imagined benefits filmmakers hope to gain from the mere fact of hiring people, not to mention the incredible denial it takes to forget the responsibilities and necessary adjustments that working in a team entails.

Working alone—that is, producing, directing, shooting, and editing—all alone—can be exhausting for some and liberating for others. Some dread the overload, others fear dependency. It’s all in the personality of the filmmaker.

For high-end professional projects, working alone may not be possible, yet some filmmakers manage to create isolation through a very vertical organization of the team that keeps him or her at some distance from the rest of the crew.

If it’s the filmmaker’s choice to work in such isolation, no harm is done. But if one is working alone while wishing for a team, the days can be long—very long! The problem is that many think they want a team when they’re really just looking for a solution to a particular problem. Filmmakers often wish they had a producer when in reality they want someone to do a budget or run errands or keep a schedule. Producers can do that, but they can and should offer so much more.

Others delay working on the story until their dream team is put together: they hope that when the dream producer takes on the daily tasks, they will be free to think and come up with the film that waits unformed in their desire. To their surprise, working with a team also takes time, and plenty of energy.

Many relationships start on the wrong foot because of this gap between the filmmaker’s need and the true job description of those being hired.

The first step in not falling for the myth of producers as saviors rather than partners is to make an honest profile of your needs. What are the reasons that are stopping you from moving forward with your film? The list might be long, but it can provide great insight into what are the real issues at the moment. From these findings, develop a job description, and add your hopes and wishes. How do you imagine that person? What hours of work would you expect? How much involvement? What could that person bring to the documentary? Then read your description to yourself, and if you still feel it is accurate show it to your friends or colleagues. Is this a job anybody would want?

Sometimes the mere act of putting something in writing will bring you the awareness you need to make an informed decision. You might realize an intern is enough to free up some mental space or get more done. Other times a colleague may suggest a potential co-producer based on your description. Then starts the long, always interesting process of interviewing and getting to know each other—but not until you’ve made sure that you’re looking for a team player and not a white knight or lady.

In a world of online social networking, it would seem that finding somebody for anything is a question of just a few clicks. But those we seek are also seeking… sometimes something or someone else.

Doctor’s Credentials: Internationally renowned author, speaker, and story consultant Fernanda Rossi has doctored over 300 documentaries, scripts, and fundraising trailers including the 2009 Academy Award® nominated The Garden by Scott Hamilton Kennedy and the 2007 Academy Award® nominated Recycled Life. In addition to private consultations, lectures, and seminars worldwide, she has served as festival juror and grant panelist. Ms. Rossi shares her knowledge and research of story structure and the creative process in columns and articles in trade publications. She is also the author of the book Trailer Mechanics: A Guide to Making your Documentary Fundraising Trailer.