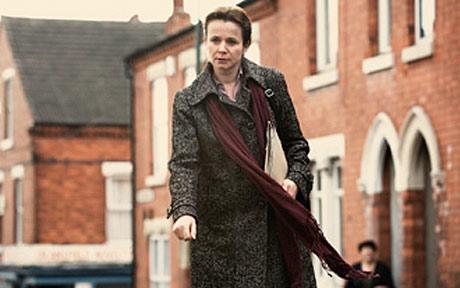 Emily Watson as Margaret Humphreys in "Oranges and Sunshine."

Just when you figured England had more than enough social and political crises on its hands and conscience—the Murdoch/Scotland Yard revelations, rioting in the streets and widespread youthful discontent, for openers—along comes Jim Loach’s knockout, tell-all drama, revealing that many generations of British children through the 1960s (perhaps as many as 130,000 and some as young as four) were told their parents were dead and were deported to Australia. Promised oranges-and-sunshine in a new life, most were shut away for years in forced-labor camps, settlement colonies, industrial farms, and institutions barely qualifying as orphanages. Many were sexually abused. Loach, the son of veteran director Ken Loach, along with producer Camilla Bray, began development of this movie in 2005. It’s based on the tireless and pioneering investigations of one Nottingham social worker, Margaret Humphreys (Emily Watson, in a career-transforming performance), who uncovered the appalling history of the deportations underwritten and systematically concealed by British officials going as far back as the 1600s.

A former child protection officer, Humphreys started reuniting parents and other relatives with missing children in 1986. She placed ads in Australian newspapers, seeking lost children. Dozens, then hundreds, responded. While her husband Mervyn (acted by Richard Dillane) researched genealogy records at Nottingham University, Humphreys formed and staffed the Child Migrant Trust in 1987 and wrote a book, Empty Cradles: One Woman’s Fight to Uncover Britain’s Most Shameful Secret (republished to coincide with the film). A 1989 Grenada TV doc (Lost Children Of The Empire) and a 1993 British TV dramatization (The Leaving of Liverpool) brought out thousands more distraught parents and abandoned children. As public awareness grew, the pushback from both countries’ governments, children’s charities, the Catholic Church, and even from some satisfied deportees grew increasingly bitter and vitriolic. For years Humphreys worked around the clock, traveling to and from Australia, suffering and enduring her own post-traumatic stress disorder and threats to her life.

In 2009 Australia’s Prime Minister, Kevin Rudd, issued a formal apology for this “ugly chapter in our nation’s history,” noting how “the forgotten Australians” were “taken from their families and placed in institutions where so often you were abused,” resulting in “the tragedy, the absolute tragedy, of childhoods lost.” Rudd’s counterpart, British Prime Minister Gordon Brown, issued a similar apology in 2010, noting that “until the late 1960s, successive UK governments supported child migration schemes… this country turned its back [so that] the voices of these children were not always heard, their cries for help were not always heeded. And we are sorry.”

Prime Ministers Rudd and Brown had to know that Loach’s film was in production, and they may have sensed that if they got far enough ahead of the curve, their stated apologies might be included as a wrap-up in a world class film (they are), thus providing a sense of government closure to the whole scandal. One can theorize that the combination of Humphreys’ continuing work today at age 65, coupled with Watson’s measured, quiet, steely and utterly believable screen performance (and the awards it may one day garner), may have helped to break their silence. Watson doesn’t play Humphreys as a savior, angel of mercy, or a whistle-blower; she’s a facilitator and a mom, and her laser focus remains fixed on reuniting aging parents with grown kids. There’s an unforgettable scene in which she calmly sits and talks to a dining hall full of hostile and visibly uncomfortable priests at the Bindoon Boys Town orphanage north of Perth in the Australian desert—she’s finally made it to the heart of an enemy camp, but there’s neither vengeance nor triumph in her words.

Watson gets admirable support from Hugo Weaving whose character finds his sister through Humphreys’ post-adoption group; from David Wenham whose character “stopped crying at the age of eight” but is able to go home at last to his mother; and from Richard Dillane as Humphreys’ supportive husband—all the acting and technical credits are first rate. Oranges and Sunshine is a production of the recently formed Cohen Media Group, which gave us Melissa Leo in Frozen River. This is one film company to watch.

In the emerging wave of new Romanian cinema, the misery index runs high. Three films that have nestled successfully in American indie cinemas include Police, Adjective (focusing on a sociopathic, by-the-book cop), The Death of Mr. Lazarescu (a dying alcoholic hauled through Bucharest’s broken hospital system), and Cristian Mungiu’s 4 Months, 3 Weeks and 2 Days, a closely observed, painful examination of backroom abortions. All three dramas are set in the waning years of the ultra-repressive regime of Nicolae Ceausescu, Romania’s ruling dictator from 1967 to 1989. All are glumly absorbing and carry the unspoken warning, “never again.”

In preparing his new, far lighter look-back at life in that grim era, Tales From the Golden Age (an ironic reference to the last decade of the brutal czar’s reign), writer/director Mungiu has said he was seeking “the feeling of Italian films of the 60s and 70s—popular, direct, and funny, revisiting cinema as a popular art.” And so he’s formatted Tales as a highly accessible, audience-friendly peek into six vignettes, each under 30 minutes, that tiptoe around and through the daily mess of lives lived in the bewildering chaos of communism. Mungiu scripted everything but has shared directing chores with Ioana Maria Uricaru, Hanno Hofer, Razvan Marculescu and Constantin Popescu—up-and-coming directors like himself, and all under the age of 45.

The half dozen Tales emerge as darkly amusing ensemble works, competently acted, conventionally paced, and refreshingly free of the endlessly long, meditative sequences that have come to signal Romania’s cinematic revival. Far and away the most memorable episode fastens on an unemployed college-age boy and his potential girlfriend who practice the time-honored tradition of collecting and redeeming empties (bottles and fruit jars) at state-owned stores. But because most urbanites save their empties for the few Romanian lei currency they’ll collect themselves, the young couple—well-dressed and well-spoken—make their way through apartment complexes, posing as representatives of the Ministry of Environment and asking for bottles and jars so they can collect water and air samples from each apartment. People comply because their water is brownish and the air quality is lousy. The couple’s names are Bugni and Crina, and clearly they’re intended to be a Romanian version of Bonnie and Clyde. Eventually authorities arrest the boy and we never learn whether his father, a party official, keeps him from being shipped off to Siberia.

The other five episodes are similarly inventive demonstrations of how a confused and dispirited people survived a terrible era. Together they make Tales of the Golden Age a rueful but breezily entertaining slice of Romanian history. Call it Ceausescu Lite.