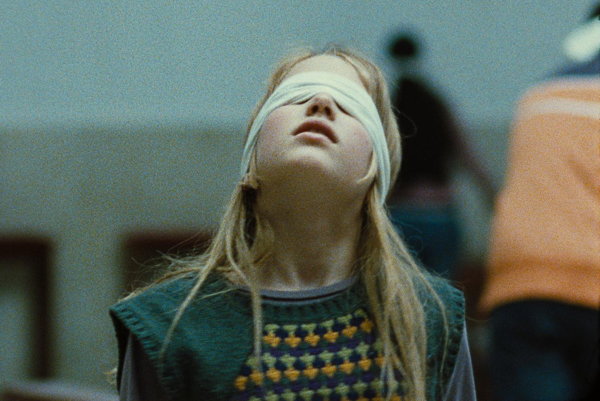 The title of Alice Rohrwacher’s perceptive and closely observed first feature translates to “divine body” and references a larger-than-life statue of Christ tucked in an abandoned Italian church near Calabria. Father Don Mario (Salvatore Cantalupo in a far more delicately conceived role than in the crime thriller Gomorrah) drives to remove the ornately carved wooden cross, accompanied by the 13-year-old Marta (Yle Vianello), a candidate in the Calabria church’s confirmation class.

Don Mario has found Marta wandering along a busy superhighway, where she’s followed one of his employees and watched him throw a bag of kittens into a river to drown. Reluctantly Marta accepts a ride with Don Mario to the rural church that houses the wooden cross, and together they carry it to the priest’s car, where he ties it to the roof. He’s hauling this figurative crucifix back to Calabria for Marta’s confirmation ceremony—but something untoward happens along the way.

This is the key scene in a film that opens with Marta, her 18-year-old sister, and their mother, arriving back at Marta’s birthplace after 10 years in Switzerland. Both girls appear to be more cosmopolitan than their classmates. The mother (Anita Caprioli) has taken a job in a local bakery and seems completely comfortable under the daily nurture and regimented care of the Catholic Church. Life in Calabria is still operating largely in an ancient time warp, even though Don Mario’s church sanctuary contains a bright neon crucifix.

For her part, Marta is alternately content and discontent with Catholic dogma. She senses the priest and her own extended family are trying to conform her to the teachings of the Church. Writer/director Rohrwacher is even-handed and objective about letting the sensitive Marta witness all this without protest, but also without letting herself be given over to Church doctrine like her classmates. She’s a rote believer but we sense she’s open to alternatives. She’s trying to decide what she believes and doesn’t believe. What happens to the cross on the priest’s car roof can thus be interpreted as fate, chance, human error or, if you wish, divine intervention.

Corpo celeste‘s delicate balance of religious issues differs from other recent coming-of-age films with girls transitioning into teens and young womanhood. The Holy Girl, Water Lilies, XXY, and She-Monkeys are among the most memorable, and Corpo celeste immediately joins their distinguished company. All were directed by women and all have a firm feminine sensibility that the viewer comes to trust and that is becoming increasingly rare in contemporary cinema.

The 27-year-old director has suggested Calabria is a metropolis in messy transition—raw, industrial, untended, an urban sprawl—not entirely unlike her teenage protagonist with her short, newly chopped-off hair. Families like Marta’s return to the security of relatives’ homes in Calabria because life hasn’t worked out elsewhere. The Church offers a haven of comfort and salvation. Don Mario represents a hierarchy locked into the city’s political establishment; each needs and supports the other.

It is only when Marta encounters a stern, barely sighted and much older priest in the adjacent town with the wooden cross that she hears a different take on Jesus—one far removed from the benign figure she’s studying in her catechism. This is immediately reinforced by the incident on the car trip back to Calabria. Marta discovers that the “divine body” of the film’s title can be broken and lost.

In the picture’s moving and mysterious coda, we follow Marta as she wades through a deserted urban river under a bridge, soaking her confirmation dress. It’s near a spooky, desolate culvert. This time she encounters a boy her age who holds out something he’s found living in this polluted swamp. “Want to see a miracle?” he asks her. It’s not a kitten. Marta is growing up.