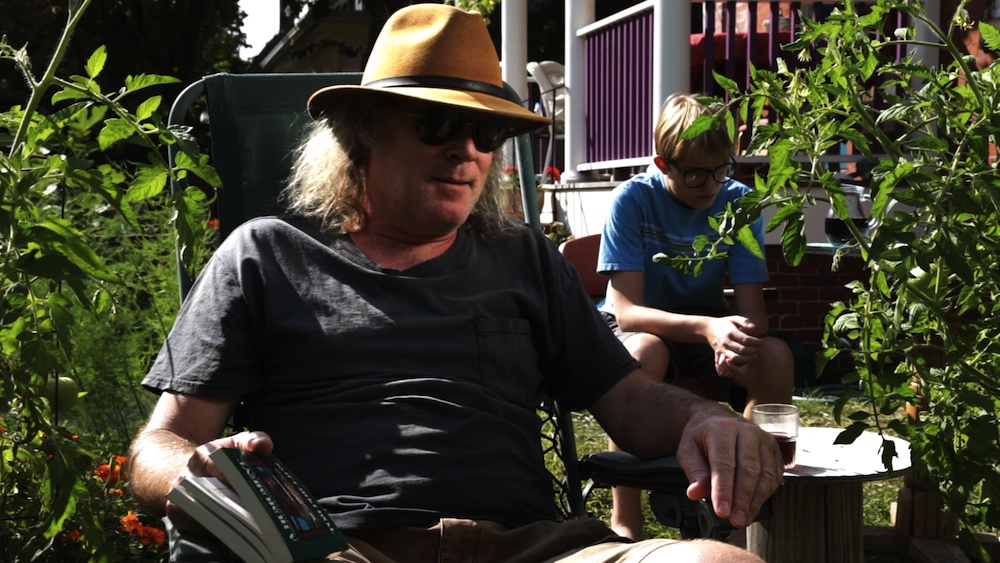 Providence, Rhode Island, director Laura Colella was gearing up for the Los Angeles Film Festival earlier this week. Her third narrative feature, Breakfast With Curtis, will get its world premiere screening before an audience on June 14th. Colella has won more than 20 awards for her previous work and was one of Filmmaker Magazine’s 25 New Faces of Independent Film. She currently teaches at the Rhode Island School of Design.

David Pierotti: So how did this film get started? I read that another project stalled and so you turned your attention to this?

Laura Colella: I had been working on this particular project for three years and I had done a lot of preparations for it. But it was hard to get something with a larger budget off the ground so I decided what I needed to do was make something simpler that I could just get out and do. So I wrote it pretty quickly in June and shot most of it in August. Some scenes were shot in the fall and winter and then there was over a year of editing.

As many writers do, Colella chose to write about what was nearest to her. For the past 15 years, she has shared a three-unit house with four other people. They’ve become friends and often spend time together in their common yard or porch. The family next door, a couple and their teenage son, enlarges this group. So naturally, the characters in her life wound up as characters in her script. But interestingly, Laura went a step further. She asked these people, none whom are professional actors, to be in her movie.

DP: None of these people are actors, but they all seem very relaxed and comfortable in front of the camera. Can you talk a bit about how you directed them?

Colella: They were immediately committed to the project so we brainstormed ideas together. But it’s not a documentary. Everything that happens is fictional. Everyone is not really playing themselves but characters informed by themselves. Because I had a relationship with them, it helped navigate through any problems that might come up. And they were very trusting and very open. Much of that happens during the editing process as well.

DP: Was much of this scripted or worked out with the actors?

Colella: It was all scripted. I developed the material by interviewing people. It helped, understanding their speech patterns from knowing them for as long as I have.

This familiarity may have helped the writing but it also pays off on the screen. There is chemistry between these people, an authenticity born of years of shared experience that a few days of rehearsals can’t achieve between strangers. Sometimes when a movie gives the impression that the people making it had a ball, the fun fails to translate to the viewer, but with Breakfast with Curtis I found myself wanting to stop by, sit on their porch and have a drink.

DP: The movie has this very evocative, wonderful, summery, relaxed feel. Was that something you were going after?

Colella: Yeah, part of the feeling I had that this would make a good film was knowing these people and the setting and believing the experience I had of them and this place could be conveyed to others. It helped that it’s a visually interesting location with spaces and yards that have really been lived in. I’ve had several people say how they felt a connection and wanted to stop by so that’s been satisfying.

The film is nominally about a shy, withdrawn teenager named Curtis, who, years before, became the source of conflict and grudges between neighbors. Over the course of a summer, Curtis helps the free spirit, Syd, with his video blog project and in doing so emerges from his shell and helps reconcile Syd with his father. Now, if you have even a few years of TV watching experience, you could easily envision familiar patterns of redemption, overcoming odds, and sentimental tears. Except no, these scenes aren’t in Breakfast with Curtis. Instead, these strands of conflict are sublimated beneath the simple process of living in close proximity.

DP: The conflict here is very subdued, were you ever concerned how audiences would react, when we are more accustomed to having it front and center?

Colella: These issues are central to my work. This is my third feature and none of them are conflict-driven. I’m more interested in the more subtle aspects of experiences. Reality has a far greater range of human experience that we can draw upon and examine in films. I think these types of films are more complex by nature, not that they are random or meandering… they are carefully crafted to convey other emotions. I didn’t go in the direction of simple conflict because that’s not what I wanted the film to be about.

DP: You raise this notion of the ‘seminal summer.’ What is that to you?

Colella: I think everyone has a particular summer when your life took a real shift and remains central in your memory and who you are. I think it could be a summer that kind of shook up your world a bit and sent it in a different direction.

The universality of this experience may help explain why the film is resonating with people. It also helps that it looks fantastic. The colors are vibrant, the compositions are meticulous, and it has all the hallmarks of a well-constructed film. None of the jittery hand-held camerawork or uneven lighting that mar most low-budget movies.

DP: Other filmmakers might get intimidated or paralyzed by the lack of money or other resources, particularly after having a project get stalled. Can you talk about how you managed to overcome this?

Colella: I feel like now more than ever anyone who really wants to make a film can do it, even one of high enough quality to put out into the world for audiences because of the new technology. This was really a no-budget film. In theory, the materials are more accessible today than ever before. On the other hand, I’ve been doing this for many years and have a lot of experience in many aspects of the filmmaking process.

DP: This is now headed out on the film festival circuit. Can you tell us about that process?

Colella: [The Los Angeles Film Festival] is my first festival with this project. The last time I did this was 2006. For the most part I really enjoy going to festivals to see the work with an audience as well as the work of other filmmakers. The process of entering the festivals, however, can be very frustrating. But being able to see it on a big screen with other people is very rewarding. It’s a crapshoot though. I was rejected by some I thought I’d get into and accepted by others I didn’t think I had a chance with. You never know, it’s very unpredictable. You have to have a very thick skin and just keep at it.

DP: Any other screenings scheduled?

DP: So what’s the goal now?

Colella: The goal is always to make another film but I’m hoping this film can get in front of many people as possible.

I have a feeling that’s not going to be a problem.