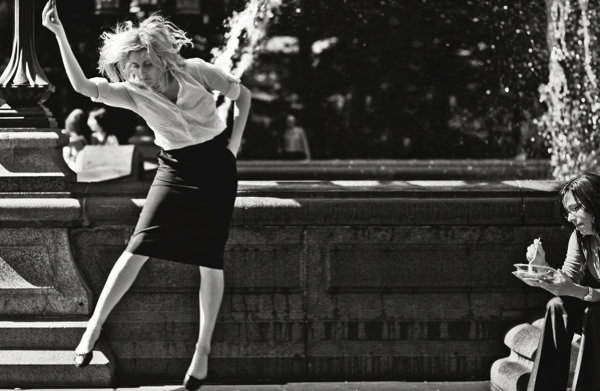 Woody Allen and master DP Gordon Willis nailed Manhattan’s Upper East Side with their angst and culture-driven lifestyles better than any other filmmaker in his 1979 Manhattan, shot in gleaming black-and-white. More than three decades later, Noah Baumbach and DP Sam Levy have captured Brooklyn (and Manhattan’s) 20-somethings in all their overeducated and underemployed lifestyles better than any other contemporary filmmaker, and also in razor-sharp black-and-white. Baumbach’s triumph is his co-screenwriter and eponymous star, Greta Gerwig, who plays the 27-year-old Vassar grad and apprentice dancer, Frances.

Baumbach and Gerwig carefully sidestep the flaws of other mopey indies like Lena Dunham’s Tiny Furniture, Zoe Kazan’s Exploding Girl, the Soho-based Momma’s Man, and even Terrence Nance’s more buoyant and inventive An Oversimplication of Her Beauty. These mini-dramadies posit slackers stuck in the discouraging limbo between graduation and career paths they can’t or won’t negotiate. Frances is, in her own words, “undateable,” as she and her roommate Sophie (a salty-mouthed Mickey Sumner), who has boyfriends and works at Random House, navigate the social scene from their Chinatown walkup. But when Sophie moves to Brooklyn, Frances takes a $950-a-month share with two dudes who toil on skits for SNL that never seem to go anyplace.

Frances may be undateable, but she’s a likeable clown, a fast-talking near-motor mouth who’s not above hanging over the third rail at the dangerous end of subway platforms. Frances is tall and big-boned and sometimes klutzy as a dancer, and we sense from the start she won’t be admitted to the company. She hasn’t learned to drink very well, and even sober she sometimes falls in the street. She tells people she reads more than Sophie but we almost never see her with a book. She’s told she looks older than 27 but “far less mature.” At a dinner party with corporate grown-ups she’s way out of her conversational depth. She’s a work-in-progress, a tentative New Yorker who’s still more at home with her patient and loving parents in Sacramento, whom she visits. She also travels to Paris on a whim over a weekend, where she’s alone, lonely and inert. When she returns to Vassar’s campus in Poughkeepsie as a welcoming hostess and wine pourer, she discovers Sophie, drunk and unhappy with her Wall Street fiancé, about to be transferred to Japan. Nothing seems to be working out for anyone.

Out of these outwardly meager pickings emerges a movie that stubbornly keeps trying to win your heart, and eventually does. Frances’s crowning victory is seen outside the apartment she takes in Washington Heights, on her little hand-lettered mailbox sticker, which shows only the first two letters—HA—of her last name. She can’t even get her mailbox name put up correctly, but we forgive her; we’ve seen the dance company hire her as a teacher and choreographer, and we’ve viewed her class’s initial recital as a modest, hopeful success. Frances appears to be on her way at last. (You can bet world class producer Scott Rudin wouldn’t have it any other way.)

Baumbach told a packed theater at Lincoln Center that he wanted to duplicate the feel of Paul McCartney’s later albums that were “highly professional while retaining a homemade feel.” He also uses frequent references to the films and music scores of Francois Truffaut. Baumbach, like Truffaut, is an uncommon auteur whose instincts this critic invariably trusts. Greta Gerwig, his leading lady who’s become his real-life partner and probably authored the lion’s share of the film’s sharp, bitingly of-the-moment screenplay, has the acting chops to open this film. And she has something more: a visual presence, dark eyebrows and high-cheekbones—a curious, inviting mix of Anne Heche welded onto a young Cybil Shepherd frame. She’s an original, and so is this movie. Frances Ha is the first major breakthrough of the 50th NYFF.