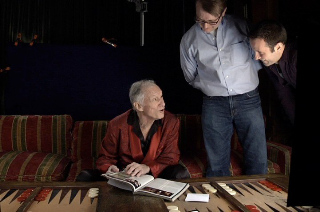 There’s a short clip from The Simpsons in the new documentary Plimpton! Starring George Plimpton as Himself where George Plimpton, playing himself in a fashion, says “and now I’ll go back to doing whatever it is I do.” If you are of a certain age, this made perfect sense. You always recognized George Plimpton, from commercials, late night talk shows, cameos in various movies and TV shows, but most people couldn’t precisely say how he became famous in the first place. He was essentially famous for being famous. Such a thing is commonplace these days, so in that sense, like in many others, he was ahead of his time.

But George Plimpton led a remarkable and accomplished life long before he was animated with Homer. As co-director of the documentary about Plimpton, Tom Bean said of his subject, “he’s one of those people whose life would be hard to believe if it wasn’t real.” Plimpton co-founded the literary journal The Paris Review in 1953, which since then has helped launch an almost ridiculous number of careers. His own writing gave birth to a genre he called ‘participatory journalism’ that, in turn, led to several television specials, which, Bean asserts, “literally created reality TV.” All this while being the center of New York’s literary scene. Plimpton! Starring George Plimpton as Himself will premiere in New York on May 22nd and then screen in Los Angeles June 6th and Boston on June 22nd.

The Independent’s David Pierotti spoke with directors Tom Bean and Luke Poling about George Plimpton and the process of making a documentary.

David Pierotti: How did the two of you get interested in George and involved in this project?

Luke Poling: Tom and I have written together for a while and talked about doing a documentary. One day I just said ‘what about Plimpton?’ We both thought it was a great idea and were actually surprised no one had done it before.

DP: Because you can’t shoot new footage (George Plimpton died in 2003) I imagine the challenge was to pick and choose what goes in and what doesn’t.

Poling: Our goal from the beginning was to avoid a narrator and let George’s voice tell most of the story.

Tom Bean: Yes, absolutely, we shot about 60 short interviews but this took over two years to edit. But we worked with two wonderful editors, Maya Hawke and Casey Brook. It was a very long and very exploratory process and one that was frustrating and difficult, but also very rewarding.

DP: In a life as varied as his, how did you find a narrative to form the film around?

Poling: The narrative just happened concurrently as we made the film. It took a while to see how all the pieces would fit together. It was a lot of trial and error.

Bean: George functioned in this intersection between high and low art. In his life he’s this impresario who embodies the NY literary scene but on TV he would play this bumbling guy who would fail and fall off the trapeze. I think this is where we found the moments of conflict that create a narrative.

See The Independent’s interview with Kris Meyer, executive producer of Plimpton! Starring George Plimpton as Himself, on our Facebook page, to read about how he got involved with the filmmaking duo.