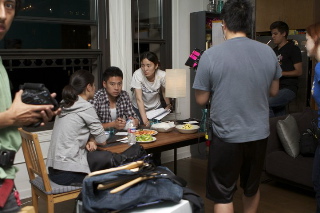 Lu Lu is expanding "An Early Summer" (here on set) into a feature.

Lu Lu is no stranger to a language gap. Even her name is a constant source of confusion in America. “They ask me my first name. I say ‘Lu.’ Then they ask me for my last name, and I say ‘Lu.’ They think I misunderstood them.” In Chinese, the characters, while pronounced the same, are written differently. In English, though, Lu Lu’s first and last name are identical. She laughs, being frank, “My name in Chinese is ordinary, but when I came to the US, people think it is interesting.”

Lu Lu traveled to the US after she studied broadcast journalism at Fudan University in Shanghai and worked in documentary film. When she arrived at the University of Southern California School of the Cinematic Arts to pursue her MFA in film production, she felt a tug between the two cultures.

“My first year here was very difficult. In China, we learned to read and write English, but rarely spoke it. Gradually, I began to feel like I had an advantage because filmmaking is all about visually telling people a story.” It is quite evident how quickly Lu Lu mastered the language of filmmaking. Her short film, An Early Summer, was recognized in the 2012 Director’s Guild of America Student Film Awards in the Asian American category. It lands her on The Independent’s 10 to Watch list.

An Early Summer is a dramatic short film that follows the lives of two Chinese young adults in America. Ming, the main character, is a recent college graduate, navigating the American finance job market. His father, never seen but clearly understood in the film, pressures Ming to return to China to pursue a career there. A childhood friend, Ann, arrives in America to study architecture, and the two find themselves spending time together… cooking. Ming, who grew up in a restaurant family, reveals to Ann, in a touching moment, that he has actually never cooked for anyone before her. By then, of course, Ming has to go back to China, as he promised his father. The film leaves the audiences’ hearts aching for more. We sense that loss and longing, despite the fact that most of the film is in a foreign language.

Lu Lu says, “It was important for me that the characters in the film are from single child families. In China, they implemented the single child policy to control population. Most of the people in my generation, they don’t have the opportunity to share their emotions with a sibling. The parents give their kids as much as they can because they’re the only hope for the family.” This single-channel pressure is certainly palpable in the film, but it isn’t ever explicitly stated: a true cinematic feat.

The film was shot over seven days in southern California. Like many film productions, there were unforeseeable events that occurred during shooting. “We had an accident,” Lu Lu says. During one of the final (and gorgeously scenic) shots of An Early Summer, Grace Ih, the actress who plays Ann, suffered from heatstroke. Even two months after the incident, the actress did not want to go back to the location. “I was really worried about the actress, but I also needed to finish the project.” Lu Lu and her crew solved the issue by using a body double to finish the scene. “It goes back to documentary filmmaking. You got what you got and you have to make it work.”

Lu Lu is currently developing her 17-minute short film into a feature length screenplay. “The most challenging part is figuring out what happens to these two characters. They have feelings for each other, but they are also trying to focus on their own futures.”

Lu Lu has been deriving a lot of her research and inspiration from her own life and those of her friends, who are learning to navigate the post-graduate life. If Lu Lu’s feature version of An Early Summer is anything like the short, we’ll expect nothing less than stunning visuals (especially of the food), a tight plot, and a tear-jerking musical score that can be watched, enjoyed and understood by a global audience.

Check out The Independent’s Facebook interview with Henry Chen, producer on An Early Summer.