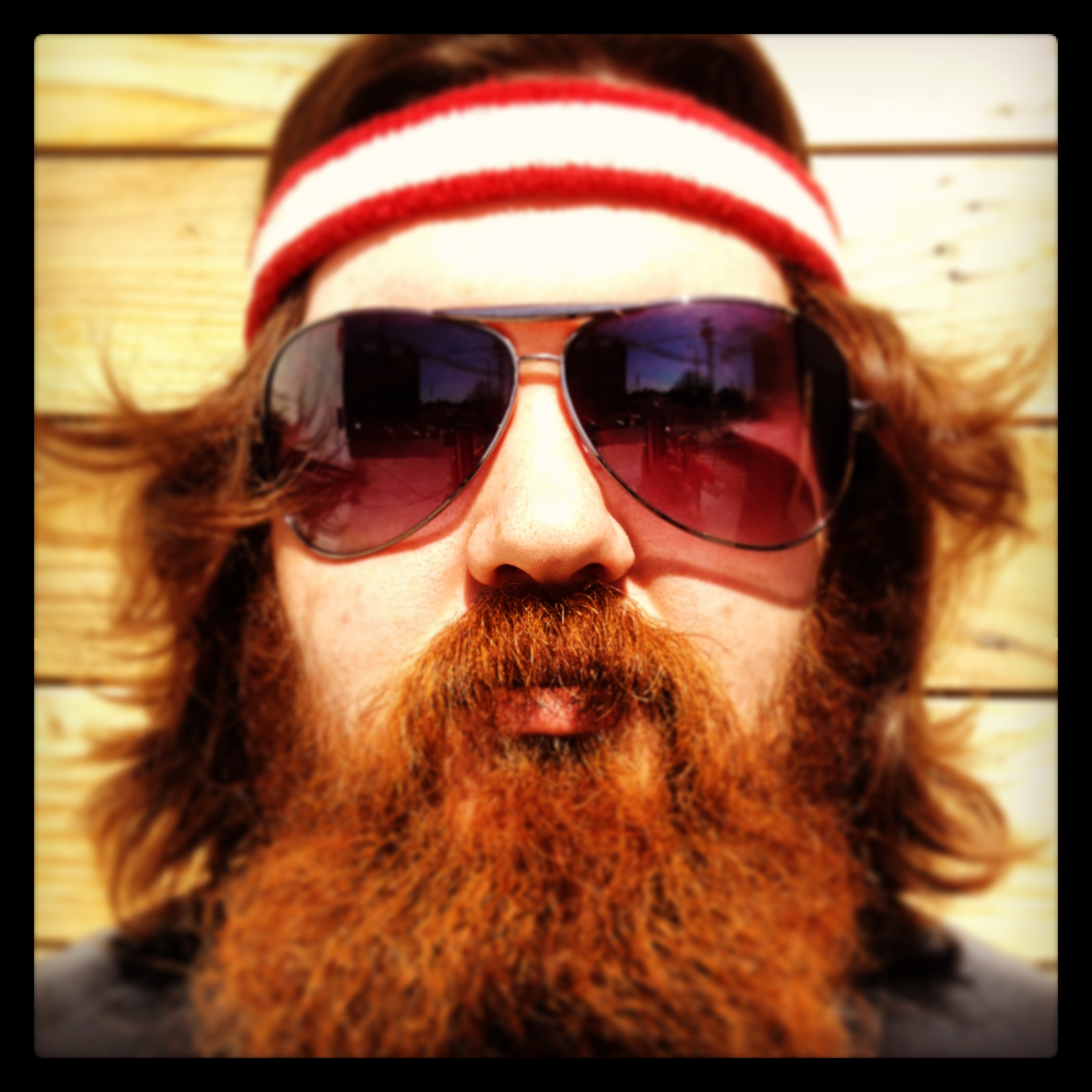 Somewhere under there is filmmaker John Alan Thompson, one of our 10 to Watch in 2013.

John Alan Thompson is a man who promulgates the world of the bizarre, the supernatural, and the surreal. Moving from place to place when he was a child exposed Thompson to a variety of environments. But, it was in Texas where he directly confronted death: Thompson’s Little League baseball team had just won a game. Spirits soared. Bellies were full with pizza. There were too many kids and too little car, so he sat in the back of the pick up truck. The coach, who was dropping them back home, ran a stop sign at 75 miles per hour. He didn’t see the car that pulled out. In a flash, Thompson was catapulted from the back of the truck into a ditch, head first.

“It’s a goddamn miracle I’m alive,” he says, “and that I didn’t sustain massive brain damage or break my neck.” Despite the traumatic injuries, John says he never felt scared or panicked. “It was so intense… everything looked different, felt different, sounded different… It was like being in a dream, but it was reality. For me, there was something about this very otherworldly experience that I am drawn to. It has certainly affected my filmmaking.”

The resulting barrage of neck and jaw problems, coupled with severe dyslexia, made school hellish. “It was really frustrating because it makes you feel stupid, and that’s never fun. There was always a part of me that didn’t know how to express something. I didn’t feel like I was clicking right with the world.” But at 15, he picked up a video camera, and “all of a sudden, it felt like a new kind of language and grammar. It was really exciting. I feel so fortunate because there are plenty of people who wrestle with what to do in life. I got that when I was 15 and that never changed.”

Filmmaking is where Thompson found his flow, as can be seen from his impressive track record. Thompson’s first graduate school film, Songbird, premiered at the Sundance Film Festival. His short film, Breathe, was nominated for a student Academy Award.

His current project, Lend a Hand for Love, due to finish production later this year, has been backed by some big players. It received a coveted grant from the Princess Grace Foundation. Panavision donated “the best camera package in the world,” Thompson says. The motion control team from Peter Jackson’s The Hobbit donated their highly specialized skills.

Lend a Hand for Love is a highly unconventional love story, starring Pat Healy (Compliance) as “Clarence” and Kali Rocha (Grey’s Anatomy, Buffy the Vampire Slayer) as “Ernestine.” The characters are awkward and shy, unable to outwardly express their love for each other. So, their bodies take matters literally into their own hands. Clarence and Ernestine’s hands detach from their bodies at night and form a relationship of their own. Robert Wagner lends his legendary ladies-man voice to round out this unusual love story. The story is quirky, comical, and full of heart — words that could also easily describe Thompson himself.

The film’s execution has been just as novel as its story. Each shot is a composite shot: the crew filmed a miniature set, and the next week, they filmed actors against a green screen. “The miniature was built to a one foot to one inch scale. We needed motion control equipment, special lenses, special cameras, a crew of highly specialized people who had been at their craft for a long time.” Thompson admits, “It’s the most technically challenging project I’ve ever done. And with our budget, it’s a miracle we’ve even gotten this far.”

Almost 300 people people backed the Kickstarter campaign alone, helping the production team surpass their goal. Coupled with the support they’ve received from Panasonic and General Lift (Jackson’s team from The Hobbit), Lend a Hand for Love is teeming with an audience and crew that want to see it succeed.

Thompson and his sister Amy Thompson (who produced the film), say their goal for the film is to “spread that message of confronting fear and finding joy…and ultimately, we want to go to the Academy Awards. We want to be a contender for best short Film.” With 80 percent of the film done, and with the new hand prosthetics nearly finished, Thompson is ready to wow the world with Lend a Hand for Love.

John Alan Thompson’s sister and producer on Lend a Hand for Love, Amy Thompson, talks with us about growing up with John on our Facebook page.