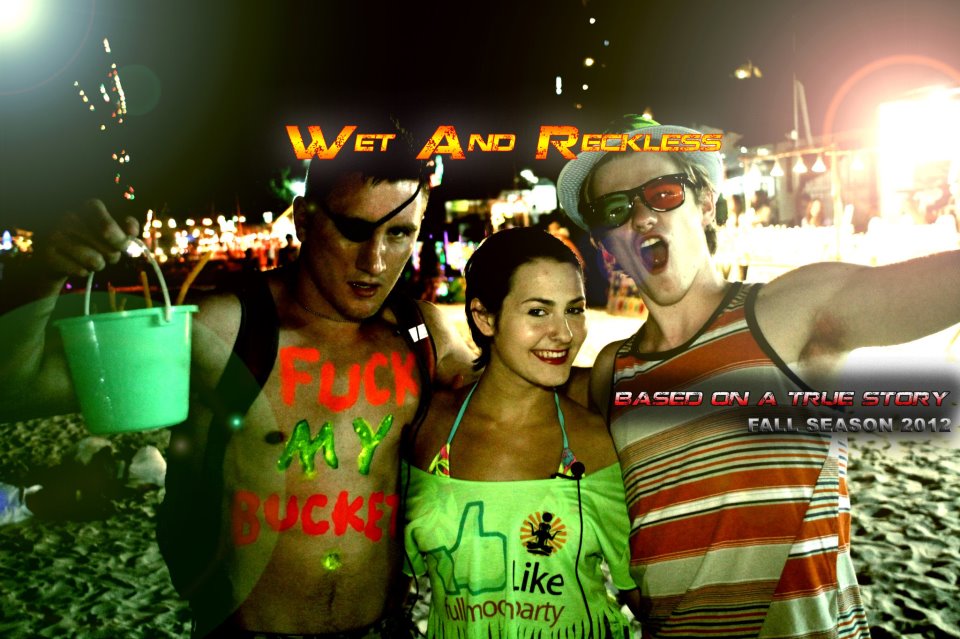 On location in Thailand for #wetandreckless.

In the land of Hollywood hyphens, the Trost family shares more than titles and a familiar last name. Together, they have enough skills to staff their own projects. That’s one reason brother and sister Jason Trost and Sarah Trost recently collaborated on three indie features: The FP, All Super Heroes Must Die, and Wet and Reckless. Jason served as writer-director-actor-producer, and Sarah as costume designer-camera operator-hair-makeup and other duties as assigned.

Their grandfather, Scott Maitland, worked in TV and film as UPM-1st AD, winning a Directors Guild Award along with Clint Eastwood for Unforgiven, while grandmother Carol Trost Maitland was an actress-model-spokeswoman-production coordinator. Their father, well-know special effects coordinator Ron Trost, has his share of hyphens as construction coordinator-scenic artist-executive producer. Brother Brandon Trost, director of photography-writer-director-producer-SFX assistant, is an in-demand cinematographer on films from Ron Zombie’s Halloween II to This Is the End. Though both father and brother have busy careers, they’ve each lent a hand or two in some capacity with Jason’s three films.

In a conference call with The Independent’s Rebecca Reynolds, Jason and Sarah explain where they fit on this family tree.

Jason Trost: I’ve pretty much worked in every department in movies. I’ve been a costume assistant, worked in the art department, as a special effects assistant, camera operator, grip, and electrician. I think it’s important if you’re going to be a director and the captain of the ship that you know how the entire ship works. Most directors’ problems, especially in independent movies, they’ll be like, ‘Okay, let’s change this.’ And they’ll have no idea what goes into what they just asked for. So they’re really mad when it doesn’t happen in five minutes. If you really want it, chill out and wait an hour. Don’t freak out on your crew.

Sarah Trost: I’ve done costume design, wardrobe department, assistant designer, costumer, seamstress, and I’ve worked in special effects with my dad on quite a few projects. I’ll help him on the accounting for the special effects department, which is not dissimilar from running my own department. I’ve done some production design work, and I was the camera operator when we went to Thailand for the majority of Wet and Reckless.

Jason: I was like, ‘You watch a lot of reality TV. Here, take this camera.’

Sarah: I’d never run a camera before. Oh, and I also did makeup and hair.

Rebecca Reynolds: Your first feature, The FP, is a dystopian comedy you made for $45,000 in a barn.

Sarah: Our dad collects materials—cars, old junk steel, piles and piles of things that he thinks he’ll use some time. It’s pretty incredible.

RR: And for your costume design?

Sarah: A lot of the clothing came from the local thrift store, what I had in fabric storage, plus we had all these clothes from when we were little kids. We dumped everything out in the top floor of my dad’s barn. The bottom floor is where we filmed much of the movie. We had huge piles of clothes, and we went through them, anything that would work, that I could dye and then put back together.

RR: The FP premiered at SXFantastic in Austin in 2011 and is distributed by Drafthouse Films. It’s about the life and death struggle between two rival gangs, who battle it out in a dance video game. What makes this a comedy?

Jason: I think it’s because it’s hard to take silly and stupid seriously, so it had to be a comedy. I like action movies, but I think sometimes they take themselves a little too seriously. They kind of bum you out.

Jason: Yeah, it’s basically taking the 1980s action movie storyline then copying and pasting it into a movie today. I wanted it to be like a movie from the 80s that maybe you just never saw.

RR: And the film’s design is based on the Civil War?

Jason: Originally I had the movie based on the Vietnam War. Sarah said the Civil War is perfect because we have the North and the South. I was like, that’s stupid. Then a week later I stole her idea: colors, lighting, everything.

Sarah: I incorporated the colors from the Northern and Southern armies into the team wear.

Sarah: They’re the prefixes of the phone numbers in our hometown area. Frazier Park is sort of south of Lebec. The towns are separated by two miles.

RR: How did you fund The FP?

Jason: It wasn’t that much really, 45 grand. We really didn’t fund it. We just had friends and family who all threw enough money into the tip jar basically, and the movie got made.

RR: Your second film is a sci-fi thriller, All Super Heroes Must Die, starring Lucas Till, aka “Alex Summers/Havoc” in X-Men: First Class. How did you all hook up?

Sarah: I was the costume designer on Laid to Rest, and Jason came with me as my costume assistant. He and Lucas ended up becoming friends.

Jason: You make better friends when you’re at war, and that’s what that film was.

RR You and Lucas have since formed your own company with Tom Sullivan. Where did you come up with the name Grindfist Pictures?

RR: Your second Grindfist film is the action/adventure comedy, Wet and Reckless, which is described as a reality TV show gone horribly wrong. You filmed it on location in Thailand in two and a half weeks, again for little to no money. How many people did you take to Asia?

Jason: Four, including myself: two actors (Lucas Till and Scout Taylor-Compton) and Sarah. All actors, when they weren’t in the shot, did something crew-related.

RR: Wow. What were you thinking?

[Both Sarah and Jason laugh.]

Jason: We were thinking incredible production value for no money.

Sarah: We took the majority of the pieces with us. I picked up a lot of pieces; then I cut, fitted and re-dyed them.

RR: Any tips of the trade?

Sarah: It’s better to have a lot of skill sets. I can sew, I can pattern make, I can build, sketch, and paint. Develop skills, then you can make or do whatever you want. If I didn’t know how to sew, I wouldn’t have been able to make any of the movies I’ve made at this point.

Jason: Don’t ever give up. And also realize this is your full time job. It’s all or nothing.

Jason: I’ve got several things. It’s all which one gets funded first gets made first. I have five things up in the air. I’m working on something with the director of Hatchet III. I can’t really say too much, but hopefully we can do it in the fall.

Sarah: I’m pretty much in the same boat. Anything Jason directs or writes, I usually get the pleasure of costume designing.

RR: Finally, do you ever disagree?

Jason: We disagree all the time. But we disagree well. I think it’s easier to work with siblings, because you’re stuck with each other. A friend might draw the line and walk away. I like the fact that if something bad happens, they’re still there.

Sarah: You can also push each other a little bit harder, too. You can work a little bit better and be more creative. That’s kind of cool.

Jason: One thing for sure… [Sarah’s] always going to tell me if something sucks. That’s one of the most important things. Add that to the list. Number one tip: have someone around who doesn’t blow smoke up your ass. The quickest way to make a terrible movie is to have people around who say yes all the time.