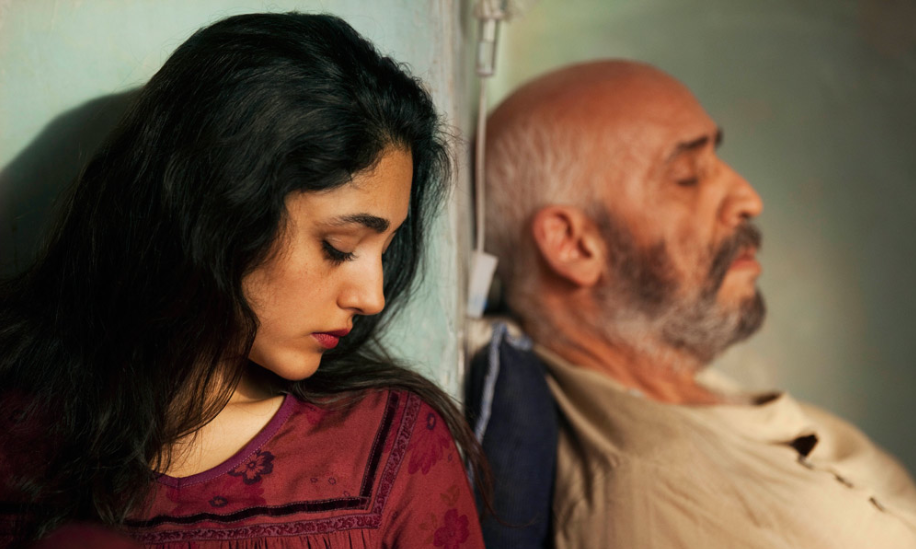 First let’s briefly summarize three films you may be aware of, all themed around women in various states of acute mental and emotional collapse. Stay with us as we trudge a path toward the single picture worth your wait.

The Canyons. Director Paul Schrader said this about his new movie pairing Lindsay Lohan with porn star James Deen: “All the drama, the mishegaas, all the stress—that means little. A director can shoot around misbehavior. He can’t shoot around lack of charisma.” Schrader is right; Lohan has the life experiences of extreme despair and angst etched all over her puffy, sullen face and newly thick body. Look at her here and compare to her appearance six years ago in Robert Altman’s A Prairie Home Companion, when she could still act a fresh-faced post-teen. You’re watching an aging process not seen since the jazz trumpet virtuoso Chet Baker lost his dream-boy looks by turning into a ravaged heroin addict.

What’s even more unfortunate is that Lohan’s worst fear in agreeing to be in Schrader’s movie—that she’d be upstaged by Deen—has come true. Playing a psycho film producer, Deen happens to resemble, from certain angles and a variety of line readings, New York’s disgraced mayoral hopeful, Anthony Weiner. With his lean body and chiseled looks, Deen’s loony tunes producer keeps staring into and playing with his mobile instrument through the whole picture, and you imagine him sexting poor young things to be in his next awful movie. You can’t take your eyes off Deen’s, and it’s his picture—Lohan is grumpy in a colorless character role ballooned to the marquee status she enjoyed (and earned) playing Elizabeth Taylor. The Canyons is as dead-on-arrival as the picture-postcard scenes of decaying movie theater facades and concessions stands that frame the movie like ghosts of an entombed Hollywood. Some Don Draper ad man should suggest Schrader forget all that symbolism stuff and make a trailer cross-cutting Weiner and Deen, texting away on their cells, with the catch line, “Two Thumbs Up?”

Blue Jasmine. Talk about charisma. One of this critic’s most memorable theatrical experiences of a lifetime was watching Cate Blanchett play Blanche Dubois in a revival of Tennessee Williams’ 1951 A Streetcar Named Desire at the Brooklyn Academy of Music in 2009. When the brief run of the play quickly sold out, the producers sold straight-back seats with cushions on the apron for $40, which was where this writer was lucky enough to sit… three feet from Blanchett, mourning and crying and boozing and lurching her way through three mesmerizing hours. It had to be one of the great meltdown performances in the history of the American theater (directed by the incomparable Liv Ullman). And so it comes as a peculiar surprise watching Blanchett virtually reprising her Blanche role, updated to 2013, in Woody Allen’s Blue Jasmine.

Allen says he didn’t see Blanchett in the Streetcar revival, nor does he mention whether or not he consulted Williams’ playscript in fashioning his clever, nasty, and ultimately confusing homage. Here Blanchett is Jasmine, who once held sway on Park Avenue when married to a financial felon (Alec Baldwin) whose assets were seized by the government as he was swept off to prison. Jasmine, a functioning drunk without savings and lacking even basic computer skills, moves in with her working-class sister (Sally Hawkins) in San Francisco. The sister’s boyfriend (again Bobby Cannavale, again doing the motor-mouth lout he’s nearly patented on screen and stage) is a stand-in for Streetcar’s Stanley Kowalski.

The movie flashes backward and forward, giving Blanchett a wide canvass to show-and-tell a mounting disintegration. She’s the picture’s one Oscar-worthy marvel, though she’s working the identical playbook of mannerisms she used more effectively in Streetcar. Allen was once a Brearley school parent on Manhattan’s Upper East Side; he and his one-time writing partner Marshall Brickman (also a former Brearley dad) were among the keenest observers of the city’s poshest social scenes. But the residues here are bitter and exhausted. Blanchett is pursued by a rich charmer who inexplicably dumps her when he learns she was married with a grown son; by a crazy dentist who seems inspired by Steve Martin in Little Shop of Horrors; and by the annoying jerk played by Cannavale, who won’t yield an inch of the screen to anyone. This is Woody Allen in 2013, and even Cate Blanchett can barely climb over all the furniture stacked in her way.

The Patience Stone. Your patience has been rewarded. Forget these New York ladies-of-leisure and tinsel-town cuties; let them dump their cares and woes on some other audience. (You can also toss in the French misfire Our Children with its ghastly, behind-closed-doors conclusion.) Make your way to the film Atiq Rahimi has crafted from his international best-seller, for it is infused with mysticism, suspense, and universal suffering, all radiating out of one bent-but-never-broken young woman who is trying to shelter two daughters as she makes every effort to save her wounded husband’s life. What makes her journey of terror and despair through life in a Middle Eastern war zone worth watching is that it will turn into an unexpected spiritual and physical emancipation before your eyes. This is no miracle film. The Patience Stone is a triumph of storytelling and a 102-minute magic hour of cinema.

It isn’t an easy route to travel. Golshifteh Farahani is pictured above with Hamid Djavadan who plays her unnamed, older husband. He’s a Muslim soldier who’s been paralyzed with an unhealed wound in his neck and lays motionless in a coma, eyes wide open and unable to speak. She’s kept him alive for 17 days with a serum drip, running through a tube to his mouth. Their city is not named but seems to be Kabul, Afghanistan, where Rahimi shot some exterior scenes as well as in Casablanca, Morocco.

The misery index piles up fast and deep: Invading tanks blast holes through their living room wall. The neighborhood’s water bearer disappears. The woman grows desperate for money to replace the lifesaving serum. Her young daughters watch fascinated as flies buzz around their father’s open mouth. Soldiers going house-to-house steal his watch and ring. Their neighbors are shot or hung.

The woman finally finds her aunt (Hassina Burgan, wise and self-sufficient) who’s moved to a safer neighborhood and takes in the little girls. The aunt runs a stable of prostitutes and instructs the younger woman to tell any invading forces that she sells her body, which most Muslim men will avoid. And she reminds her niece of “syngué sabour,” the patience stone of Persian mythology, a form of confessional to which burdened souls can confide their fears, longings, deepest secrets, and darkest deeds.

Her husband, still mute and unmoving but breathing, becomes her patience stone. In vivid flashbacks that open up the film in steadily absorbing scenes, the woman reveals a childhood under a cruel, patriarchal father who trafficked in quails trained to fight (the Moroccan version of cockfighting, which seems to be a national pastime). And she confesses more revealing and intimate secrets of her marriage to the man whose portrait as a young man hangs on their wall directly above an ominous family dagger. “I got married to you, without you,” she murmurs to her comatose spouse.

As this narrative evolves, the woman is visited by a handsome, stammering soldier (Massi Mrowat, perfectly cast) who shyly begins giving her money in exchange for his first sexual experiences. Rahani has stated that this is the moment “that unlocks the door for her, to know herself, her soul.” With this boy who’s barely a man, she discovers a degree of intimacy she never knew in her 10-year marriage, and for the first time transforms herself with makeup. Slowly she flowers into the stunning beauty that as viewers we’d noted in Ridley Scott’s 2008 war thriller, Body of Lies, and in Asghar Farhadi’s tense 2009 family drama, About Elly. Her glamorous appearance and changed mindset precede a series of final revelations that are as dramatically startling as they are satisfying.

Rahimi collaborated on his screenplay adaptation with Jean-Claude Carrière, the extraordinary 82-year-old writer (and sometime actor) who’s worked with Bunuel, Oshima, Godard and other masters on 60 years of major films, ranging from Belle du Jour and The Tin Drum to Haneke’s The White Ribbon and the Nicole Kidman oddity, Birth. It’s probably Carrière’s contributions that have engineered the fluid and seamless transitions between past and present that serve as markers in the woman’s journey to free herself from a suffocating past. Rahimi’s cinematographer is Thierry Arbogast, an award-winning French DP (Le Femme Nikita, The Horseman on the Roof) whose sensitive lighting in tight close-ups is luminous. Max Richter’s music score is sinuous and helps ratchet up the tensions. Rahimi textures his sound in uncanny ways—buzzes of overlapped street conversations we strain to catch, sudden shell explosions that practically lift us out of our seats.

And then there are the two leads. Djavadan is given the daunting task of conveying emotion with several frozen expressions as the woman shifts his body here and there… and somehow he does this. Maybe it’s his breathing and how it’s been recorded. You get an eerie, gnawing sensation he’s listening to her and somehow processing all she’s saying. There hasn’t been a performance this nuanced, that does more with less, since Michael Murphy played Julie Christie’s Alzheimer buddy in Away From Her.

More than anything or anyone else, The Patience Stone belongs to Golshifteh Farahani, whose name is probably too long for your nabe’s multiplex marquee. But in this film she’s giving you worlds more than Cate, Amanda, or Lindsay. This 31-year-old Iranian actress, whose films are banned in Iran, has that quality of charisma as defined by Paul Schrader. The difference between the falling-apart woman Farahani portrays from the women acted by Blanchett, Seyfried, and Lohan is that Farahani’s character has absolutely, positively earned the right to prevail… and in the last moments, it seems in a strange way we never would have guessed, she may. This is what patience is all about, in life and sometimes even in the movies.

The Patience Stone is scheduled August 14-27 at The Film Forum in Manhattan.