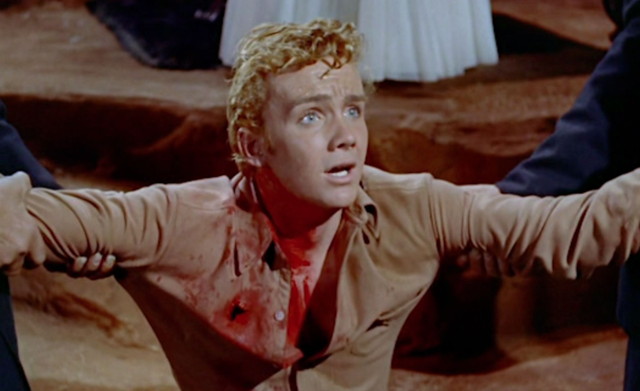 One of a million stills in "Red Hollywood" a documentary of the too-little seen films that fell sway to the Red Scare.

With Russian President Vladimir Putin’s annexation of Crimea and deepening incursions into Ukraine, US relations with the Kremlin have taken on an ominous chill. Not that Congress is likely to fall into the anti-communist hysteria of the 1950s, when Senator Joseph McCarthy’s efforts succeeded in blacklisting major Hollywood directors, screenwriters, and other fellow workers who were communists, communist party sympathizers, or far-reaching leftists who reached too far for reactionary politicians.

But the re-issue of Thom Andersen, Noël Burch’s unprecedented compilation of 53 clips from 30s, 40s, and 50s Hollywood films—many rarely seen and nearly all prescient in their views of class, patriotism, business, and morality—is cause for celebration. If you’re in New York August 15-21, 2014, seize the opportunity to see Red Hollywood on a big screen with a live audience; and if you’re reading this online anywhere else, simply click here—the original 119-minute doc has been uploaded onto YouTube, humankind’s universal viewing platform. Even watching this encompassing doc on a small home screen (assuming it hasn’t been taken down), your patience will be richly rewarded.

Red Hollywood establishes its premise with a vivid clip from Nicholas Ray’s Johnny Guitar (1954), at the moment when Ward Bond advises a frightened young Ben Cooper who’s facing execution, to “tell the truth, that’s all we want. Just tell us she was one of you, and you’ll go free.” “What’ll I do?” cries the boy—“I don’t want to die!” “Save yourself,” murmurs Joan Crawford, another accused. “What’ll you do to her?” anguishes the boy. “The law will take its course,” smirks an evil Mercedes McCambridge. The boy drops his head in shame, nodding.

That’s the drill. There are differing accounts on whether this defining cinematic metaphor was devised by Philip Yordan, the credited screenwriter, or by the versatile Ben Maddow, uncredited, or by Ray himself, also a partial collaborator. (The setup in Johnny Guitar is very similar to another 1954 western not included in the compilation, Silver Lode, in which John Payne’s wedding to Lizabeth Scott is interrupted by the arrival of Marshal McCarty (Dan Duryea’s shadow reference to Senator McCarthy) who claims Payne murdered his brother).

The premise of both these westerns sets the agenda for Red Hollywood’s seven chapter exploration—Myths, War, Class, Sexes, Hate, Crime, Death. Some of these movie scenes are muted, muffled pleas for understanding; other clips are warnings not to crush lawful and democratic dissent; still others reflect the perils of unchecked capitalistic greed; and a few astounding scenes reveal important screen explorations on human rights violations, which American theater owners were discouraged by major studios from even showing. Here are some highlights:

Several of the final clips grimly reflect fears and frustrations before and after the blacklist: On the Waterfront (1954, directed by Elia Kazan and adapted by Budd Schulberg from his own novel), stands among the most debated films of the 20th century. It’s recognized (both pro and con) as Kazan’s bitter response to those who attacked him for naming names before HUAC. Marlon Brando is the dockworker whose brother (Rod Steiger) is murdered by Lee J. Cobb’s waterfront mob and finds himself nearly beaten senseless by Cobb’s thugs. But the rank-and-file won’t go back to work unless Brando, the battered ex-prizefighter, leads them in and so, bloodied but standing, he does.

He Ran All The Way (1951, screenplay by Trumbo, credited to Guy Endore and Hugo Butler, from Sam Ross’
novel) was Garfield’s last film. Like The Asphalt Jungle, it’s another heist that falls apart, and Garfield takes a family hostage (Shelley Winters is the daughter and bakery girl)…but he’s shot and dies fleeing down a rain-soaked street. The 1947 drama Body and Soul also starred Canada Lee with Garfield; Lee played a black prizefighter who dies in the ring. The actor, who like Garfield was caught in the blacklist, died within two weeks of Garfield at the age of 45.

Tell Them Willie Boy Is Here (1969, written and directed by Polonsky), is the writer/director’s post-blacklist triumph, a drama of a Paiute outlaw (Robert Blake) who’s wanted for murder and pursued by a sheriff (Robert Redford) who shoots him without realizing the Paiute’s gun wasn’t loaded. “They’ll all know I was here,” says Willie Boy, summing up Polonsky’s own credo.

The cumulative takeaway of two hours of these clips suggests that far from advocating an alternative political life, most of “Red Hollywood’s” writers and directors were trying in sporadic and sometimes awkward ways to address societal wrongs and injustices. For the most part they championed underdogs, as did many studio films of the 30s, 40s and 50s. They inserted indie-style scenes—sometimes only a line or two, a suggested action, a fleeting look—into the most conventional mass-market product. They were independent film artists before there were independent films. Chances are Vladimir Putin wouldn’t understand what they were doing any more than Hollywood’s studio czars did at mid century. But in incremental ways they began to change how movies were perceived as a mass medium that could inform and educate, as well as entertain. If you watch Red Hollywood carefully, you’ll know and remember they were there.

Editor’s Note: Screenwriting credits are included more frequently because there were more communist screenwriters than directors. A lot of the films included in Red Hollywood were written by the four screenwriters who are talking heads throughout the doc. Most directors of those same films had nothing to do with the movement.

Red Hollywood screened as part of the Film Society of Lincoln Center’s Art of the Real series on April 12-13, 2014 at the Elinor Bunin Monroe Film Center.