Get your film made in a weekend by taking part in one of these short film competitions or challenges. 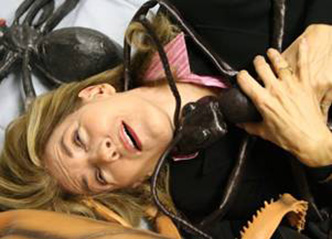 Fun from one of the most well-known film challenges, the 48 Hour Film Project.

Whether you are new to filmmaking or have been at it for a while, making the commitment to produce a film can be a challenging undertaking. Coming up with an idea, writing a script, finding your subjects, coming up with the finances, and finding a good crew are just a few factors that can get in the way. If you’ve worked in filmmaking but have not produced your own work for quite some time, you may be looking to jumpstart your creativity, especially when you know there are tons of stories to be told. Sometimes we lack the structure that a formal school setting provides, or we get lost in our day to jobs that do not necessarily offer the creative outlet that filmmaking provides. Meant to inspire and emphasize creativity, there are several short filmmaking competitions around the world that aid in curing the creative blues.

Short film competitions take place year round and are open to all levels of filmmaking. Each competition has a specific set of rules/guidelines. What makes short film competitions unique is that they very often enforce a time limit to produce the film (ranging from 48 hours to 10 days). As the 48 Hour Film Project puts it, “While the time limit places an unusual restriction on the filmmakers, it is also liberating by putting an emphasis on ‘doing’ instead of ‘talking.’” Filmmakers may also be given specific themes or genres. Depending on the competition, on day one, they are assigned a character, a prop, a line of dialogue. The top films are often eligible for cash prizes and have the opportunity to screen at a major festival such as Cannes International Film Festival or Sundance Film Festival.

The Independent has compiled the below list, organized starting in January and running through the end of the year, to help you rejuvenate your inner, creative-filmmaker self. The list offers a mixture of fee and no fee based short filmmaking competitions from all over the world. So get a bunch of friends together or go out on your own and meet new friends.

10 Day Film Challenge: Founded by educators in 2011, the 10 Day Film Challenge began as a competition among three high schools in Southern New Jersey and has expanded into a multi-state film competition. In 10 school days students make a movie—write, shoot, edit and score it—during their film class periods only! On day one of the Challenge students receive their character, prop, a line of dialogue, a cinematic techniquem and a genre that must be included in their movie. The best films, depending upon the participants’ state, will be shown at a local theater or online as part of an awards ceremony.

The International Doc Challenge: The first of its kind, The International Doc Challenge is a timed filmmaking competition where participants have five days to produce a short non-fiction film no longer than seven minutes in length. In addition to the five-day restriction, filmmakers have to choose between two assigned documentary genres (like Biography, Music, 1st Person, etc.) and are assigned a specific theme (such as “Freedom”) that will dictate the outcome of their film. Top films premiere at the Hot Docs Canadian International Documentary Film Festival in Toronto where the winners are announced. After the premiere, there are additional theatrical screenings in major cities and possible television exposure.

Deadline to enter: February
Fee: $99-$195, depending on when you register
Location: Missoula, MT (open to all)
http://www.docchallenge.com

iPhone Film Festival: Founded in 2010, the iPhone Film Festival was started by filmmakers for filmmakers. As the name suggests, the festival was designed to give filmmakers the challenge of producing a film without fancy equipment but instead with their iPhones. However, there is a bit more flexibility stated in the rules, “70 percent of the film must be shot with an original iPhone, iPad and iPad Mini or any other Mobile device, (e.g. Samsung Galaxy, Nokia, HTC, etc.) to be eligible to win.” There is no time requirement, though film’s shorter than three minutes will be classified as a short film, film’s longer than three minutes will be deemed as a feature.

Deadline to enter: February
Fee: $0
Location: unknown (open to all)

The Youth Film Project: In its eighth year based out of Portland, OR, the Youth Film Project allows school age and high school students to show off their creativity, knowledge, and skills by producing a short film on civics issues. Films cannot be more than five minutes in length. Top films have the opportunity to win prizes.

Boston Jewish Film Festival: Short Film Competition: Every year the Boston Jewish Film Festival selects 7-10 short films, no more than 30 minutes each with Jewish themes from around the world. The films are screened during the larger film festival, which takes place in November. Films selected for cash prizes are determined by audience votes via text on the night of the event. The 1st place winner takes home $1,500 and the 2nd place winner takes home $1,000. Eligible films must be produced after a certain date and cannot have screened in Massachusetts by November of the screening year.

Deadline to enter: May
Fee: $25-$40, depending on when you register
Location: Boston, MA (open to all)
http://www.bjff.org

Toronto Smartphone Film Festival: Founded in 2012, the Toronto Smartphone Film Festival is the only smartphone competition in Canada. The festival provides an international platform for aspiring filmmakers to tap into their creativity to tell a story using smartphone devices, tablet PCs, and pads of any brands. Films can be no longer than 10 minutes in length and can explore any genre of choice, including but not limited to animation, comedy, horror, music video, documentary, and experimental.

Deadline to enter: May
Fee: $0
Location: Toronto, ON (open to all)
http://www.smartphonefilm.ca/

Sundance Institute Short Film Challenge on Tongal.com: Relatively new, Sundance Film Institute in partnership with the Bill and Melinda Gates Foundation is sponsoring a short film challenge. The competition asks filmmakers to produce a film that explores an empowering person or an optimistic story about individuals and communities who are overcoming poverty and hunger, combating disease, or improving health. The short film can be narrative fiction or documentary and between three and eight minutes in length. The top five films will be invited to screen at the 2015 Sundance Film Festival and will each receive $10,000 each.

3 Day Film Challenge: The 3 Day Film Challenge is open to filmmakers throughout the Bay Area. Filmmaking teams have three days to write, cast, shoot and edit a film. All films must be a minimum of three minutes and not exceed five minutes in length. The films then screen as part of the San Jose International Short Film Festival.

Deadline to enter: October
Fee: $175-$225, depending on when you register
Location: San Jose, CA (open to Bay Area filmmakers)
http://www.sjsff.com/3-day-film-challenge.html

Art with Impact: Each month, this San Francisco-based organization runs a monthly short film contest on mental health. Five minutes or less in length, films can be of any genre, using mental health as the focus of interest. There is no fee to participate.

Tongal: Tongal is a website that sponsors various video challenges. It gives creative people (thinkers, writers, directors) the opportunity to do their best work by connecting them with brands, causes, and people who need their best work. Brands that have worked with Tongal include, Oral B, Lego, and Virgin.

The 48 Hour Film Project (48HFP): From North America to Africa, this festival/competition is one of the most widely attended. As the name suggests, filmmakers literally have 48 hours to write, shoot, edit and score a short film. Now in its 13th year, the 48HFP will visit more than 120 cities where more than 60,000 people will make short films. A dozen of the top films are screened at Cannes Film Festival.

Deadline to enter: Varies
Fee: $140-$175, depending on when you register
Location: Various cities around the world (open to filmmakers in the city that the competition is taking place in)
http://www.48hourfilm.com

Did we miss your challenge? Email us with a profile formatted like the above entries at info AT independent-magazine DOT org.