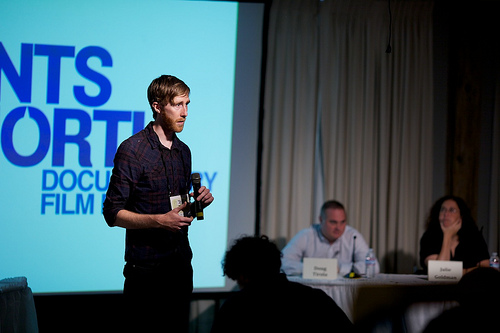 Sean Flynn hosts a past Points North Forum at CIFF.

Now entering their 10th year—and with a lot to show for that decade—the growing Camden International Film Festival (CIFF) launches the Points North Fellowship. New this year, the fellowship provides a fully-funded package for filmmakers to participate in the two-day Points North Documentary Film Forum. The forum includes Points North Pitch, and is part of the all-documentary festival, which will take place in Camden, Maine from September 25-28, 2014. Submissions for Points North Fellowship will be open until July 25, 2014. Five applicants will be selected.

At the Points North Pitch, which began in 2010, the five selected filmmakers will present their documentaries-in-progress to a panel of film industry experts, including funders, commissioning editors, and producers, before a live audience. Their goal is win the Points North Pitch Award—a $1,000 cash prize from Documentary Educational Resources, three consultations with the Tribeca Film Institute, and a post-production package from Modulus Studios. But all will have the opportunity to promote their film, network among an international delegation of doc filmmakers, and ultimately, and ideally, find partners in their cause.

The Independent spoke with Sean Flynn, the director of Points North Forum, via Google Hangouts while he was working up in Maine.

Maddy Kadish: What prompted the CIFF to start the fellowship?

Sean Flynn: It’s really a natural outgrowth of the pitch session. The level of the projects each year has been incredible—both the quantity and quality have gone up exponentially every year. The pitch session is a platform to connect emerging filmmakers with the community. It builds your confidence as a filmmaker and gets your feet planted. We wanted to build the pitch session into a more robust scholarship program.

We built the fellowship into the budget for the festival. Investing in the next generation of filmmakers is a key part of the mission of the organization and we made a case to our board.

Flynn: This year there’s a full day of training and mentorship, with the panelists, prior to the festival. Following the festival, we have funding for fellows to attend the Cinema Eye awards (in January 2015) in New York City to reconnect with the industry people from the pitch table. CIFF has been involved with Cinema Eye for a few years now.

MK: Tell me about some of the Points North Pitch alums.

Flynn: We have seen some successes—sometimes down the line. The Sensatives won the 2013 Points North Pitch. Then received a 2014 Tribeca Film Institute Documentary Fund Grant. In Country, the pitch winner in 2012, is getting out into the festival circuit and played at Full Frame and HotDocs this year. [The team was also selected as one of The Independent’s 10 Filmmakers to Watch in 2014.]

MK: When do you recommend that filmmakers get their applications in?

Flynn: As soon as possible! Generally, the numbers are stable and about three days before the deadline, they jump!

MK: What is the selection committee looking for in fellowship applicants?

Flynn: We get a wide range of experience level, subject matter, and stage of production—pre-pro and rough cut. We look for films that are very visual, can play well on the big screen, and have strong characters. We also look at the passion of the filmmaker. Sometimes we help filmmakers who may not have received support elsewhere. But other times we go with more established filmmakers. It’s exciting to cover new filmmakers—like we did with Mike Attie and the In Country team. We hope Points North is a lauching pad for a new generation of filmmakers to be discovered.

The application deadline for the Points North Fellowship is July 25th. To apply, go to the CIFF website http://camdenfilmfest.org/pointsnorth.