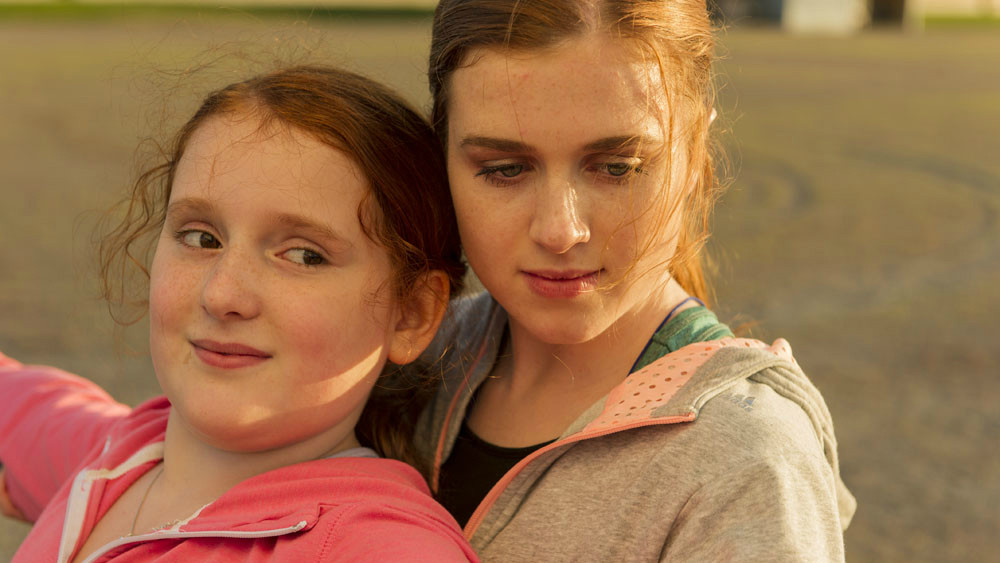 Two years ago Sanna Lenken took part in the Berlinale with the remarkable short Eating Lunch in which she also explored the topic of young people with eating disorders. My Skinny Sister (Min Lilla Syster) marks her first feature-length drama and was awarded the Crystal Bear for the Best Film in the Generation Kplus Competition of Berlinale 2015.

Stella is in love with, of all people, someone almost four times her age and has no idea how to tell him. But her older sister Katja’s problem weighs far heavier on her mind. Katja is a talented figure skater and is always busy with school or training. At home she receives almost all of her parents’ attention. Stella barely gets a look in. Stella admires her sister and tries hard to emulate her. The two girls get on well as a rule, but Katja hardly has any time and can sometimes be unexpectedly distant and mean. Stella is the first to realize that something is wrong with her sister and discovers that she is suffering from a severe eating disorder that could kill her. Stella wants to tell their parents but Katja forces her to swear not to. That is far too big a burden of responsibility for a girl of her age. This powerful film describes how Katja’s illness slowly drives the family to the brink of despair.

Dana Knight: This is a very sweet and heart-warming film, what sparked the idea for it?

Sanna Lenken: I had an eating disorder myself as a teenager and when I got healthy as an adult I was thinking: why do so many women get this disease or have some sort of problem with their self-image? I started digging into this subject and I started writing a script with a sick person as the main character. But then I spoke to my little sister and asked her what she felt when I was sick. And she said she was so afraid that I would die. And I thought that was so terrible, the things I put her through, she was only 12 years old. And I decided to change the main character because this naive view that she had is more powerful and a bit more universal. It’s so strange, this sickness, but so many people have it. So I thought it was a good idea to have the younger sister as the main character because I could have some humour through her eyes. Not make it completely dark.

DK: You’re a writer-director and this is your first feature, how difficult was it to get it off the ground?

Lenken: The writing phase was horrible, I don’t like to be lonely, I get depressed. I had to force myself to write. And I feel I’m more of a director, actually, because I love the cooperation you have with actors, the DOP and the producer, I like to be connected to people. And writing is so different, you’re alone in a room… But it was good for me. It took some time though, I had the idea six years ago. During this time I did short films, mini TV series in between. Then we started financing the film two years ago, here at Berlinale actually.  I made a short film about the same subject and it screened here at Berlinale. Then we had the first meeting with some German co-producers and they were very interested.

DK: The topic is very relevant, there aren’t many feature films about this subject.

Lenken: Maybe documentaries but not many feature films, no. And it’s also about becoming a woman and about the relationship between two sisters. Which was very interesting for me because I have a little sister myself. She hasn’t seen the film yet, she’s scared to, I think. She thinks it’s me and her but it’s not actually, it’s very much me in both characters. But she might recognize some arguments we had.

DK: It’s interesting how writing blends fantasy with real life. Talking about writing, how many drafts did you go through?

Lenken: I don’t know, many, many, many. I worked on it for six years almost. I was fighting a lot with myself trying to decide how to tell the story. And when I changed the main character, there were a lot of discussions about her aim in life, I didn’t want her to be just a girl looking. She had to drive herself but I didn’t want her to be unrealistic. Some people were saying, “She has to have an aim.” And I was thinking, this is going to be a Hollywood thing! And I was interested in something more realistic.

DK: But the fact that she’s looking is not a passive thing, she’s actively looking, she owns the looks. Traditionally, the woman is the object of the look, of the male gaze, but in this film you have a young girl looking at her older sister and the dynamics of the look are completely different.

Lenken: I’m happy you said that. I was actually thinking of calling the film Girls Looking or The Way A Girl Looks. Not in English, in Swedish. But then we changed it to My Skinny Sister.

DK: The performances are remarkable. Who are your main actresses?

Lenken: It was my casting director who found both girls. Amy, the older sister, is famous in Sweden, she’s a pop singer, her artist name is Amy Diamond. Because of that, at the beginning I said no. And my casting director told me she applied. And I kept saying no, I’m not interested.

Lenken: Because she’s all smiles and this part is so heavy, has so much angst, and I don’t see her doing it. And my casting director was pushing me to try because she thought she had something. Then she sent me a casting tape and I go: “Is this the same girl?” She was making a crazy scene, she was crying, I didn’t even recognize her. And then I chose her, she was totally the best, she was amazing. And then it took us a year to find the little girl.

DK: What qualities were you looking for in her?

Lenken: I was looking for a strong little woman. A strong girl with integrity. Even if she’s sometimes vulnerable, I felt she had to have a strong side to her. And I wanted her to look special so that I’m really drawn to her. I think Rebecca has almost like a painterly quality to her face, I was always thinking of certain artworks in association with her appearance, it’s so serene.

DK: She has a warming quality, you warm up to her very quickly. And you soon realize she’s the main character actually, she’s very much driving the story.

Lenken: Yes, definitely, that’s why I was looking for someone who seemed strong enough to do that. And as a little person, she’s totally amazing. She had to do some really difficult scenes and I asked her, “Are you sad?” And she said: “Sometimes I can be sad but it’s nothing dangerous. But sometimes you have to cry.”

DK: Was the budget flexible enough?

Lenken: Yes, we had no problems with that. I’ve been working with my producer Annika Rogell a lot. Then we found a co-producer, Ilona Schultz, from Hamburg. They’ve been very supportive. Actually everyone in this team put in so much love, even if it’s a heavy film in a way.

DK: Which other film festival is the film travelling to after Berlinale?