Dana Knight interviews Agnès Varda en francais and translates to anglais to coincide with the US release of digitally restored prints. 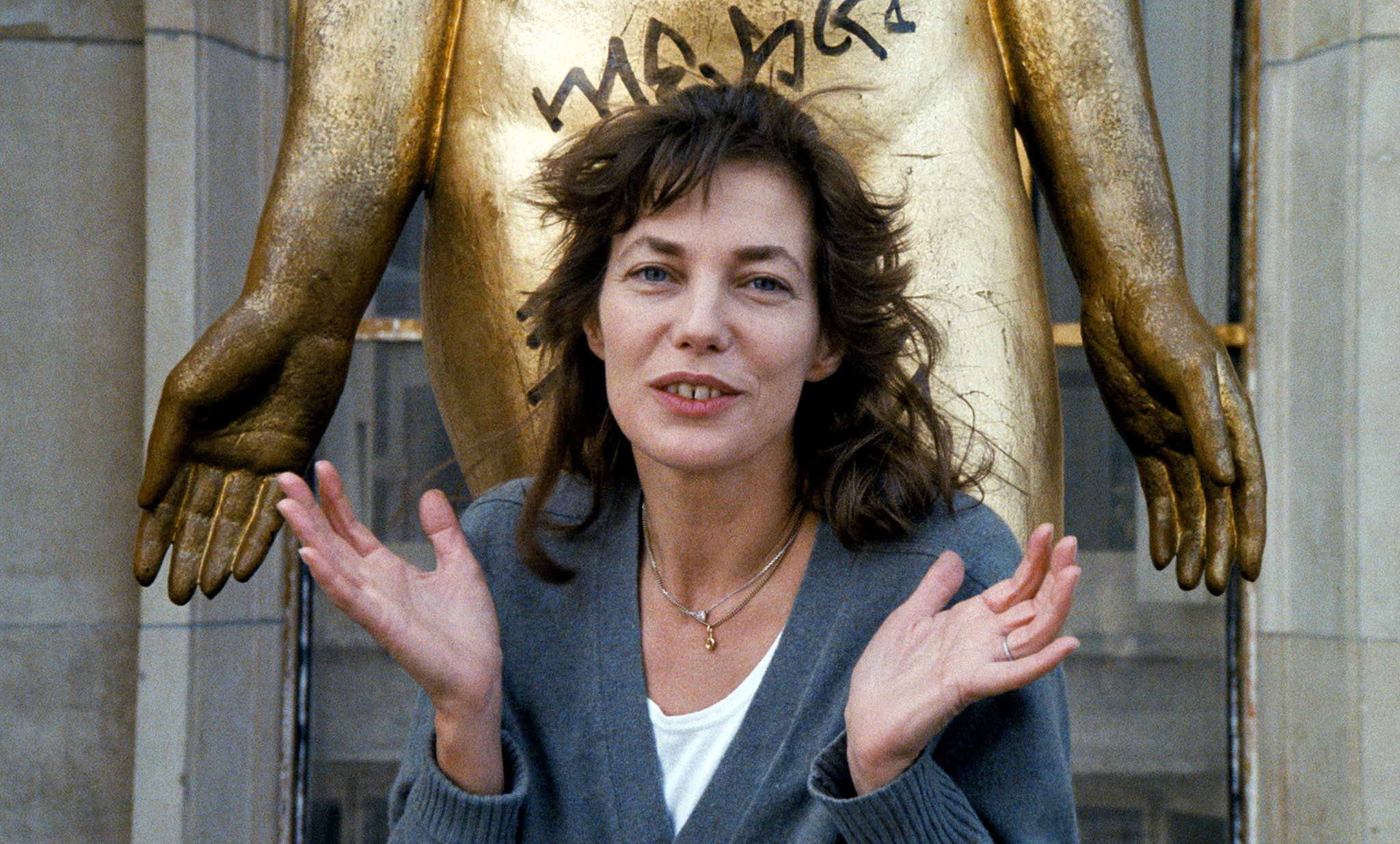 Digital restorations of Agnès Varda’s Jane B. by Agnès V. and Kung-Fu Master! will screen at LA’s Laemmle Royal starting November 13, 2015. The following interview took place over the phone on October 14, 2015 in French and has been translated into English by Dana Knight.

Knight: In Jane B par Agnes V, you created a fascinating array of roles for Jane Birkin to play. The film struck me as very multi-faceted, a very luxurious portrait. Do you like me using the term luxurious in relation to the film?

Knight: There are many surprising sequences in the film. I really wasn’t expecting the Laurel and Hardy scene in which Jane is impersonating Laurel. And I guess it was you playing Hardy?

Varda: No, it wasn’t me! Maybe we look alike but it wasn’t me in the scene. Jane plays Laurel but it’s not me playing Hardy, it’s this extraordinary Italian actress, Laura Betti. It’s a nice idea that I played the couple but no, it’s an actress who played in Pasolini films. It’s also her in the bakery scene where she laughs at Jane who is painting a white painting. That was a scandal in contemporary art at the time.

Knight: And it is also her in the scene about unemployed people?

Varda: Yes, that’s her also. In all my films, even in comedies, I’m trying to bring in contemporary subjects. At the time, there was a problem with unemployed people, and also the scandal about white paintings. I’m obviously having fun and keeping a light tone because it’s a comedy, but there are truthful bits, there’s a certain sensibility.

Knight: Going back to the surprising scene with Laurel and Hardy, which became Morel and Lardy in your film, Jane says that she was not comfortable in the role. Since it was you that created that role for her, did you expect her to have this reaction, did that surprise you?

Knight: You’re using many art works in this film and placing Jane within the realm evoked by them. What made you choose those specific art works?

Varda: We were in the studio of a painter, he let us have his studio to shoot in. So it was another opportunity to talk about painting, to talk about Salvador Dali. Every scene of Jane B is an opportunity for her to do a different role that she would never do in cinema. Especially Jeanne d’Arc. But what was also interesting is that we also invented a lot of characters. And actually the idea for Kung-Fu Master! came to us while we were shooting Jane B. Jane wanted, all of a sudden, to do this other story, where she is in love with a teenager. But if we had told the story in its length, it would have broken the rhythm of Jane B. So we decided to make a separate film, Kung-Fu Master! When the film was originally released in the US in 1988 or 1989 it was called Le Petit Amour (The Little Love) and a lot of critics saw it, Jonathan Rosenbaum among others, they are old now.

Varda: Very well, but it’s a shocking film. The critics were a bit shocked, it’s a delicate subject.

Knight: Yes, it’s a very daring film, even for contemporary audiences, I would say.

Varda: With this film, I was trying to understand teenagers. There is a scene at the beginning with Jane in front of a window and you can even see me for a few seconds. I always ask myself the same question about teenagers and their interior world. They are fragile. But I can’t imagine this story happening now because with the Internet, and porn films and the wide availability of pornographic materials, teenagers today are not in the same situation as teenagers were 35 years ago. It was the first time we were talking about AIDS in France. So until then we were telling teenagers, “love is beautiful, make love” and in 1987 we suddenly started telling them “be careful, love is dangerous.” This made a big difference in the lives of teenagers.

Knight: Yes but I’m not sure the teenager in this film is so fragile. I’m thinking of the last scene now, he comes across very cynical.

Varda: He is cruel, yes. Both of these traits exist in him. He’s fragile because of things he does not understand very well, and he’s cruel because he feels suffocated by love. The film is cruel towards Jane’s character because, although a grown-up woman, she is a teenager at heart. That’s why the story is sad, she is rejected by society as if she were a bad person. But she is not a bad person obviously. It’s an interesting film and now that we are talking about it, and maybe other people will see it and talk about it, I’m also a bit sad because of distribution issues, my two films come out at Lincoln Plaza for one week and that’s it. People can see one film one night and the other film the following night. That is very cruel because people don’t decide very fast what film to see. Also for the press, you only have a few days to tell people what films to see, that’s a little cruel too, don’t you think?

Knight: Yes it is, we need to be very alert to what films are being released every week and time our reviews and interviews to correspond with that. Since we’re on the subject of distribution, you say that your films have a small audience because they are small art house films. But this is also a matter of marketing in which the gatekeepers of the industry are very much involved.

Varda: I am lucky to be very well known by cinephiles, very well known and loved by students in every country, I have a little reputation, a lot of people love my films but I don’t know if they are commercial. That’s why I always say, I don’t have a career, I just made films. I am marginal and I am happy to be marginal because I’m very well known in these marginal circles of cinephiles.

Knight: Yes but what I’m saying is that it’s a pity that the larger public doesn’t have access to your films. And access is decided by the gatekeepers of the industry. If they were more daring and willing to take risks, they might have the nice surprise to realize that the larger public would also enjoy your films. Your films are not inaccessible, esoteric, they are very sincere, intimate films.

Varda: Yes, but it’s a matter of distributors, exhibitors, and ultimately it’s a matter of money. They all want to make money and that’s why they decide not to screen a film too many times, they want new films all the time. I can’t discuss the system, it is how it is. But I am lucky to have my films shown in public institutions. In April this year, The Film Society of Lincoln Center in New York organized a retrospective of my films titled The Actualities of Agnès Varda as part of their Art of the Real programme. Now, the University of Chicago, where I am right now, at the Logan Center, they showed all my films during 15 days. It’s part of a beautiful exhibition that includes all my photographic work, videos and installations as well. It’s something that gives me a lot of pleasure, the exhibition is spread over three big rooms in a big gallery at Logan Center and it gives the opportunity to people of Chicago to see my work. And there are a lot of people at the screenings, the films are playing several times not just twice and that’s it.

Knight: Talking about the entirety of your work, one of its recurring themes is female psychology, the feminine subjectivity. You conveyed this so well in cinema and also at a time when portraits of women were not very complex. What was the inspiration for that?

Varda: Maybe I understand women better than men do. But I also did portraits of men, of children. Maybe you saw One Hundred and One Nights, The Creatures. In these I spoke a lot about men, also in Beaches of Agnes. I don’t have the impression that I focused exclusively on women. But it’s true that probably the most well-known portraits that I created are those of women: Cleo, Mona in Vagabond, Jane B. These are very precise portraits of women, and also very warm portraits. Even Mona who is so angry, I like her a lot, she interests me a lot.

Knight: Are you excited to show the restored versions of Jane B and Kung-Fu Master! in US this fall?

Varda: Yes but I would have liked these films to be shown during two months, to give the possibility to the people of New York to see it. But the reality of distribution is: both films are playing for one week. And I can’t change the world of distribution. I can change my relationship with the public. For instance, everyone talks to me about The Gleaners and I, all kinds of people. Yesterday at the market there was a cheese merchant who recognized me in the street and told me how much he liked The Gleaners. This means that when people see my films, they understand very well, it’s not a difficult cinema but as you said the problem is access, it’s distribution. But I can’t force cinemas to show my films for longer or show them everywhere. I have to accept that. And I’m glad that so many people write to me, love my films, buy the DVDs. Criterion put out a collection of my Californian films. But I can’t compete with the films they are showing in cinemas now, I’m old enough to be wise, I just go on and make other films.

Knight: By the way, what are you working on right now?

Varda: Right now I’m working on a documentary about the artist J.R. He is a very famous artist and we’re working together on a documentary in France. It will probably be ready next spring. We meet and work for one week every month, because we both travel a lot. And I’m taking my time, I’m not pressured by distributors if you see what I mean, people like my films but no one pays me to do it faster! I will also have an exhibition of my visual art at Centre Pompidou in Paris soon. But now I’m enjoying my time in Chicago.

Knight: You’re not coming to New York this time?

Varda: No, I only passed through New York on my way to Chicago but very fast. I must return to France as I have a lot of work there. But when you come to Paris and you should call me. It won’t be this number, but if you open the page Cine Tamaris, you’ll find me there, it’s my production company and I have a few people working on my films.

Knight: Yes, I know where it is, I found it by coincidence three years ago when I was in Paris.The outside display was so fanciful, I thought it’s a vintage shop so I went in. And one of your assistants welcomed me and told me that you live nearby and I should go and visit you. I was so surprised! But I did not want to disturb you.

Varda: Actually, there are a lot of people who come into my editing room because it’s at street level. They come in, they say “Hello.” I tell them, “Please sit down.” And they are total strangers, Australian, Portuguese, it’s very amusing!

One Response to “Agnès Varda Reflects on “Jane B. by Agnès V.” and “Kung-Fu Master!””