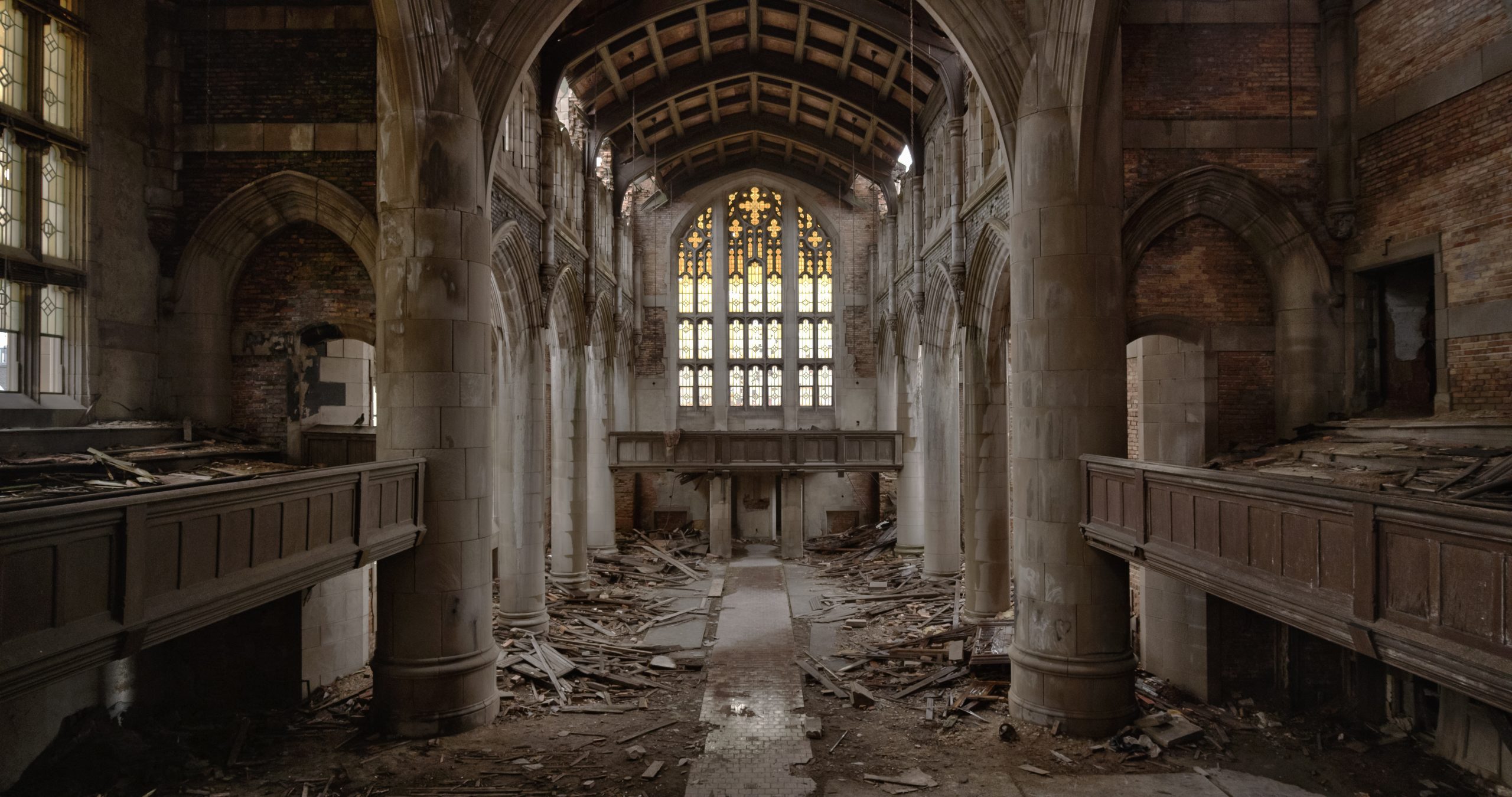 European documentarian Nikolaus Geyrhalter (Our Daily Bread, Abendland, Over the Years) returned to the Berlinale Forum this year with Homo Sapiens, a photographic contemplation of what human impact on the planet might look like after we are gone and nature has reclaimed the debris.

Courtney Sheehan: You’ve talked about how the vision for this film is more fiction than documentary in a way. What are the origins of the idea and at what point did you discover that you would need to manipulate the physical locations and the sound?

Nikolaus Geyrhalter: After the shooting when we tried to start editing with the original sound, we very soon understood if we wanted to create a film that should also be readable as a vision without humans anymore then sound would be important. it needed to concentrate on the nature and how the nature claims back everything. It was very important to hear the wind and the water and to make it a very three dimensional experience in the cinema. The focus should be on the natural elements, not the humans anymore. And from that point on we decided to work toward this film. It doesn’t mean we really manipulated any images. All the locations in the film exist in the present. Since it is a film and not a photobook, movement was important. Wind was important, for example. Often we had the experience that when we enter a room, the wind blows in, and this was very magical. In other locations we had to use artificial light, not to make it look artificial but just to be able to technically film what we cannot see without our bare eyes, like in the cave.

CS: The film is simultaneously engaging with the past, the present, and evoking a sort of future as well. I’m curious about that sense of temporality and how that shaped the film’s development?

Geyrhalter: This became clear very soon I would say. We needed to create those images that could be shots from the future without humans anymore, but then again they must still have their credibility as images here in the present. And then when we were editing the film – for those who don’t want to think, it’s a film about the world without people. It’s very simple and you can enjoy it. But what we really intended was to tell stories between the lines. To make people think about human beings in the present. What they do, how they live, what they leave. This was the two story lines we were trying to follow, both must be possible.

CS: The balance is interesting, too. It’s both a critical look backward but also not passing overt judgment. In terms of the creative process was that a challenge?

Geyrhalter: There was some judgment in some way by the choice of the locations. By the facts we wanted to stress in our narration. None of the locations were there just for fun, they should all tell something for those who want to read between the lines, so there is some criticism of mankind. But besides that it’s true, the audience is very much invited to basically see their own film.

CS: That’s true for the locations as well because you shot in many countries but it’s not explicitly made clear where any scene takes place. Abendland similarly roams across multiple countries. What is the role of the nation-state as an idea in the kinds of themes that you’re exploring?

Geyrhalter: The nations are there. Some of the locations are obvious, like Fukushima is obvious. We didn’t want to hide them, we just didn’t want to stress them for a very simple reason – because during the first part of the film it’s really more about creating locations. For example, the slaughterhouses. It was very important for me to have a slaughterhouse in the film because it was an important statement. But we couldn’t find one ideal slaughterhouse. So this was put together from material we shot in Italy and material we shot in Denmark and material we shot in Poland. So it would be impossible in this sequence to put information about where it was shot. We did this many times. It was really a more narrative approach. And then on the other hand there is a strong chapter about the war. It is all there but it is not narrowed down to where it was shot.

CS: The comments on the post-human future also make me think about post-nation-state. What happens when the systems fall apart?

Geyrhalter: But there will always be new systems, that’s what I’m afraid of.

CS: Did any other films influence Homo Sapiens?

Geyrhalter: Especially with this film, no. There was some photography influence, but not from other films. But if you talk about influence, there’s this book by Alan Weisman, The World Without Us. I read it and liked it. It was a kind of inspiration. And actually I was talking to him once on the phone.

CS: In the editing process in terms of ordering sequences, the sound design is very layered and complex – did those processes emerge simultaneously or was it more about ordering the sequences, then coming back and working on sound?

Geyrhalter: It was a mixture. We were shooting and editing at the same time, always in steps. With every period of editing we were missing more exact details. The experience of editing changed the way of filming. Also the sound – we didn’t record sound on location most of the time. Whenever Peter Kutin and Florian Kindlinger [the sound designers] finished some sound work on the imagery, it changed the image and it’s placement in the film. 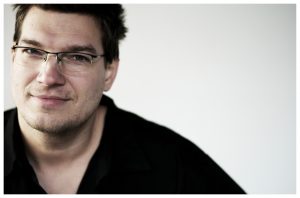 CS: Is that similar to how you typically work?

Geyrhalter: Not at all. Usually I do record the sound because I really want the original sound. This is more like a painting, it’s still somewhat a documentary but it’s different.

CS: The editor and sound designers were very key for this film. Were there other very key crew members that shaped the process?

Geyrhalter: Location research. Really the film wouldn’t exist without the locations and where they are and how they are accessible and who are the owners. Maybe this was the greatest challenge, to find the locations on the internet but then to find out where they really are, are they accessible, do they still exist.

Sometimes locations were just demolished or in the process of being demolished. Sometimes we were filming while they were demolishing a building on the other end. So sometimes we came in time and sometimes we missed it. Some places changed. There are beautiful images on the internet, then you go there and they’re completely trashed and you can’t use them anymore. So this kind of research was probably the most complicated.

CS: The point in the trajectory of the changing world that your film enters is after that moment that humans are gone. How do you capture that stage?

Geyrhalter: Actually it is somewhat the stage before the others would come. It’s a reality but not a storyline. We altered the images but always in a way that we felt was ok. We could have found them if we’d come there earlier. So it’s not a big lie to take graffiti out. We had to remove some footprints. There was one image that I was reading about and we couldn’t find it because it wasn’t existing anymore, the server room. Then we had the opportunity to find an old server room and put the water in there. This was something that I just wanted to do because it was very important for myself to have technology in the room.

CS: What do you think about the idea of dystopia? There is this entire canon of images, art and literature that imagines the dystopic sci-fi future. Do you feel connected to that canon?

Geyrhalter: This is the documentary answer to it. All of this literature or these films create the rooms without the people. But we really filmed them in the present. This is what’s different, and this is why it’s still more documentary than anything else. The locations exist and we could film them. You could say it’s happening already.

CS: How much is there intentional environmental commentary?

Geyrhalter: I feel it is there very strongly.

CS: Were there any topics you didn’t get to film because the locations couldn’t be found or had disappeared?

Geyrhalter: Many, many. One was an abandoned space station in Afghanistan, but we couldn’t get permission to film.

CS: I imagine when it comes to thinking about finding those locations and the different topics it could be really endless. How did you create a narrower focus?

Geyrhalter: There are so many places, you’re right. You can find millions. But if you want to do something for the cinema it must be outstanding. We had to find the best locations and we had to try to make images that were at least as good as the best photographs existing. That’s my personal approach. Because otherwise why should people want to go to the cinema? And also within the film, the visual level is quite high from the beginning. The film had to become stronger with every topic or at least not weaker. We had to choose the strongest locations and images to create this tense atmosphere in the cinema.

CS: Did you know from the beginning you wanted the camera to be static for the entire film?

Geyrhalter: Yes. If there’s no human, then who would move the camera? 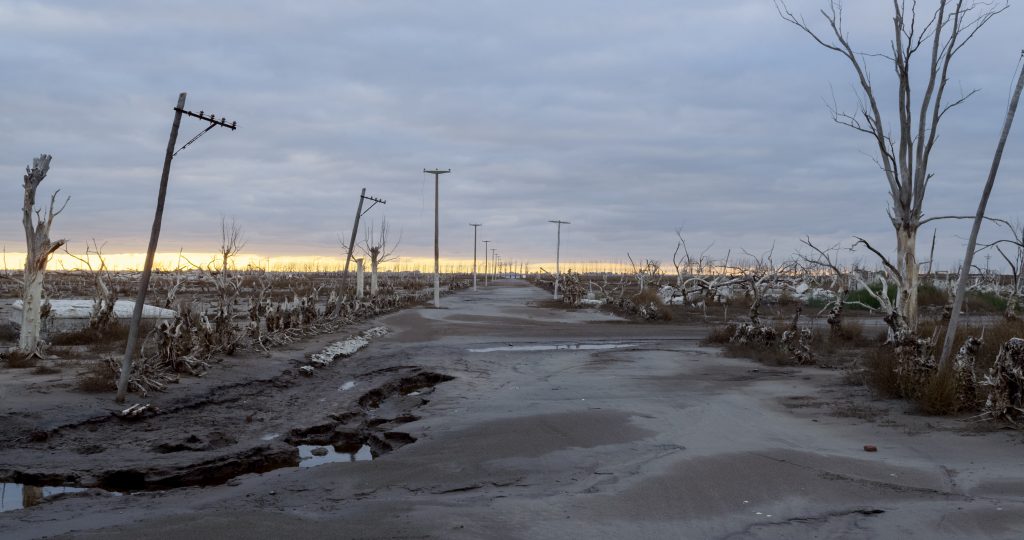