Director James Demo makes 10 to Watch with his upcoming documentary The Peacemaker which premiered at Full Frame 2016. 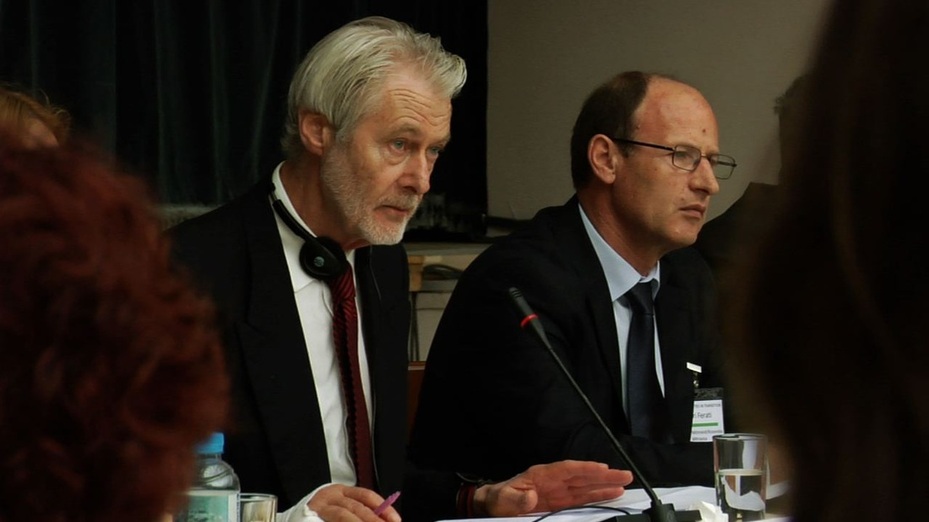 A still from The Peacemaker

The world never seems to lack from an interminable violent conflict, where the level of barbarism wears down the most optimistic soul; where tragedy and suffering appears inevitable and a sense of human agency is lost. Peace processes break down and even the most determined interventionist throws up their hands in defeat.

All of which makes the work of Padraig O’Malley the more remarkable. O’Malley, a Professor of Peace and Reconciliation at University of Massachusetts Boston, has spent his life in opposition to despair and refuting the inevitable. First in Northern Ireland, then Kosovo, Nigeria, Iraq, and several other locales where entrenched, bitter hatred between groups seemed destined for perpetual conflict, O’Malley believed, or rather insisted, otherwise.

Persuading warring factions to pause and meet with their enemy and others who have trod a similar path, he treats armed conflicts like a compulsion and those engaged in them as addicts. In effect, he stages geopolitical interventions. In doing so, he affirms humanity’s ability to cease its worst, most base, self-destructive impulses.

How could this man succeed where governments, international organizations and well-funded non-profits fail? And equally compelling, what makes him even try? These questions inspired and intrigued filmmaker James Demo, who has spent the past five years documenting O’Malley’s life and work for his new film The Peacemaker. Demo started Central Square Films in 2006 and writes, directs, and produces documentary, narrative, and branding films.

The Independent spoke with Demo, as The Peacemaker is preparing for its premiere at Full Frame Documentary Film Festival in April, about O’Malley, financing a documentary, and getting some timely help during the filmmaking process.

David Pierotti: Tell us about your 2016 project. What inspired your work on it?

James Demo: I was fascinated by Padraig’s story – as he has been involved in attempting to solve intractable conflicts in Iraq, Northern Ireland and South Africa for 40 years. When I met him I realized he was such a one-of-a-kind character that I had to make a film about him. Padraig is willing to play on the edge as far as his safety, finances, and personal relationships to achieve what he sets out to accomplish and the question I continued to ask myself was why? It has been a six year journey of exploring that question and I’m looking forward to audiences deciding for themselves as they learn about this remarkable person.

Pierotti: Where is The Peacemaker expected to screen?

Demo: The Peacemaker‘s world premier is at Full Frame in their New Docs program. Internationally, it’s premiering at Hot Docs in their Special Presentations program. Full Frame is wonderfully curated, incredibly well regarded and cares deeply about supporting non-fiction film. I was there with the Garrett Scott Documentary Development Grant in 2014. Hot Docs takes over Toronto and everyone in the documentary world comes for the festival and forum. We are in the same program with Werner Herzog and Pennebaker/Hegedus which is kind of surreal since these are filmmaking heroes that inspired me to want to make films.

Both festivals are known for having the best of audiences and I am absolutely thrilled to be launching my film at Full Frame and then Hot Docs in April.

Pierotti: Your project received some important assistance along the way. Can you tell us about it?

Demo: We have had significant support from within the documentary film world and the film could not have been made without it. The project was selected to three labs – the Sundance Documentary Edit and Story Lab (in 2015), the Film Independent Documentary Lab (in 2015), and the Tribeca Film Institute/A&E StoryLab (in 2014).

The labs are important places to try and fail and they allow for creative contemplation with some of the smartest and talented people in the film world – Kate Amend, Robb Moss and Lucy Walker to name just a few. The labs have meant quite a lot to the film and to my personal growth as a filmmaker.

Pierotti: How did you fund this film or project? 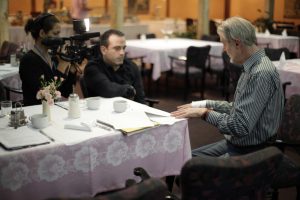 James Demo on the set of The Peacemaker

Demo: We were fortunate to get significant financial support from the Sundance Institute, and they have been a true partner in the making of the film. The LEF Foundation also gave us a well-timed and much needed funding, and Netflix provided us with a grant when the film was selected to the Film Independent Documentary Lab. I also crowdfunded twice through Kickstarter and had numerous fundraising parties. I have used my own money when need be and many talented friends have worked in-kind.

Pierotti: How did you build an audience or awareness for this project?

Demo: We were selected to several high profile pitching forums – the Hot Docs Forum, Points North Forum, and IFP – Spotlight on Documentary – which all have been meaningful in helping us get the word out about the film. Kickstarter also helped us build audience – as we all have learned over the past few years that crowdfunding is as much about building audience as it is about the money.

Pierotti: Can you tell us about your previous work and how did it lead you towards this project?

Demo: My last film was a short comedy starring John Savage, Amanda Plummer, and Karen Black called First Time Long Time. It wasn’t exactly logical to have the next project be a documentary about a peacemaker, but I decided when I became a filmmaker that the only guiding principle would be to tell stories that interest me. So, it all makes sense in that regard.

Pierotti: Tell us about the technology involved in your project. What did you shoot on and why? What kind of look were you going for?

Demo: We shot on Canon and Panasonic cameras throughout the project. I am a firm believer that it is the person holding the camera that matters more than the camera itself and I have been fortunate to get great cinematographers to work on the film (Kevin Belli, Sarah Levy, Beth Balaban) while also shooting quite a bit myself as well. We strove for intimacy and exploration while shooting, staying very close to Padraig throughout – and we shot a lot of footage, especially in places like Iraq, Northern Ireland and Nigeria. We also worked hard to juxtapose the vibrant vast colorful shoots abroad with Padraig’s darker smaller isolated life when home.

Pierotti: What’s next for you?

Demo: They say the film is only half over when you finish it and for the majority of the next year I will be launching The Peacemaker out into the world. Also, I have begun discussions about turning Padraig’s story into narrative scripted feature. I am developing a few ideas for both documentary and narrative and am really excited for what the next year will bring.