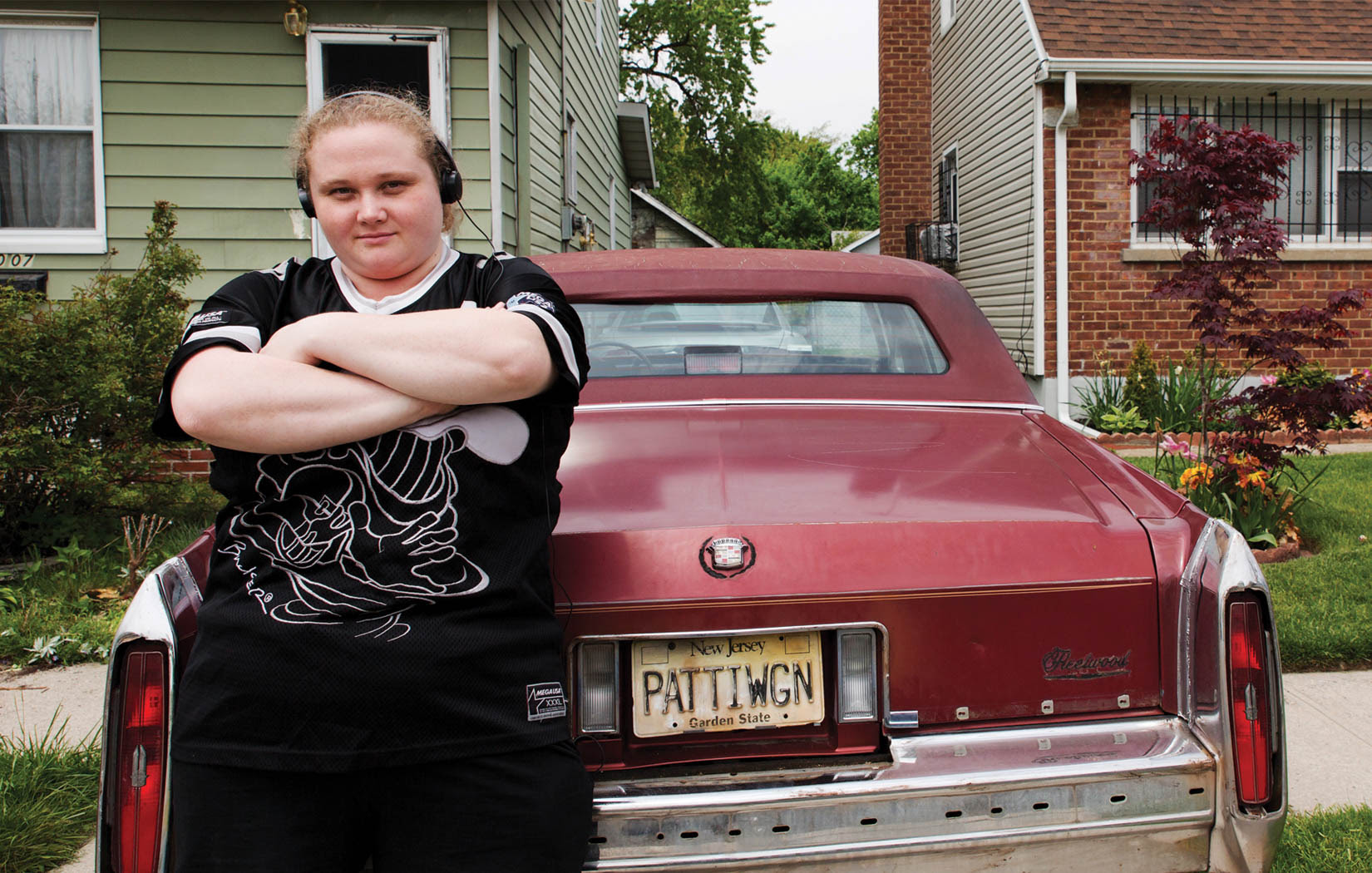 Danielle Macdonald appears in Patti Cake$, an official selection of the U.S. Dramatic Competition at the 2017 Sundance Film Festival. Courtesy of Sundance Institute.

Memo to Film Society of Lincoln Center and Museum of Modern Art curators: Immediately after the whooping and hollering die down from Geramy Jasper’s smashing rap teardown on Opening Night, rush a 35mm print to Quentin Tarantino at his New Beverly Cinema in Los Angeles. It’s a sure bet he’ll add it to his list of all-time indie faves that the Beverly will show forever.

This is serious advice. Jasper is a gravelly headbanger who graduated from Wesleyan but really came-of-age in the dingy aisles of Jersey record and video stores, not unlike Tarantino in Manhattan Beach.   Jasper had fronted a band, The Fever, 15 years ago, that toured hard and built a regional following. He met Tarantino at Sundance, where the old pro offered pointers to the new kid in town. Jasper obviously listened.

Patti Cake$ is a slashing, sweat-drenched wang dang doodle. It’s about the birth of a band (coyly named PB&J for PeanutButterAndJelly) whose music can open cracks in theater walls and make your short hairs stand on end. The movie boasts razor’s edge originality and the kind of visceral visual control that the Coens introduced in Blood Simple and Kathryn Bigelow cemented in Near Dark.

And it’s fronted by a take-no-prisoners 25-year-old Australian darling, Danielle MacDonald, who nails the Jersey-born-and-bred Patricia Dombrowski like her life depended on it. She bills herself as KillaB but the snot-nose locals tag her Dumbo (or maybe Jumbo) because of her girth. As a rapper she’s been trained up by Skyzoo into a formidable female force of unprecedented poise and fury, and for once the eternal ballyhoo line “you have to see and hear her to believe her” takes on real meaning.

Little wonder Fox Searchlight paid more for Patti Cake$ than most of the other producers’ films combined in this ND/NF will ever take home. It came as no surprise when a few dozen critics huddled one early morning for a press screening at the Walter Reade theater, that not one but two uniformed security guards stood in attendance to make sure no criminal (many of us can barely climb subway steps) would record and start hustling $5 Patti Cake$ bootlegs on Canal Street.   Jasper may be creating this weird new paradigm in movie musicals—grindhouse meets art house at the multiplex.

Is the director/songwriter’s 15-tune score that good? Oh yeah, in part because the songs rotate among three glorious acts in shifting settings. MacDonald does her fierce solo raps everywhere from gas stations to club stages. Then there’s her mom, a past-her-prime power balladeer once known as Barb Wire (Bridget Everett), who knocks out savagely soaring tunes to the Jersey bar crowd the way Bette Midler once channeled Joplin in The Rose. Finally, the PB&J complete unit pairs KillaB with Hareesh a/k/a Jheromeo (Siddharth Dhananjay), a slim, high voltage, tightly coiled rapper/guitar partner, and Basterd the Antichrist (Mamoudou Atlie).

Basterd the keyboard wonder is discovered by Patricia in his woodsy cabin studio, a rustic wonder that compares favorably with Electric Ladyland. Initially this kid barely talks and sports a cloudy contact lens plus metal fangs drooping from his mouth that make him look like something The Cryptkeeper left out all night. In true Tarantino/Godard fashion, PB&J is bande a part.

The movie lurches along, stop-starting its rudimentary plot often for what Hollywood used to call “specialty numbers” back in the 1940s. (That’s when songbirds like Liz Scott, Ida Lupino and Dorothy Lamour suddenly halted the story to do a song.) When she’s not running her mouth a-mile-a-minute, Patricia labors politely in her day job as a caterer who plays well with others, and her night job sullenly pouring triple shots for the layabouts in the karaoke bar.

Her one goof and the film’s only crushing putdown comes when she fills a drink order for a zillionaire hip hop czar at a fancy catered event. As this master-of-the-world brags he just spent $2.4 million for a painting, she slides a copy of her PB&J CD next to his glass. He coldly distains the gesture, dismissing her as “a culture vulture.” Of all the humiliating, crass, blue-language trash talk in the movie—and it is endless— this is the one that stings.

But KillaB’s not down for long, and Patti Cake$ eventually soars to triumphant heights at a big concert that evidences an honest-to-God career in bloom. Mom and Patricia’s grand mom (grandly played by a decrepit Cathy Moriarity who looks ready to buy the farm any minute), are both over the moon. You will be, too. 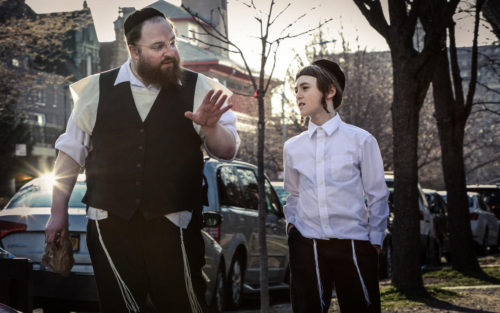 Say this for veteran producer Chris Columbus—he has an eye for marginalized underdogs. Columbus is a producer on Patti Cake$ and an exec producer on the similarly eponymous Menashe, a fixated examination of another outlier, this one struggling along in Borough Parks’ ultra-orthodox Hasidic community. Menashe pulls the veil a little further away from the hidden lifestyles within this insular world, like Rama Burstein’s Fill the Void and Emil Ben-Simon’s The Women’s Balcony that have brightened recent fests.

Menasche Lustig plays a widowed father who’s a cashier, stock boy and custodian in a Kosher grocery. Between accepting the death of his spouse and trying to parent Rieven, his adoring tween son (Ruben Sibowski, an inspired find), Menasche is a case study in ineptitude. He’s late to work, forgets to mop, complains to management that the lettuce is unwashed and unfit to sell, and ruins $1,000 worth of gefilte fish that spills out of his delivery van. He resists the entreaties of the community to find a matchmaker who’ll prescribe him a new wife. His boy breakfasts on soda and cake, and is perpetually late to school. Dad even manages to burn the kugel at a memorial dinner for his wife. Oy, what a schlemiel we have here.

Lustig, like Danielle MacDonald in Patti Cake$, is carrying around far too much weight. On top of that, he doesn’t drink well, and doesn’t seem to ever change his shirt. But we cut him an inordinate amount of slack, partly because he’s depressed over a bad-marriage-gone-worse, and also because his obvious love and concern for Rieven are endearing. He’s respectful to the rabbi when the elder sides with Rieven’s uncle who doesn’t want the boy living with his father. Menasche can even be gentle and attentive to a baby chick he’s bought for the youngster. We keep hoping this flawed and frazzled single parent will pull himself together.

Recent ultra-Orthodox dramas like Fill the Void, Footnote and Felix and Meira have portrayed the males of their austere world as rigidly subservient to the rituals and requirements of their faith. The Women’s Balcony and now Menasche offer their men more breathing room, and the change benefits a screen character like Menasche. He uses a mobile phone in a neighborhood that not only rejects social media but the Internet itself. (When one man timidly reports so-and-so “works for Amazon,” there’s no response and a palpable silence.)

Director Weinstein, an accomplished cinematographer, gives his Brooklyn community a soft-focus, sun dappled look that’s unfailingly pleasant (it will remind you of Zoe Kazan’s almost dreamy Brooklyn nabe in The Exploding Girl), and a languorous music score that moderates the movie’s low-level tensions. For a first film set in a community where the welcome mat for moviemakers is rarely if ever extended, Weinstein has shrewdly built a dramatic platform that’s beckons in the curious viewer.

Some early champions of the picture have described the character of Menasche as a Hasedic Marty, but director Weinstein says “he’s a better Roberto Benigni” (in Life Is Beautiful). This, too, removes most of the sharp edges from Menasche’s journey. When Lustig immerses himself in a hot bath, you want him to pop out of the water not just clean, but ready to move on and reinvent himself as a worker among workers. And maybe he will.

Menasche works hard at cocooning the viewer. It wants very much to be a likable movie. Virtually all the dialogue is spoken in Yiddish, which in itself is something of an on-screen novelty. This may have been yet another source of attraction for experts like Chris Columbus and A24, who’ll give this modest gem the distribution push it richly deserves.