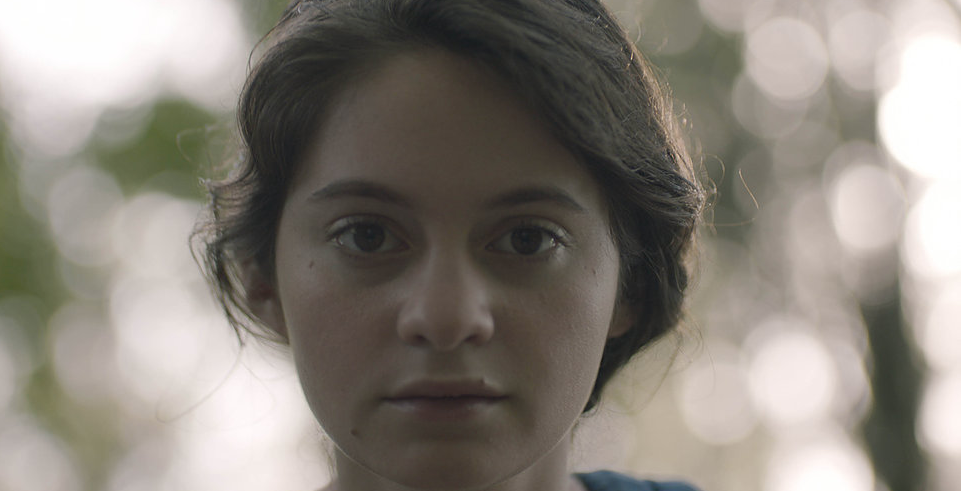 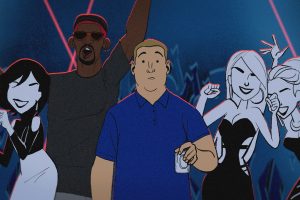 You don’t have to be a Dennis Rodman fan to love Colin Hanks’ mostly animated and entirely hilarious tale of Rodman’s 10-day California rehab following a sprained knee. The owner of the Chicago Bulls basketball team put the 6’10” power forward under the 24/7 supervision of Wally Blasé—a white, baby-faced 25-year-old and pure-as-the-driven-snow assistant athletic trainer from Minnesota. What a mismatch.

This happened during the 1996-97 NBA season, when the Bulls were trying for their fifth championship in seven years. The Bull’s core unit was Michael Jordan, Scottie Pippen and Rodman—known as The Worm. Rodman is less than impressed with Blasé—“all you do is walk around and do nothing,” sniffs the team’s then blond-haired provocateur. Poor Blasé has been tasked to do the impossible—to keep Rodman “down on the reservation” in Orange County, “make sure he wears a condom,” and above all “don’t let him go to Las Vegas.”

Not much goes according to plan. The plane they board heads to Dallas, not Los Angeles, where stretch limos filled with party girls and Dennis’ buddies haul him to the nightclub Rodman owns. Even though the club is closed for the megastar’s coming-home night, the police show up—and even they join the doings. “I’d never seen anything like this,” moans Blasé.

Rodman wakes up Blasé at 8:00 am the next morning, as he’ll do every morning, with the same instructions: “Get up, bro, sleep when you’re dead, we gotta go work out.” They do their exercises and then Rodman starts his day of leisure—like ordering a helicopter to drop them down next to a NASCAR race, then the Texas Motor Speedway.

Arriving in LA from Dallas, they go directly to an exclusive club where Prince is in attendance with his people. Dennis and the rock legend don’t have much to say to each other. Wally has been dressed in a No Fear sweatshirt and tries bantering with Prince—and can’t even make eye contact. Keep in mind all of this is flying by as streamlined cartoons, cleverly designed and animated by Super Sol.

The next day Dennis is fitted for his Lamborghini. (He’s flown in a mechanic from Italy to assist.) Wally is given Rodman’s Porsche to follow while Rodman takes a test drive. In succeeding days, Dennis meets with Jerry Bruckheimer to discuss a role in Armageddon; rents a private plane and flies to Sacramento to spend some quality time with his daughter; takes a meeting with Jay Leno; then decides to haul his female party entourage to Vegas. Here Wally draws the line; he pleads with Rodman not to do Vegas because he’ll get fired. Dennis backs down, and they fly home to Chicago.

Wally has survived his trial-by-fire. “You’re like that kid in Almost Famous,” Michael Jordan tells Wally admiringly. Plus Rodman has made a new friend he trusts: “My arms are always open to hug you,” Dennis beams to Wally. The Chicago Bulls take their 5th NBA title, and Wally goes on to become the head athletic trainer for the Atlanta Hawks for 15 years.

Tribeca’s 57 shorts are rich with animation or stop motion, curated by Sharon Badal (VP, Filmmaker Relations and Shorts Programming) and her staff out of 4,385 submissions. Gregory Casares’ Angel, Dmitry Milkin’s Curpigeon, Glen Keane’s Dear Basketball, Limbert Fabian’s Escape, Kristin Ulseth’s Odd Is An Egg, Vincent Gallagher’s Second To None, Julie Pott’s Summer Camp Island, Alain Delannoy’s The Talk: True Stories About The Birds & The Bees are all worthy. But Colin Hanks and ESPN’s tale of Dennis and Wally will put the biggest smile on your face. 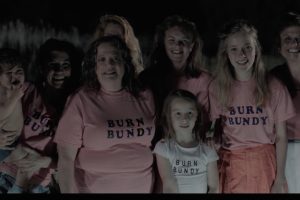 A still from Fry Day

In 1989 the serial mass murderer Ted Bundy was put to death in Florida State Prison at Starke. The night before he was executed for butchering at least 30 young women and girls in seven states in the late 1970s, a “Ted Bundy BBQ” was held in a pasture across from the prison.

Laura Moss’ handsomely styled and sinister re-creation of that night is a sight to behold. It’s her graduate thesis film at NYU, and here’s her casting profile for Louryn, the lead teen who’ll play the girl who walks around shooting $2 Polaroids of kids wearing Bundy masks, “Burn Bundy” tees and “Teddy, you’re the toast with the most” signs: “Has long brown hair (just like Ted Bundy’s victims); her curiosity about the world sometimes overpowers her shyness, but sometimes her shyness wins; wants to fit in, but always screws up by inadvertently saying the wrong thing.”

Moss cast Jordyn Di Natale, an experienced stage actress who matches the profile with an uncanny mix of adolescent confidence and vulnerability that makes you vaguely uneasy from the first minutes. Louryn’s an engaging young entrepreneur, holding babies and getting girls in group shots to sing out “BURRRNNNN BUNNDY!” Then she accepts a ride, reluctantly, in a truck full of foul-mouth older male classmates to Grannies, a one-room shack of a diner in the woods, where the boys ask Louryn to order out chicken and biscuits.

At this moment Fry Day pulls its first real surprise, and it’s a beauty—maybe one of the biggest of this festival: Grannie is played by Elizabeth Ashley, one of the stage and screen’s fiercest glam actresses, and for many years the foremost female interpreter of Tennessee William’s hothouse southern plays. Ashley is grand in a bit. Louryn takes a snapshot of her, though one of the boys befouls it before it dries. Then the boys haul their lone female companion deeper into the woods, where “Wipe the Smile Off His Face” is painted on the side of a barn. The tension begins to tighten and Moss has a few more surprises up her sleeve.

New Milford, Connecticut stands in for Florida. Greta Zozula’s night lensing on Super 16mm is softly, deceivingly inviting; this superior creeper has an assured and well-edited look. It can stand next to—no, let’s say it can lie next to any feature film in TFF’s Midnight section. 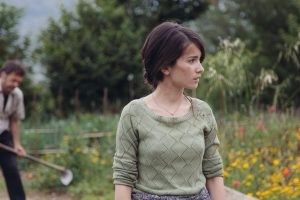 NInni Bruschetta and Claudia Gusmano as father and daughter in Viola, Franca

With sexual harassment in the workplace capturing the world’s attention, Marta Savina’s adaptation of a turning point in Italian law that forever changed how rape victims are perceived and treated is a festival highlight.

Savina graduated from UCLA’s MFA Directing Program, and has reached back to Alcamo, Sicily, in 1965. We watch the religious farm girl, Franca (Claudia Gusmano), in church, being blessed by the priest (Maurizio Pu-glisi) and given the red cape as a symbol of her purity. She’s the object of intense interest from Filippo (Carlo Calderone), a handsome, wealthy and possessive young rake. He’s taken with Franca and gives her a red rose, demanding she rendezvous with him. She rejects him.

The young man next approaches her father (Ninni Bruschetta), telling him Franca is a “wonderful girl you should teach manners to, so she knows what her place is.” Dad firmly tells Filippo his daughter’s not for him. When the father drives off on an errand, Filippo attacks and rapes the struggling young woman, later telling her father to “buy a white dress,” and expecting Franca will automatically marry him.

The priest supports this groom-in-waiting with the Church’s traditional position. “It’s not your fault,” he consoles Franca. “Men are hot-headed sometimes. It was all a misunderstanding, but God forgives everyone, and everything. And the Church has the power to transform the sin of a girl into the virtue of a wife.”

As the camera pushes in slowly on the bruised Franca, framing a tight closeup of the pensive young woman, we hear a confrontation between dad and the priest. “I’m going to have him arrested,” says her father. “Don’t be silly,” counters the priest. “Don’t make things worse. The damage is done, she has to get married.” And the father replies, “I’ve never killed anyone, that’s why I’m having him arrested.” The priest is still incredulous. “Do you want everyone looking at her like she’s damaged?” He warns Franca not to show up at an upcoming church procession, that she “needs to stay in hiding” as a woman without honor.

But she doesn’t stay in hiding. As sound designer Jeffrey Alan Jones’ marvelous musical motif—eloquent as silk and laced with a growing liturgical grace—slides onto the soundtrack, we track with Franca making her way to the head of a huge procession gathering on the church steps. She returns the red cape to its place next to the priest, and turns to us, a tiny smile of triumph on her face.

Franca and her father rejected what was then called a “reparatory marriage.” Filippo Melodia was indicted in Italy’s first rape trial, found guilty and sentenced to 11 years in prison. The law that forced a woman to marry her own rapist was finally repealed in 1981.

Like her filmic counterpart Jordan Di Natale in Fry Day, Claudia Gusmano anchors this authentic history lesson with a sublime innocence that borders on radiance. The Tribeca fest continues to inform, educate and delight audiences with the world’s premiere shorts.