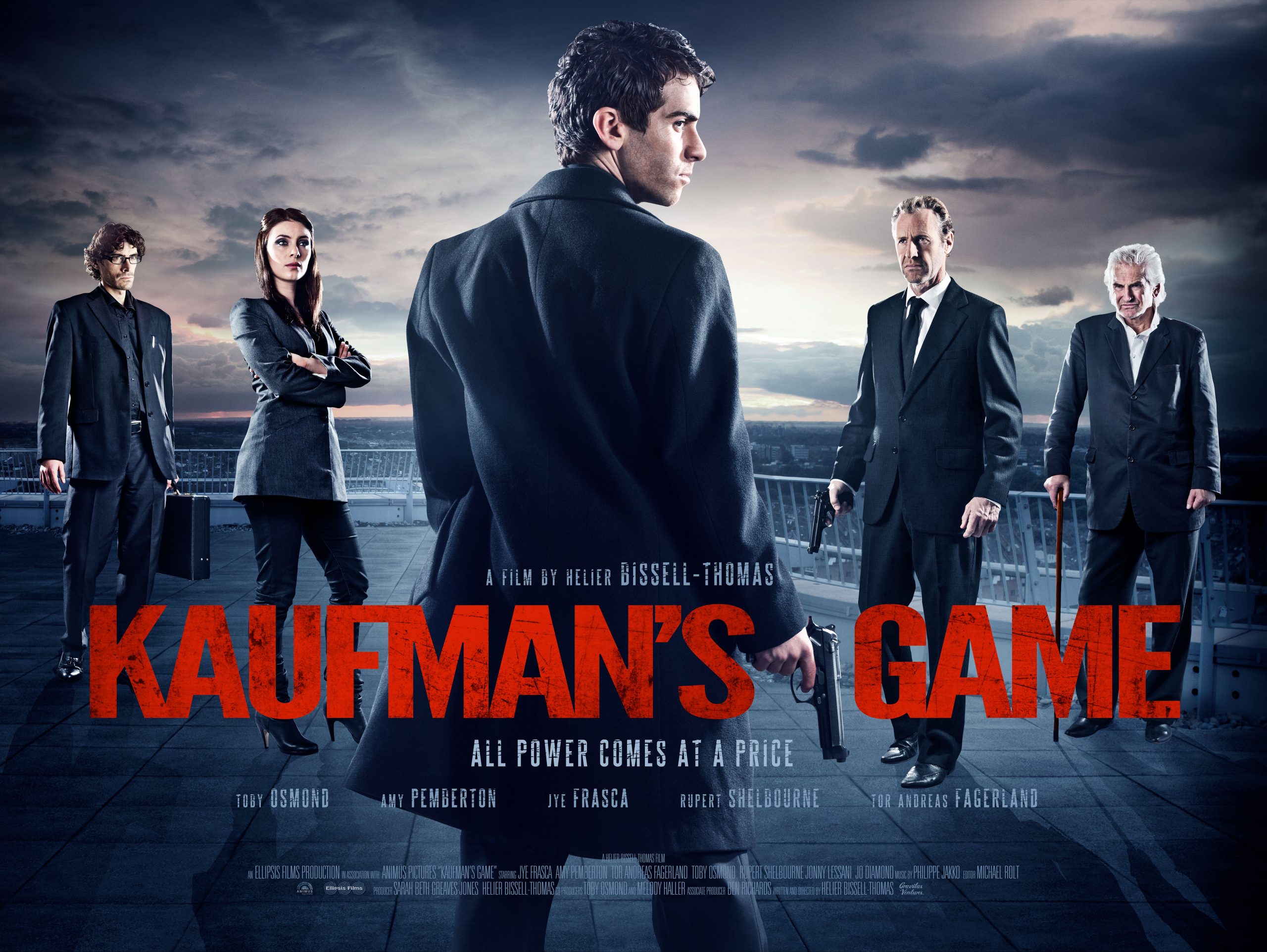 Kaufman’s Game is a full-length film written and directed by Helier Bissell-Thomas. It follows Stanley, an unemployed young man with a passion for boxing, who becomes drawn into the violent operations of a powerful organization. This is a film about influence, determination and self-destruction. The Independent caught up with Helier Bissell-Thomas to discuss the film’s production and its influences.

What was your goal with Kaufman’s Game?  What drew you to this project? I know you have many literary influences; perhaps you can name a few by title. 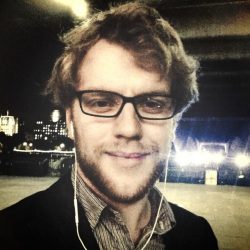 Helier Bissell-Thomas outside the British Film Institute on Southbank, in London.

My goal with Kaufman’s Game was to make a powerful feature-length movie (my first one) without the luxury of a million dollar budget, A-List cast, or major studio support.  I wanted this film to showcase the cinematic Film Noir aesthetics I am interested in while maintaining the commercial viability of the thriller genre brand. In my view, these forms are nearly one in the same, stylistically speaking, the thriller genre having developed from Noir over the decades.

My love of the writings of Franz Kafka and Raymond Chandler drew me to working in contemporary Film Noir, you might call this “Neo-Noir,” I suppose, but most moviegoers recognize this type of film as a “Thriller” or a “Psychological Thriller” these days. The way I see it, genre titles have more to do with the packaging and selling movies. Producers rely on recognizable “types” to pitch movies to the right audience.

As a teenager, I read Robert Rodriguez’s Rebel Without A Crew about the making of his brilliant micro budget debut El Mariachi. I think this is perhaps the best memoir to date of the mentality a first-time film director must adopt in order to get an indie movie off the ground, against all the odds. Rodriguez’s book is a truly inspiring read, one I kept very close while making this movie. Catching The Big Fish by David Lynch was helpful too.

Can you elaborate on the aesthetic style of the film? What were you trying to achieve? 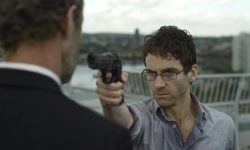 Absolutely! I have always had a real affection for both suspense and minimalism in cinema, and I feel that the low-to-no budget filmmaking model really lends itself to cinematic minimalism and suspense. When you have little money to play with, in terms of your production, you can still afford to set scenes strongly, simply by stripping them back to the fundamental core elementals of the narrative. By simplifying the set, technically and in other ways, you save both time and money and keep the audience focused on the characters.

Regarding cast, you always want “more performance,” but with production design and setting up your shots, less might very well mean more in the end. I’ve watched a lot of the movies of Andrei Tarkovsky and Stanley Kubrick; these are influences. The suspense of storytelling in cinema is largely dictated by the way a film is edited and the music score too. The raw material we shot for Kaufman’s Game provided well for both the edit and scoring we were after.

I understand you wrote and directed this film in fulfillment of your Master’s Degree. Can you say more about your graduate work, where you studied and the focus of the program? 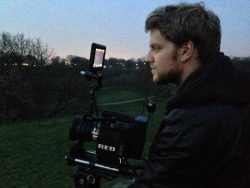 I studied at Staffordshire University in England’s West Midlands through their “negotiated learning program.” I was able to propose Kaufman’s Game as my thesis piece. There was no other university or even a film school in Britain that offered academic support to directors in the area of feature length film productions at that time; it was all shorts. So, when I was accepted into the program, I was over the moon!

In addition, I’d taken Dov Simens’s legendary weekend course in film producing, and it really opened my eyes to the business side of making movies—how to put together production budgets and save money. Dov is an incredible teacher and a lovely chap. All my friends who attended film schools came away with interesting short films but feeling like they hadn’t learned enough about the business side of filmmaking. The fundamental flaw in the film school system currently is that schools charge substantial amounts of money for tuition fees and then encourage film students to make short films—a medium which, to date, has no commercial value. So I now feel incredibly lucky to have trusted my gut (informed by Dov’s advice) in choosing to make the project that I did. 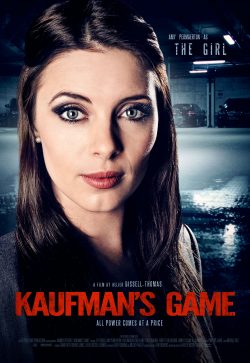 Amy Pemberton as The Girl; the mysterious, nameless femme fatale archetype of the story in Kaufman’s Game

How did you get Kaufman’s Game off the ground? Can you discuss the pre-production phase of your work? How were you able to finance the film?

Begging, borrowing and nearly stealing! With hindsight, it was really the script that brought the right people to the table initially. I was fortunate to have a very committed and supportive cast of professional actors keen to do the movie for deferred shares in its net profit; which then helped attract production support in other areas. I called in favors from friends I’d worked with on music videos, ads, and short films to support the production, and they were indispensable. My classmates at university were eager too.

The pre-production process was mainly a series of meetings with location owners, kit and catering companies—simply learning who was available to help us out.  We cut costs wherever possible, but when that wasn’t an option, the movie, like most micro budget debuts, was financed with credit cards. It’s a route I fully recommend to all movie producers starting out on their journey, with the proviso that they believe in the movie enough to take the gamble with the bank. Many of the major banks in Britain and America are very supportive of creative artists.

What were some specific challenges you faced in creating the film, and what were the ways you were able to work around these? 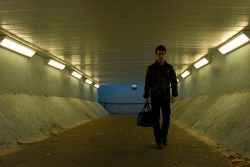 Jye Frasca (Stanley) walking through the underpass on Wandsworth Roundabout

The main challenge was time. I wanted to shoot at the magic hour; meaning shooting at dusk, as much as possible, and that is a miniscule fifteen minute window average of shooting time per day—a cinematographer’s nightmare! I chose very flare-sensitive lenses to catch the full power of the dusk shots. I have the greatest respect for Terence Malick and what he was able to achieve technically with that fifteen minute window shooting Days of Heaven. It’s one of the most beautiful revisionist westerns ever made. The movie is a master class in cinematography. I think the only way one can work around the time challenge factor is by being frugal about the number of shot set ups, and the number of takes one shoots per set up. When you’re shooting on state of the art digital film cameras a lot of your risk factors are inherently limited by the tools of the medium; in this case RED, a camera company I will happily recommend and use again in future.

What was your approach to working with cast and crew on this film?

I was very clear with the cast about the style I wanted to achieve on this movie, and none of them challenged this. They all understood the direction of the story and the roles they were playing. I think when you describe an actor’s character to them in terms of archetype you allow them some creative freedom within the style and genre of the story. I gave the cast gentle reassurances about their performances here and there, but they knew what they were doing, which meant I was able to focus on my shots and giving the dark, contrasted Neo Film Noir aesthetic all that I could, around the individual emotive nuances that each cast member imbued into the canvas of the movie. 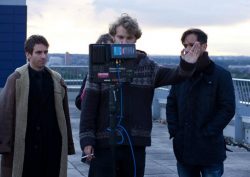 On set, LtoR: Jye Frasca, Helier Bissell-Thomas behind the director’s monitor, and Genki McClure, all atop Falcon Wharf, Battersea, in London

I think their performances are all really quite brilliant, especially considering how little time we had to block and run through scenes. There is a focused spontaneity to their performances in Kaufman’s Game, and I’m proud of all of their work here. I kept the crew as small as I possibly could, in both production and post-production; the smaller a crew the more control one has over it as director. I see value in keeping crew numbers as low as possible regardless of a movie’s budget. The trick to keeping a crew working hard and fast on this kind of production is to keep them very well fed. If energy levels are kept high, people don’t mind working late and at tremendous speed to make the vision of the film a reality.

I understand that you’ve had success within the festival circuit. Where has Kaufman’s Game featured and how has it been recognized? 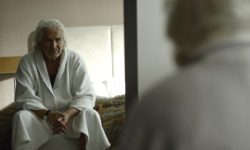 We certainly have! We were selected for and won the Gold Award at the LA Neo Noir Film Festival, and a great honour it was considering they’re just about the only Noir festival! We are currently screening at the Long Island International Film Festival, for their 35th edition, which was another great honour! We’ve been selected for the upcoming Buffalo Niagara International Film Festival and the Yellow Fever Independent Film Festival. Some filmmaker friends told me that we might get lucky with festivals or distribution but probably not both. I am happy to have proven them wrong, having secured both commercial distribution and festival release for my movie. We’ve secured the near impossible, to my mind, for indie movies in the current distribution climate—a theatrical release in cinemas. Kaufman’s Game is be distributed by Gravitas Ventures, which we are immensely proud of. Anyone who ever says you can’t break the rules and go your own way in this industry will hopefully see this movie as a refreshing example of thinking and working bold.

How else, beyond festivals, have you developed an audience for Kaufman’s Game?

To be honest, beyond festivals, my movie is finding an audience in the oldest and most powerful means available: word of mouth! A film recommendation by a friend who knows your particular tastes is always more compelling than a critic’s word on the matter. I think we can all agree on that? All the festival screenings and the theatrical will certainly aid us in growing an audience. For independent film producers and directors today, Gravitas is something like a 21st-century Miramax; they’re really great to work with.

What are your plans moving forward, for this film or for another project?

Well, although this movie was absolutely a passion project, I always hoped to use it as a springboard for other work. And I am in preproduction right now on a new thriller. My theme to date has been optimism; I believe in good luck and in pursuing one’s dreams, regardless of the odds. I think luck is what happens when preparation meets opportunity.