Sound like too-much-ain’t-enough?  One is reminded of a Film Society poster that used to hang in the lobby of the Walter Reade Theater, surely Manhattan’s premiere viewing auditorium.  It pictured a vampish young woman in her late 20s, slouched in basic black with a forlorn expression and a caption directed to film buffs of all ages, “He says if I spend any more time here at the movies, I might as well move in.”

Your critic’s days are indeed darker than your nights, and it’s a pleasure to roll out four Early Bird choices in the shorts venue: 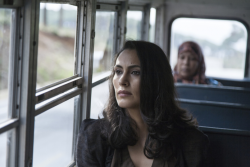 And so she’s going to perform a phone sex ritual that’s at once cinematically enthralling as well as physically arousing.  His seed will be ejaculated into the film’s title—an empty bonbon core.  (None of this is directly shown.) He’s able to transfer the tiny package through the screen between them without being noticed by the guards. On her six-hour darkened bus ride from prison back to their home, she’s able to insert the carrier and inseminate herself.  Virtually all the action here is played out with screen filling facial close-ups of Ms. Meddine, an actress you will long remember. It is a stunning piece of both spoken seduction and silent mime, reserved yet filled with soulful longing. 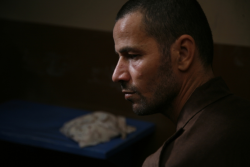 Mayasi’s technical credits—editing, cinematography, production design, music— are as smooth and assured as any main slate feature. And Meddine and Bakri have contributed the most tasteful yet imaginative sex scene in the entire festival.

The fest’s Genre Stories program positions itself as featuring “horror, thriller, sci-fi, pitch-black comedy, twisted noir, and fantasy.”  Last year’s NYFF critic’s pick was the Kizler brothers’ Can’t Take My Eyes Off You from Germany in which a teen in a woodsy suburban home is pursued by something in the shadows, just before she discovers her mom twitching in death throes in a kitchen chair.

Australia’s Natalie James also understands the less-is-more, one-shock imperative of the short horror film. Creswick is similarly set in an isolated rural home where a grown daughter (Dana Miltins) has returned to help her aging father (Chris Orchard) pack up his belongings and carpentry tools. Dad thinks there’s something else living on the property—maybe the daughter spots it in her old sketchbook (shades of The Babadook, another critic’s choice).

We’re also trying to figure out what the father’s building in his adjoining workshop. The bigger question is what he’s carrying into his bedroom over his shoulder in the closing seconds.  From a mid-range view it looks like a black sack or maybe a big dead something. Then whatever it is opens its eyes.

Ms. James has crafted a beauty that’s every bit the equal of the opening minutes of Stephen King’s It,  with the little boy following his paper boat floating down a rain-soaked gutter into a storm drain, where the killer clown Pennywise can’t wait to sink his spiky teeth into the kid.  King’s horror opus runs 135 minutes and is essentially a non-stop scare-on-scare marathon that’s nearly earned half a billion dollars.  At 10 minutes, Creswick will attract discerning adults who’ll get equal value—maybe better value— up on the big screen.

L.B. Williams as Mose Wright in My Nephew Emmett

The New York Stories program, now in its third year, “showcases work from some of the most exciting filmmakers living and working in the city today,” though not all films are set in Manhattan or surrounding boroughs.

Kevin Wilson, Jr.’s My Nephew Emmett is a stirring, elegiac re-creation of the final day and night on earth of Emmett Till. The 14-year-old Till  (Joshua Wright, perfectly cast) was seized from his uncle’s two-room cabin in rural Mississippi, pistol-whipped and lynched in August, 1955, for allegedly whistling at a young white woman. 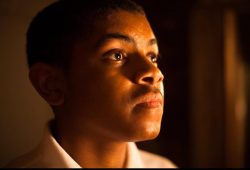 Joshua Wright as Emmett Till in My Nephew Emmett

Wilson created the film as part of his graduate film program at New York University, with the full support of his professor, director Spike Lee. Wearing his academic hat here, Lee also coordinated the entire film crew of NYU grad students as they traveled to and shot at Tallahatchie Flats in Greenwood, Mississippi, close to the original home of Till’s uncle, Mose Wright (L.B. Williams) and other family members. Lee also provided significant post-production support, along with GoFundMe contributors.

This 19-minute film is a triumph at every level. Wilson wastes no time etching a cohesive portrait of Till’s extended family, a close-knit ensemble. (In addition to Williams’ incisive portrait of Mose Wright, the actors Jasmine Guy, Dorian Davis, Chris Steele and Tylon Larry register strongly as Elizabeth, Maurice, Robert and Simian Wright.) Joshua Wright is heart-breakingly innocent as the handsome young Till. The supporting armed killers and the accusing woman who IDs Emmett fill their roles admirably.

Wilson concludes My Nephew Emmett with Williams’ Mose Wright, having identified Till’s mutilated corpse, being interviewed by local press on his version of events.  The actor’s testimony briefly transitions into actual footage of Mr. Wright giving that interview in 1955.  It’s an epiphany moment in a film that will kick-start Kevin Wilson, Jr.’s film career in every right way.

The final shorts program is documentary non-fiction, and Cucli vividly demonstrates how—in theory—a short could partner a feature film with comparative thematic content in an NYFF setting.   This has happened in past festivals, though not recently.  (In the early 20th century, a short, a serial, a newsreel and a cartoon complemented the main feature in U.S. theaters.)   Once in a blue moon today, an animated short gets tucked along with a feature presentation.

Cucli introduces us to a long-distance trucker and widower, Ramon Carcassona, who initially befriends an injured white dove who’s fallen into his house, only to find the bird adapting the gentle, widowed driver as its—what?  Companion?  Food source?  Parent?  Director Marrades has captured one of those rare, nature-seeking-and-finding-interdependence-with-humanity encounters that would show well with The Rider, an eyes-wide-open narrative drama about a rodeo cowboy and horse trainer. Both Cucli and The Rider catch and hold you off-guard because in large part they’re lucky accidents that happen beyond the control of either director.

Ramon swabs the dove with iodine, and the bird responds by holding onto his shoulder, peering down the highway through his windshield.   They have adjoining overnight bunks in his truck. The dove is let out for exercise flights and always returns.  When mischievous boys approach the dove wearing a giant papier-mâché bird costume, the dove hops away.  Ramon’s take is that he’s found a born-again pal who travels well, unlike his deceased wife who was always carsick.  He believes the dove may be his beloved spouse, reincarnated.  The bird nestles into his cheek, just as it hovers protectively next to an egg.   Ramon faces his own mortality without fear— he’s confident that “things are meant to happen so that you can improve as a person.”

Marrades’ short is framed and played without frills or guile.  It has a gentle, relaxed and vaguely spiritual air that concludes with the dove finding another dove to bill-and-coo with.  This little movie is, from start to finish, one happy ending.