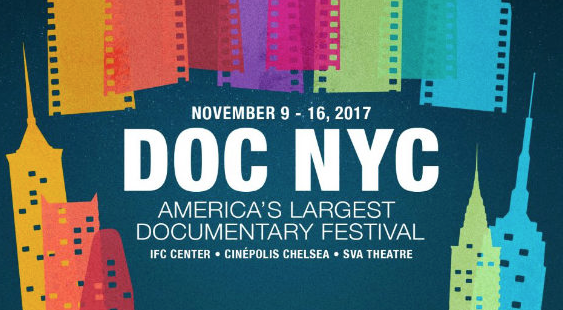 The new distribution company, Neon, has revised a traditional practice of packaging a complementary short with their feature releases. Critics still largely ignore shorts, but audiences flock to them, and the crowds aren’t just the filmmaker’s relatives, friends and funders. Sometimes a short can migrate from one festival to another, like Shawn Christopher’s Curfew, which premiered at Tribeca downtown, then moved uptown to The New York Film Festival, eventually winning the 2010 Oscar for Best Short. It’s possible to discover a significant director being born before your eyes in a short. Look at Whiplash, which started out as a Tribeca short and a few years later took home three feature Oscars.

You’d think doc shorts would be easier to make, because the concept already exists, and the filmmaker doesn’t have to invent the idea. But there’s the trap: what’s fascinating to one viewer may not hold or even interest another. The great real-life concepts have a built-in universality and a going-in premise of surprise. DOC NYC’s 8th annual fest has helpfully arranged over 60 selections into ten defined categories like “City Lights,” “Recorded Memory” and “Mother Earth.”

Two recent feature-length documentaries have examined drug trafficking from Mexico into America—Cartel Land, which focused on the violent Mexican side, and Western, which dug into the facade of denial on the American side. Turner and Bill Ross’s Western was a critic’s choice at the 2015 New Directors fest and is a measured, reflective portrait of changing life styles in and around Eagle Pass, Texas, which borders the Rio Grande River. 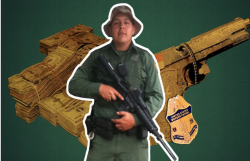 The filmmakers explored open “crawl holes” under the black steel fence separating the two countries, the federal prison at Piedras Negras where 130 prisons tunneled their way out, and the fact that 5,000 corpses (one a day over the past decade) have been found decaying out in the badlands. American cattle ranchers are deeply unsettled—one reflects that cartels didn’t use to mess with Texas business owners, “but now they just kill anybody.” Life in Eagle Pass, the Western doc ruefully concluded, is no longer “just another day in paradise.”

Jeremy Raff’s concise 15-minute portrait of border patrol corruption adds another chilling chapter to this unfolding menace. It’s part of the Atlantic magazine’s video platform series on YouTube, yet another inventive form of non-theatrical journalistic distribution. The original title is Agent for Hire: The Threat of Border Patrol Corruption.

The focus is on one more corpse, this one a tire shop worker found floating in the South Padre Island River in Texas. We learn he was a snitch tied to a family of brothers, one of whose homes had a safe stuffed with cocaine and meth, tray, scale, baggies, $89,000 in cash, a gold-plated cartel pistol, and a border patrol badge.  One of the brothers (pictured in outline) was the border patrol agent. “This wasn’t just one bad apple,” the former Internal Affairs Chief at U.S. Customs and Border Protection explains, “but part of a rate of corruption that exceeded that of any other federal law enforcement agency.”

Various investigators from the Cameron County sheriff’s office, along with the chief of the U.S. border patrol, pile on the bad news: In the last decade over 100 customs and border protection officials have been arrested, charged or convicted of corruption. The majority of agent applicants fail a lie detector test. Agents are being lost faster than the government can hire them. “Walls don’t do you any good if you can hire someone to wave you through it.” 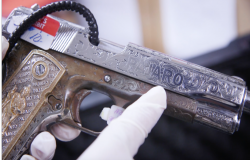 In Raff’s example, one brother was arrested, tried and sentenced to 20 years in prison, though he was acquitted of the murder charge. The prosecuting attorney placed the open safe in front of the jury to stare at, throughout the trial. “He who holds the cow’s hoof, also commits the sin of slaughter,” he remarks laconically. That’s as keen a bottom line as anything you’ll hear in Raff’s terse, warning signal doc, and it is not fake news.

The Cartel Murder That Exposed A Rogue US Border Patrol Agent” shows as part of “Justice For All” on Sat. Nov. 11 at 10:15AM at the IFC theaters in Manhattan.

So what’s new with Joan Ganz Cooney, the 88-year-old co-founder of the Sesame Workshop and CEO of the Children’s Television Workshop? It’s a pleasure to report she’s an executive producer of Thomas Lennon’s surprising and beguiling history of Edwins in Cleveland—an authentic three-star French restaurant run almost entirely by residents recently out of Ohio prisons. The name Edwins is a marriage of “Education Wins” and its mission statement includes “instilling leadership skills in formerly incarcerated men and women through an education in culinary arts, providing our community with tomorrow’s leaders.” 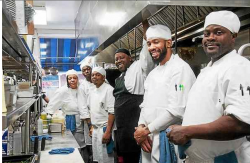 Chefs at Edwins restaurant in Cleveland

DOC NYC’s curators place Lennon’s short in its “Surviving the System” program, but Knife Skills is more accurately a strength-and-hope builder of the first order. Conceived as a look-back at Edwins’ in 2013 six weeks before opening, it uses the familiar movie device of a countdown against time. The goal in six weeks is training 80 former inmates—largely men of color who’ve served time for drug trafficking and robbery, one of whom is sheltered at The Salvation Army. They’ll learn the basics of ingredients and sauces, the preparation and serving of traditional French fare like artichokes barigoule and paupiettes de poison du jour (market fish wrapped in crispy potatoes with French green beans).

The founding entrepreneur, CEO and host is Brandon Chrostowski, a veteran Cleveland restaurateur who has a police record in Detroit for drug possession and evading arrest. He drives a motorcycle to work and describes himself without emotion as “trash,” though we note he’s married and a brand-new father. With his chef de cuisine Gilbert and sous chef Gerry (both experienced in Cleveland restaurants but neither ex-cons), Brandon sets to work teaching how to make and serve 25 dishes.

The regimen starts with a lineup of men and women being measured for impeccable, starched kitchen uniforms instead of prison garb. They’ll quickly come to learn the eight kinds of knife cuts in a kitchen.  Brandon is an eternal mentor/cheerleader, and he believes in forgiveness “not seven times but 77 times.” Twenty of his trainees fall away or are dropped in the journey, and one is even arrested trying to rob a bank. “This family won’t be broken,” vows Brandon, who visits prisoners and encourages their return.

With its well-reviewed cuisine, slate blue walls, upholstered banquettes, fireplace and extensive wine list, Edwins opens successfully and has found a successful niche in Cleveland’s nouvelle-chic dining crowd, serving 20,000 guests annually. Brandon and his continuing Edwins’ crew of 180 “graduates” have become experts at “stirring the pot” of common humanity. Knife Skills is one for the heart, a real keeper.

This year, DOC NYC is showing no less than seven feature-length docs encompassing vital aspects of the Jewish experience, including biopics on song-and-dance man Sammy Davis, Jr., violin master Itzhak Perlman, and maverick filmmaker Larry Cohen. But one of the guiding tenants of Jewish life is “never forget,” which encompasses all aspects of the Holocaust. Randall Christopher’s fast paced, fast-animated summation of the capture of Adolf Eichmann is a whirling dervish of a short. Illustrated, animated, written and directed by Christopher in raw, ever-moving black-and-white compositions, it’s a first-rate addition not just to DOC NYC, but to the Manhattan Museum of Jewish Heritage’s current exhibition, “Operation Finale: The Capture and Trial of Adolf Eichmann.”

The museum’s exhibit runs through December 22, and is a co-production with Mossad, the Israeli Secret Intelligence Service (plus museums in Cleveland and Tel Aviv), tracing the meticulous research, tracking and abduction of the notorious Nazi officer. The Driver is Red, Christopher’s short, lets Zvi Aharoni (1921-2012), voiced by Mark Pinter, tell his first-person story as the Nazi hunter and 20-year Mossad agent primarily responsible for finding Eichmann hiding in Buenos Aires in 1960.

The Nazi leader was working for Mercedes-Benz under the name “Ricardo Klement.” The agent locates Klement’s run-down home through a blind man (drawn here with Aharoni) but the tenant has moved on, leaving no forwarding address. Aharoni scouts the outer edges of the city, finally spotting Klement getting off a bus and walking to a run-down shack without electricity. This is the man who transported millions to the killing zones of concentration camps.

In the next days Aharoni takes the same bus as Eichmann, sitting directly behind him and confirming his identity. “The noose he thought he’d escaped had found him, was closing in on him,” the agent narrates. Logistics experts, disguise specialists, documents forgers, soldiers and a doctor dispatched by Mossad in Israel are flown into Buenos Aires from different countries to avoid any suspicion on the planned kidnapping. Safe houses are rented and prepared.

Eichmann is seized getting off the bus and his first words to Aharoni are “I have already resigned myself to my fate.” He’s rushed to Tel Aviv, his eyes covered with goggles. Eichman was found guilty of war crimes and crimes against humanity and executed in 1962. Zvi Aharoni continued his work with Mossad until his retirement. Christopher’s striking drawings-in-continual-progress, combined with Spencer Rabin’s haunting original score and Pinter’s impeccable narration, are an artistic triumph in miniature. The Museum of Jewish Heritage should lose no time in bundling this excellent work into its exhibition.

One thing you learn watching over 60 curated doc shorts is that a primary discipline is compressing the storytelling into a cohesive flow—one that often entertains as it informs and educates. Watch how effortlessly Yulia Puskuliyska, an alum of New York University’s Tisch School of the Arts (Intermediate Documentary Production in Havana) does it: The woman pictured is keeping a 19th century oral art of Cuban storytelling alive in—of all places—a cigar factory.  Gricel Valdes-Lombillo Perez has been reporting for work at 8:30am since 1992. Her job is reading a mix of news and fiction to 250 mostly female leaf-strippers, wrapper selectors and color graders. Why? To keep them happy and meeting their daily production quotas.

The storyteller in La Lectora

In Piskuliyska’s utterly immersive 10-minute visit—lensed in crystal-clear CinemaScope panoramas—Gricel is a living link to Cuba’s el lector de taba queria. She greets her workers by name, blows them kisses, and “carries you in my heart.” Her readings this session include an essay on onions, followed by a story on how the classic painter Albrecht Durer battles and triumphs over adversity. Worker production soars as she reads—a favorite novel that’s been read chapter by chapter more than once is The Count of Monte Cristo. When Gricel finishes her session, she lights up a Montecristos cigar fresh off the assembly line. The labor force loves her, applauding by tapping their chaveta knives on their work tables. 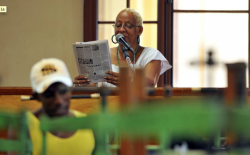 La Lectora is an inspiring ethnographic snapshot of how 250 cigar makers spend a pleasant day turning out 11, 780 cigars. It shows as part of “Dream Weavers” Sun. Nov. 12 at 10:15am at IFC.