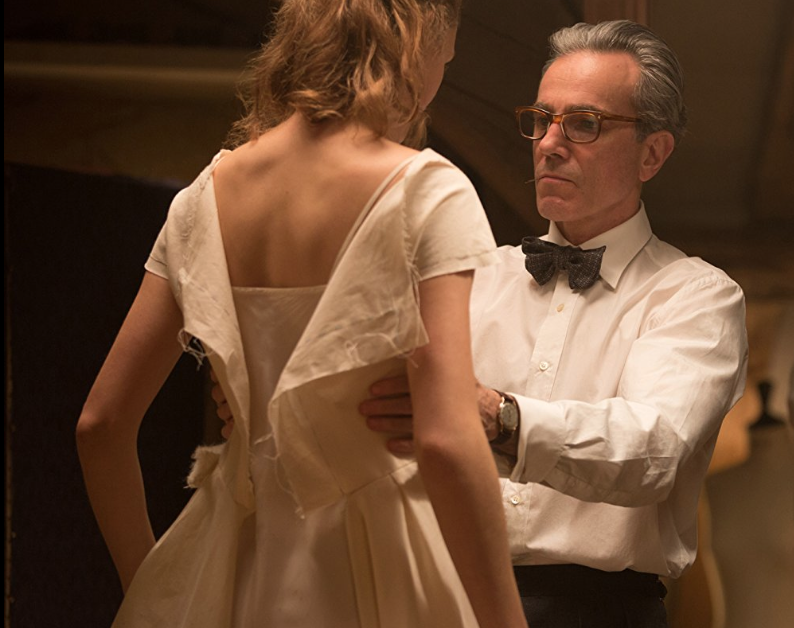 We are deep into Paul Thomas Anderson’s lushly opulent tale of a ‘50s relationship in England that’s sputtering. The young woman, who we first view as a clumsy waitress in a country inn, has fallen in love with a London fashion couturier. He’s made her his muse, his top model, and eventually, his wife. They’ve been invited to a New Year’s Eve party at the city’s notorious Chelsea Arts Club, though like most evenings he’s chosen to stay at home working. The club bash, like the rest of the movie, is set in the old money world of London high society at mid-century, and it’s a gala unlike anything you’ve witnessed.

Anderson’s 35mm camera is high up (with the director operating himself), tracking for all the world like a Max Ophüls eye-popper across an unending ballroom of extravagance—costumed revelers by the score, beautifully concocted floats plus a live elephant in full regalia, a blaring orchestra, the air bursting with champagne and balloons and confetti. Phantom Thread’s lead producer, Megan Ellison, probably spent more on this lurid display of wealth than readers of this journal will spend on their entire film output for the next year. (Phantom Thread’s budget was reportedly $35 million.)

We finally spot the one person who looks distressed and out of place in the cacophony of drunken revelry: Alma (Vicky Krieps). She’s being slowly weaned out of the daily agenda of the fashion house maestro, Reynolds Woodcock (Daniel Day-Lewis)—it appears he may be giving her the same short-run he’s given his previous models-of-the-moment. Alma’s trapped in the excess of a class she doesn’t fit into and has no desire to join.  And she’s rescued here from the Chelsea’s riotous doings by Woodcock himself, who’s come to return her to the sealed sanctuary of his made-to-measure and ever-proper townhouse.

The scene works.  We’re agitated just as Alma is, but we’re also held in awe by the decadent splendor of the scene. This is deep-pockets money up on the big screen, the kind of spare-no-expense production that Dino and Martha De Laurentiis, as well as Cubby and Barbara Broccoli,  pumped into their Hannibal thrillers and Bond epics. (Even Breakdown, Martha De Laurentiis’ 90s bare-bones indie cruncher, had a $36 million budget.)

Big money freely spent traditionally draws huge audiences to the multiplex. Megan Ellison is the most important new entrepreneur to challenge the status quo. Already a legend at 31, Ellison commands a well-publicized war chest estimated at two billion dollars. Her company, Annapurna Pictures, has financed Anderson’s The Master and Inherent Vice, David O. Russell’s American Hustle and Joy, Kathryn Bigelow’s Zero Dark Thirty and Detroit, Spike Jonze’s Her, and Bennett Miller’s Foxcatcher, Many of Ellison’s movies fall in the $30-40 million range. She must believe that “art cinema,” if it’s unfolding a great story with an open checkbook, can result in movies that look, sound and feel like must-see, end-destination events. While she hasn’t had much U.S. box office success with Anderson’s The Master ($16 million) or Inherent Vice ($8 million), true patrons of the arts never give up. Maybe Phantom Thread will bridge the vast gulf between the art house and the multiplex.

When Alva first ingratiates herself into the eloquent House of Woodcock, she seems fated to make the same mistakes as her predecessor—starting with scraping her breakfast toast much too loudly next to Reynolds, who’s doodling away on his sketch pad. (Anderson dials up the volume, more than once, to make sure everyone gets this.) At a festive dinner party of London swells, the one person we see engaging Alma is a young physician, and later, we eavesdrop on society matrons in another restaurant dismissing Reynold’s new muse as the hired help she’s become. Another vivid scene opens with one of the designer’s moneyed patrons, an elderly lush, disgracing herself at her own wedding dinner and passing out, her head falling into the main dish. Reynolds and Alma drive to the patron’s home in his ’55 Bristol 405 sedan, where she storms past servants upstairs into the bedroom of the fallen woman and pulls his exquisite creation over her blacked-out head… because in Alma’s view she no longer deserves to wear it. Touchy, touchy.

Reynolds’ worst fear is losing a customer base to other couturiers who are experimenting with less format evening attire. Woodcock detests “chic.” His insistence on sketching constantly seems forever in the way of their spending a quiet evening alone. So Alma dismisses the entire staff of Woodcock’s five-story townhouse in order to prepare and serve Reynolds a private meal—even though his sister and directrice of haute couture, Cyril (Leslie Manville) has warned her that “he doesn’t like surprises.” Cyril is the one voice that Reynolds listens to besides his own.  And, as always in a world in which one’s station in life defines everything else, Cyril is correct: Reynolds hates Alma’s asparagus and throws another of his increasingly vile hissy fits. “I don’t know what I’m doing here,” mutters the discouraged yet defiant Alma. We’ve cut Reynolds a lot of slack because, after all, he is the creative outfitter to the Royal Court, and also seems to be nursing a fixation on his deceased mother, but please.

Poor Alma looks like she’s going to be crushed not just by this mercurial fashion titan, but by the sheer opulence of the Ellison production, the gowns of the Oscar-winning costume designer, Mark Bridges, and Jonny Greenwood’s insistent score that insinuates Victor Young’s “My Foolish Heart” longer and more lovingly than you may ever have experienced that ‘49 ballad.

Other than her soft features, her boast that she can stand still longer than any model, and her breathtaking ease at wearing dresses made of silk, chiffon and even Flemish lace for ladies-of-leisure,  Alma has no marketable skills as an atelier, tailor or seamstress, and Reynolds evens questions her taste. “Maybe I like my own taste,” she counters, though her one goal in life, plainly stated, is “giving every piece of me” to this man. You may think you’re watching yet another domineering male/submissive female movie—but then Anderson begins unleashing his phantom surprises, and hoo boy, are they dillies. (No direct spoilers here).

You’re not prepared for what Alma does in this movie any more than you might have been if you were watching a crime drama back in the 40s that introduced the concept of females as femme fatales and even predators. The no-frills, black-and-white Out of the Past (1947, shown recently at the New York Film Festival as part of a 25-film Robert Mitchum retrospective) is a prime film noir example. Mitchum and Jane Greer, cast as the archetypal tough guy and his outwardly demure lover, gradually (and willingly) exchange roles. “I don’t want to die, but baby, I’m gonna die last,” is Mitchum’s last weak boast in that movie. There’s no sense of fashion in evidence, though Greer’s ready-to-wear dresses and Mitchum’s trench coat that always needs dry cleaning make their own style statements. But some of Out of the Past’s secret threads are stitched deep into the fabric of Anderson’s cliffhanger.

And make no mistake: Anderson’s writing and directorial excellence along with Ellison’s top-drawer production have fashioned a real cliffhanger for contemporary multiplex audiences. Will it play? In part, it depends how many Lewis fans come out to see the 60-year-old actor in what he’s said will be his final screen appearance. Lewis, who’s already won three Oscars as Best Actor, fully understands that Woodcock, like Christian Dior, was the perfect servant to the very rich, that his job was to create the world’s most beautiful dresses for the elite one-percent including ladies, princesses, countesses, duchesses and queens who weren’t remotely beautiful.

But maybe the success of Phantom Thread also depends on where it plays—indie theater or between two carpeted corridors each showing The Last Jedi. It’s a movie made for moviegoers who rarely set foot in an “art cinema,” as well as patrons of art cinemas who rarely venture into a multiplex with its sticky floors and overpriced tubs of smelly popcorn.  Phantom Thread opens December 25… a posh, artier-than-arty stocking stuffer that might be the perfect gift for your secret Santa who loves nothing better than a—night at the multiplex.