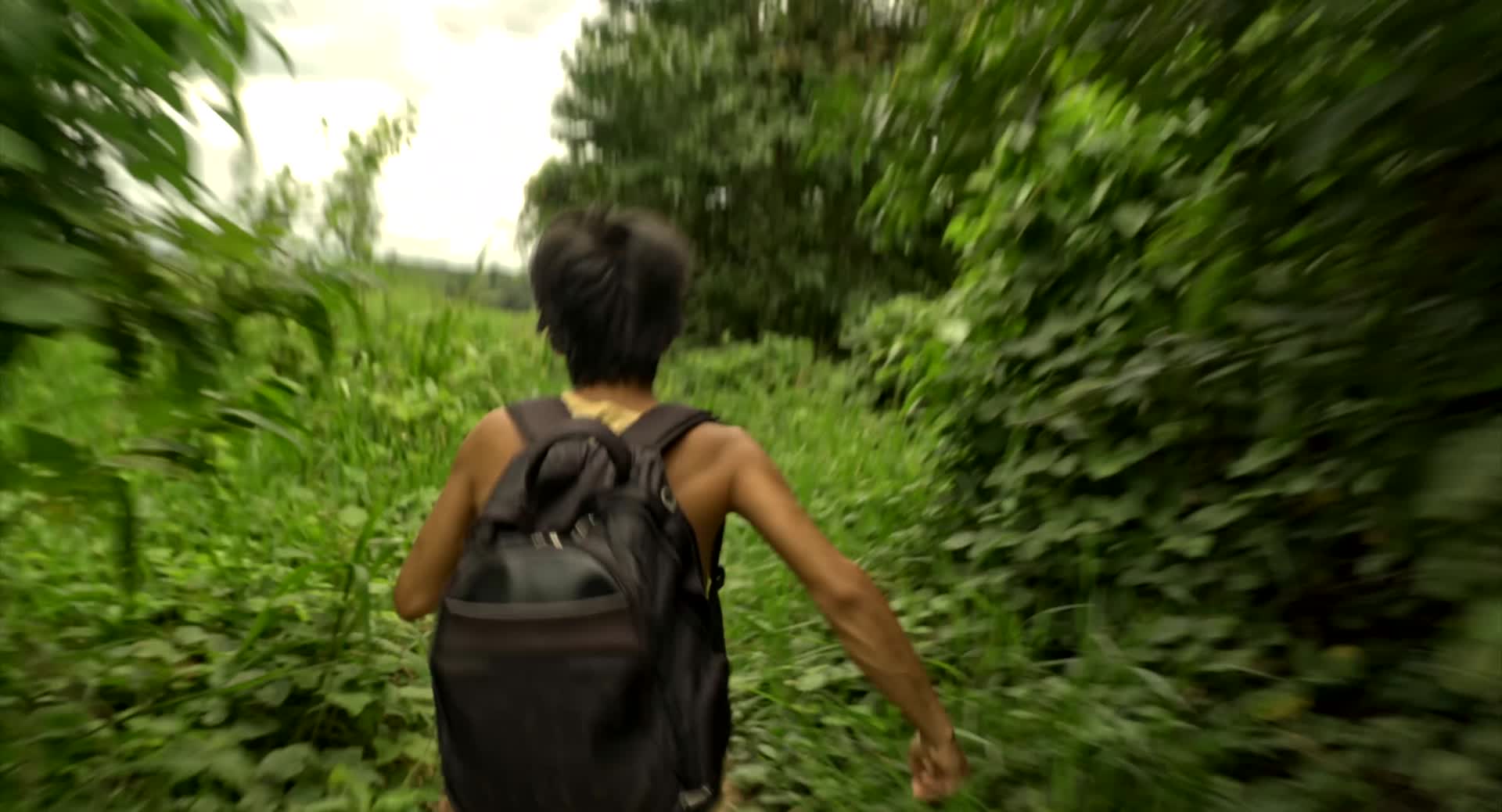 If you don’t instantly recognize the ‘supervisor’ of this splendid short, here’s a few choice snippets from his current Masterclass video pitch for what he calls his Rogue Film School:

“I’m talking to future filmmakers. I have come through all of this,  I have learned it all on my own, and I know something I can pass on. …I don’t use a storyboard,

I think it’s an instrument of the cowards.  …Hold the camera, look through the camera, don’t look at the flip screen. …Here is one book I would ask you to read (J.S. Baker’s ‘The Peregrine’) if you want to make films  …You spend way too much time in the film school, it costs way too much money. You can learn the essentials of filmmaking on your own within two weeks. …Young filmmakers come excitedly to me and say ‘look! I just shot 450 hours of film!’ and my heart sinks. We are not garbage collectors. We are filmmakers. We are thieves who get away with loot from the most beautiful and the most scary and the most spectacular places you can ever find.  …I’m Werner Herzog, and this is my master class.”

One of Herzog’s young alums, writer/producer/director/cinematographer/editor  Lazzaarotto, was selected last year to join Herzog in the Amazonian jungle to create his unusual concept (only his second professional short film), under his teacher’s mentorship.   Set in the traditional village of Palma Real, an Ese ‘Eja community of Peruvian natives, we follow the young Carlito (Carlito Tirira Meshi) as he packs a few belongings and bids his mother farewell.  “You are very different. It is no place for people like you,” she tells him without a trace of emotion.  Carlito steals a motorized boat and heads up river—but to where?

Lazzarotto’s subsequent reveal could have been shot anywhere, but its impact has a universality taking place in an indigenous jungle community not far from where Herzog shot his epic Fitzcarraldo in 1982.  As a Herzog protege, the director executes simply and directly, confident his basic Big Idea will play even bigger in its remote setting.  The best proof is that it made the cut as one of 63 Tribeca fest shorts out of 5,131 submissions.

O. Henry was among New Yorkers’ favorite storytellers at the beginning of the 20th century.  His timeless tales of travail, many set in the struggles of working class couples and families, often had melancholy twist endings.  The author called his audience “the four million,” and Manhattan was his “Baghdad on the Hudson.”  There was a tiny smile embedded in the tears shed by readers at the conclusion of many an O. Henry tale.

If you toned down, cropped or more discreetly blocked the sex scenes that inform the early minutes of The Neighbor’s Window (inspired by Diane Weipert’s The Living Room), you’d have a classic, perfectly formed short that writer/director/co-producer Marshall Curry could have easily made in the 1920s, 30s, 40s, 50s, 60s, 70s, 80s or 90s.

For audiences in 2019, the nightly antics and couplings of the newly installed couple across the street  (played by Juliana Canfield and Bret Leda) are the perfect viewing device to snoop on.  Hitchcock’s Rear Window established the premise in 1954, except what James Stewart was viewing through binoculars across an interior apartment building courtyard was Raymond Burr, who’d murdered his wife and  buried her under the building’s courtyard plantings.   (Not an O. Henry story, thank you, but another New Yorker, Cornell Woolrich).

Like many modern-day residents in urban high rises, the couple across the way in Marshall Curry’s short make love with the lights on, never pulling their shades, so initially they’re kind of fun for Alli (Maria Dizzia) to spy on. After all, she’s a tireless mom raising two small button-cute kids—she’s very pregnant with her third—and some of the fizz in her marriage to  nice guy show-biz producer Jacob (Greg Keller)  has started to fade.

Alli thinks the guy she’s watching is pretty hot. “Do you really think they’re getting off on this?” she asks Jacob.  “I really don’t think they care,” answers Jacob good-naturedly, though he becomes less than  thrilled when his wife starts spending her evenings glued to a set of binoculars.

Like Hitchcock, director Curry is more interested in studying the reactions of the spy (James Stewart and here Maria Drizzia) than in the activities they’re spying on.  Alli’s a voyeur, but she’s also an intelligent mom inelegantly trapped in the cocoon of a marriage that’s already feeling slightly stale, even with its potential vacation in the Catskills.   Greg Keller, who works at home “because the Skype signal’s better,” adroitly fulfills the thankless role of the guy she loves and married, maybe thinking this was the best she’d find.  It’s a vintage O.Henry setup.

Seasons pass. Their third child arrives.   Alli nurses her baby by moonlight, watching, watching.   She and Jacob rarely go out as a couple, but that couple across the way keeps carrying on and hosting parties full of young, well-dressed millennials.  Years pass.  Alli and Jacob’s toddlers are suddenly little people who go off exploring the Museum of Natural History.  But is this oddly absorbing movie ever going anywhere?

Then, gradually, it does…and it wouldn’t be even remotely fair to tell you what happens across the street, except events shift into a scenario you never, ever expected.  There is a denouement, and then an epilogue, that are so O.Henry you will weep with gratitude.  The Neighbors’ Window is easily the best narrative short shown at Tribeca 2019, and Marshall Curry—who received a third Oscar nomination in 2018 for his riveting 8-minute documentary, A Night At The Garden—maybe just needed to switch formats to win one.

Portraits of Sally Hemings and Thomas Jefferson, subjects of interest in The History of White People in America: These American Truths

Last year’s Tribeca shorts introduced viewers to a nine minute “pilot episode” of a planned 15-episode animated racial history.  The concept was demonstrating “how skin became color, color became race, race became power,” from the 17th through the 21st centuries. The six directors above have stayed the writers,  art directors,animators, vocalists and co-producers.

This 5th episode, clocking in at a mere four minutes, earns its coveted spot in Tribeca’s 2019 fest by diving fearlessly into the hotly debated issue whether President Thomas Jefferson, following his wife’s death, took up with an African-American maid and domestic servant in Jefferson’s household (Sally Hemings), and fathered at least six children.  Sally began giving birth at age 17, in the late 1700s through the early 1800s.

While Jefferson eventually freed all of Hemings’ children, he didn’t grant freedom to any other enslaved family unit.  DNA links plus written and oral accounts indicate Jefferson may have fathered at least one (and possibly all) of these ‘love children,’ but other learned accounts maintain that Thomas and Sally had only a casual relationship, and that Randolph Jefferson, the president’s younger brother, was the more likely father.

Clementine Briand and her team take the position that Thomas Jefferson fathered all Sally’s children, who became the third enslaved generation born from African women and English men.  The animators’ formal black-and-white etchings illustrate the first grown son, Eston, and his mother mourning Jefferson’s death in 1826, with Sally giving Eston a book by the president,  Notes on a State of Virginia.

Jefferson writes that “the first difference which strikes us is a difference of color…the difference is fixed in nature.”  He goes on to ask whether this difference is of no importance—“Is it not the foundation of a greater or less share of beauty in the two races…Are they not the expressions of every passion in the color white, (which are) preferable to the eternal monotony, that immovable veil of black which covers all the emotions of the other race?”

Jefferson’s comparisons of  blacks and whites get very specific and very nasty, and Briand’s drawings furrow with agitation, zig-zagging titles, darkening shadows. In imagination, writes the president, blacks are “dull,” “tasteless” and “anomalous,” and the titles zap the screen.   They’re illustrating a racist screed that will conclude with Jefferson’s recommendation that all blacks should be relocated to the slave coast of Africa.

Here’s a friendly tip to any filmmaker looking to get a short into a major festival worldwide:  Try to get one—just one—recognized professional involved in your production. As you’ve read above, Quentin Lazzorotto lucked out by taking Werner Herzog’s Master Class and ending up having Herzog himself supervising his eight-minute Carlito Leaves Forever in the jungles of Peru.

At the 2017  New York Film Festival, Kevin Wilson, Jr.’s superb short film on the 1955 murder of 14-year-old  Emmett Till, My Nephew Emmett, was mentored and supervised on its Mississippi field location  by Wilson’s NYU professor and film teacher, Spike Lee.  The short won an Oscar nomination.  Jean de Meuron, a former student of this viewer at The New School, co-produced Timo von Gunten’s La Femme et le TGV, (The Railroad Lady), a touching, Oscar-nominated tale of a chance romance between a baker (Jane Birkin) and a passing train driver.

Having a real pro onboard will help ensure your film is better acted, better produced, or even has a better look.  Exhibit A of the last quality is Carol Dysinger’s  portrait of life in Kabul, Afghanistan, at the Skateistan Schoolhouse and Skatepark.  Since its founding in 2008, Skateistan been entirely run by Afghans and has served over 4,000 girls and almost as many boys, supported by the international skateboarding community.

Dysinger’s cinematographer was Lisa Rinzler,  who shot Hitchcock/Truffaut for Kent Jones, Don’t Blink – Robert Frank for Diane Israel, No Direction Home: Bob Dylan for Martin Scorsese.  She’s a two-time Emmy Award winner (Soul of a Man) and nominee (Silence in the House of God), and was  DP on Menace II Society, Dead Presidents, Trees Lounge, Pollack, and Three Seasons (1999), the latter being the first indie feature shot in Vietnam.

In Dysinger’s  Kabul doc, from its first  harrowing minutes in the capital city’s ruined streets, we sense we’re still in a vulnerable warzone.  So do the eight- to 12-year-old girls filing into the school after being searched.  They define “courage” as the sheer act of making it to school without incident.  They’re from poor homes with strict and ultra conservative parents; most can’t read or write; and many spent their early childhoods selling chewing gum or tea in a Kabul bazaar.  Yet they’re eager and ready to learn life skills, math, reading and writing the Persian language Dari…and, especially, how to skateboard.

One by one, the girls learn to stand, to push off, to turn their boards, to attempt an incline, to tik-tak (control the board), to skate the ramp.  It’s an indoor, protected space away from street harassments,  weekly explosions, even kidnappings which in Afghanistan dishonor the family.  Everyone fears the possible return of the Taliban, though it formally fell 17 years ago.

Rinzler often shoots tight and the girls respond without hesitation or camera consciousness.  They’re obviously comfortable with her.  In this leisurely, smoothly fashioned documentary that could have been stretched to feature length but wisely stays at a trim 39 minutes, we watch a courageous band of females—patient teachers and unafraid girls—learning how to make a sentence the same day they learn how to make a heel flip on a board.