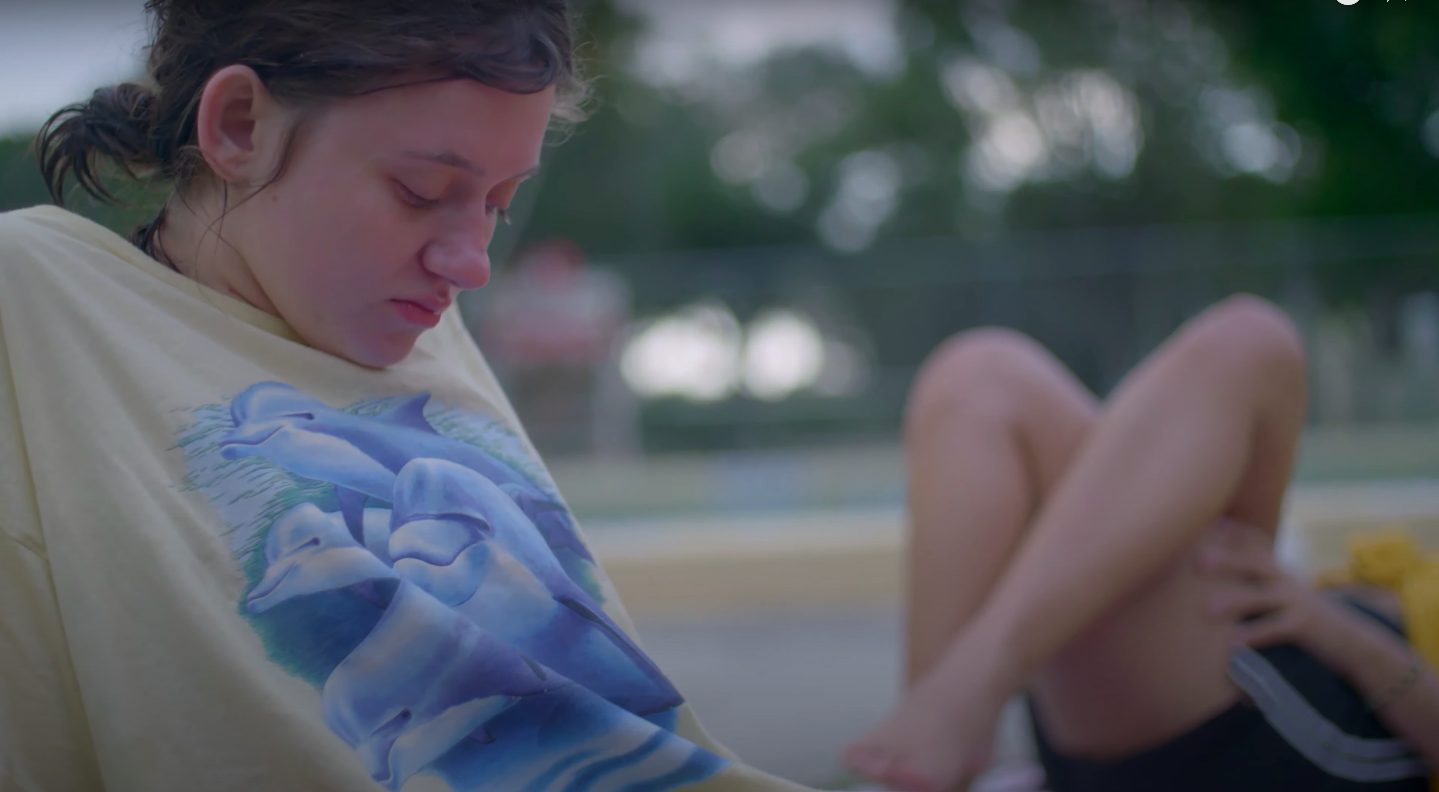 Joanna sits by herself, distanced from her camp friends. Screencap from "Fairchild" (2020)

Fairchild (2020) opens with a scene of camp kids crowded around their male counselor as he demonstrates the proper way to gut and clean a fish. “Now what you’re going to do is place your hand firmly on the belly area-” his instructions overlap as teenagers dare each other to force two dead fish to kiss. They point out sexual organs as the counselor drags a knife through the spine. Another scene flashes of discarded innards and guts laid out on a table. “Then dig in for all of those guts,” he instructs them. This scene is just one of the many visual cues and metaphors that alludes to the more sinister act of sexual assault in Kali Kahn’s debut short film, Fairchild.

Kahn is a filmmaker from Miami, Florida, who has thought a lot about how society shapes the conversations around the culture of sexual assault. As a survivor herself, she is interested in emotionally deconstructing sexual trauma in film by giving weight to the circumstances leading up to the act rather than just the act itself. She accomplishes this by capturing the lingering effects of an adolescent’s grief through a female-directed gaze. Fairchild is a 9-minute long experimental short film about a 15-year-old’s fragmented accounts of her assault by her adult male camp counselor. Kahn says that the film was intended to be a ‘visual vocabulary’ or emotional utility for survivors of sexual trauma. The cinematography, as well as the sound design, drives home the message of the story and leaves the viewer with an unsettling bystander effect. In 2018, the short film was commissioned by a non-profit film festival. It was later greenlit by a panel of only women. Fairchild premiered on NoBudge, an online platform that features low-budget short films and it can also be watched on Youtube. 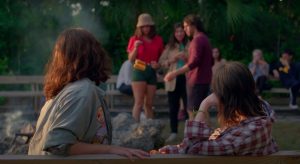 Joanna and a friend watch the counselor interact with other campers. Screencap from “Fairchild” (2020)

Films that deal with sensitive topics such as abuse of power have an ability unlike any other narrative because they have the power to either harm or empower their audiences. The filmmaker’s framing of these traumatic events, and whether or not the audience is meant to see themselves as a victim, perpetrator or bystander, is what we understand as the gaze in film. These distinctions in the direction are what guide the audience to understand the tone and elicit the emotional response that the filmmaker is counting on. For survivors of abuse, there’s a concern that these topics are becoming glamorized or robbed of their nuances. In Emerald Fennell’s 2020 feature Promising Young Woman, the female protagonist’s assault is the driving conflict that she must grapple with. It incentivizes her to reclaim her agency, however this is achieved through acts of violence that parallel the aggression of her assault. For many survivors who watch the film, the scenes of the attack feel explicit and overzealous. There is a suggestion of a male gaze in the way these scenes are shot that can alienate survivors and prioritize the entertainment value. It begs the question: just how necessary is it for audiences to watch a character be violated in order to relate to them and have us root for their justice? Whether it be for entertainment or shock value–vindication or reclamation, these are feelings centered around incidents of generational and cultural abuse and they demand respect and context. Hollywood has a history of succumbing to the violence, forcing audiences to watch these scenes through the lenses of abusers who commit them. As independent film enthusiasts and creators, we should be allying with the lived experiences of survivors and giving more grace to the filmmakers who wish to expand the boundaries of these representations.

Fairchild is a non-linear journey that follows Joanna (Tef Baker) through a sensory unraveling of her trauma. Though we never see the assault occur within the film, there is an overbearing sense of tension that never resolves itself. This foreboding feeling is achieved by the splicing of scenes together that show the brunette in a state of shock and distress. In one frame she’s pressing her fingers over a fresh mosquito bite, scratching the blood of it into her skin. Then the camera switches back to the background of her environment, focusing on her friends in their swimsuits, applying sunscreen to each other’s backs and shoulders. Another scene brings us back to the teens attempting to win a pool race by fighting dirty. Joanna’s friend grabs her leg to drag her underwater, and the frame gets notably smaller, shrinking into the center and emitting a high-pitched tone. Kahn represents these scenes as performances of girlhood through the confusion these girls are experiencing while navigating the maze of female friendships within a patriarchal culture. In a pinnacle scene, Joanna is putting on eyeshadow to look nice for the counselor while her same-aged camp friends are talking about witnessing him getting a blow job from another girl. They trade insults and make fun of each other as they finish their makeup, “you still look twelve,” her friend jabs. There’s a sharpness and a roughness that borders their femininity; their sexual naivety is masked by their enthusiasm to join the ranks of an untapped world. 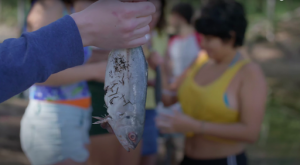 The fish the campers are about to cook. Screencap from “Fairchild” 2020.

Fairchild’s cinematography is voyeuristic, moving the camera outward as if a bystander or inward as if a perpetrator. Fish act as a visual motif for much of the 9 minutes of the film. Throughout the short, out-of-focus shots of fish appear; the camera centers them in the action. In life, men often frame their advances towards women as a process of catch and a release. The woman embodies that which is being captured and later skinned for the consumption of the male ego. Fairchild makes several references to men as animals and predators. The animalistic texture to the way the men and the teens act is conveyed through shots of kids hungrily biting into their burgers before the gaze eventually transitions to a scene where the protagonist is sitting alone by the fire, a visual symbol of prey.

Kahn’s choice to not show the protagonist’s assault was intentional; it was meant to subvert the expectations of the viewer. Through design and technique, there is a nuance and an artistry that implies the violence instead of showing it outright. Kahn employs sound to curate the emotional tone of the film. The mosquito-like ringing utilized in the audio design is disorienting. It spikes fear into each of the shots, especially when paired with the visual manipulation of the size of each frame. But nothing is more effective in producing uneasiness than the scene that symbolizes the act of assault itself. The audio plays an important role in portraying the invasive nature of the event, specifically, how it seems to swarm like a hoard of bees until reaching its crescendo. The animal-like cries, rustles, and gasps play out against the image of an iguana’s pulsating neon skin. As the reptile breathes in and out, the audio gradually becomes louder and as the sound gets louder, the frame morphs in size again. This time, it expands, suffocating the screen. Then the focus shifts to show Joanna once more. The girl sobs into her arm, experiencing a full panic attack alone in the woods. At the same time, the man who groomed and assaulted her is somewhere reacclimating himself to his position of power and authority within the camp troupe. In one of the final scenes, a smirking teen approaches Joanna. He asks the brunette what her “orgasm face looks like,” and in a final act of degradation, slaps her across her cheek with a dead fish.

Fairchild unravels with a disquieting pace. Kali Kahn’s 9-minute short testifies to the trauma that many have suffered. It archives all of the emotional impacts of assault through lingering psychological effects, allowing for a process of reflection for victims and bystanders. Her artistic sentimentality captures the authenticity and realism of both everyday sexism and violent assault with techniques of design and visual metaphor. Society’s willingness for violence, both indirect or direct, is embedded within adolescence, and Fairchild is a film that reimagines the messages of society by conveying the pervasion and animalistic nature of our victim-blaming culture.