An Interview with Michael Tucker 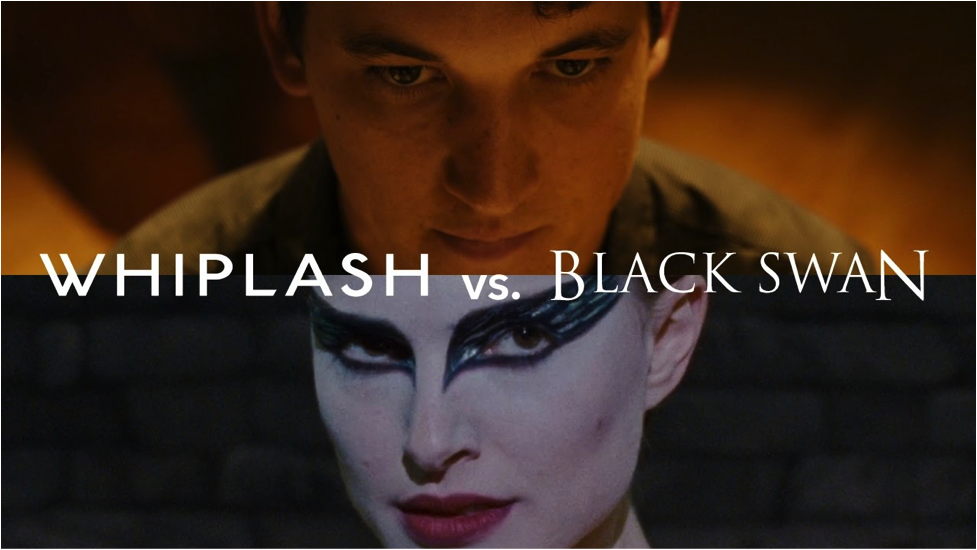 When Michael Tucker began his YouTube channel in 2016, he hoped that it would be a resource for him and his viewers to analyze films and develop personal skills, but he never anticipated just how wide of an audience his videos would reach.

The LFTS channel on YouTube has reached over 1 million subscribers.

Lessons From the Screenplay (LFTS) is a YouTube video essay series that examines the writing techniques and structures of famous films. The essays pull from academic sources and heavy research to identify what works in the film and what doesn’t. With a following of over 1.3 million subscribers and videos with over 6 million views, the channel acts as both a resource for young filmmakers and a community forum where film lovers can dissect and discuss their favorite films.

Before starting LFTS, Tucker had prior experience working both on YouTube and within the film industry as a documentary editor. After moving to LA to write and direct, he started a channel with his friends called Finite Films, where they would post a new short every month. Due to a lack of financial success, they stopped the channel after a year. When another one of his projects fell through, he decided it was time for him to branch out and create his own work. Combining both his experience on YouTube and with film, he started LFTS in 2016.

Much of the constructive criticism Tucker received regarding his work as a filmmaker seemed to be specific to his screenwriting, something that Tucker believes is a result of his preference for directing. “The directing and the ideas for stories were very clever but the actual screenwriting part of my work was lacking,” says Tucker. He decided to start his channel because he saw it as a way to hone his skills as a writer while also sharing that process with others.

“It was this kind of perfect storm of being excited about this new format and also serving my personal creative goals,” says Tucker. “That’s kind of how the channel was born…as a way to force myself to learn and relearn more about writing and to hopefully be able to share that along the way.”

In the past decade, video essays have become extremely popular on the YouTube platform. A Google search reveals that in 2011, around 11,800 videos related to the topic of the video essay were posted to YouTube. For comparison, so far in 2021, the same search brings up over 5 million videos related to this topic.

The Lessons from the Screenplay channel on YouTube provides video essays on famous screenplays.

Tucker’s channel is one of many channels specializing in video essays that has reached over 1 million subscribers, demonstrating the niche but large audience that seeks out these kinds of videos. In addition to Lessons from The Screenplay, channels like The Take, Nerdwriter, Every Frame a Painting, and Pop Culture Detective all specialize in film analysis video essays, and all of these channels have over a million followers.

Though it’s hard to identify what led to the explosive popularity of the video essay, Tucker believes people are drawn to this format because of its ability to combine education and entertainment, teaching viewers how to better their skills while keeping them engaged. “What’s cool about the video essay is that it can very efficiently highlight what’s so great about movies because you’re in the exact same medium,” says Tucker. “That’s something that I definitely try to do with Lessons From the Screenplay…explain something of value to people so that they’re learning, but ideally also telling the story of the movie and recreating a little bit of that experience.”

This is the magic of the video essay. Written essays can often feel too academic or try to explain a visual via written language, but the video essay allows viewers to educate themselves by watching a visual medium without the feeling that it’s studying.

For Tucker, it was important for LFTS to work within this middle ground between academia and entertainment to provide a more accessible learning experience. Often with scholarly work and rhetoric, it can be hard both to understand the language and find the willpower to even try.

“It was kind of also looking at film school Michael and asking, like, what do I wish I had had while I was at film school?” says Tucker. “I think I was missing something that made it clear why writing was so important and also could make the process of writing more accessible.” 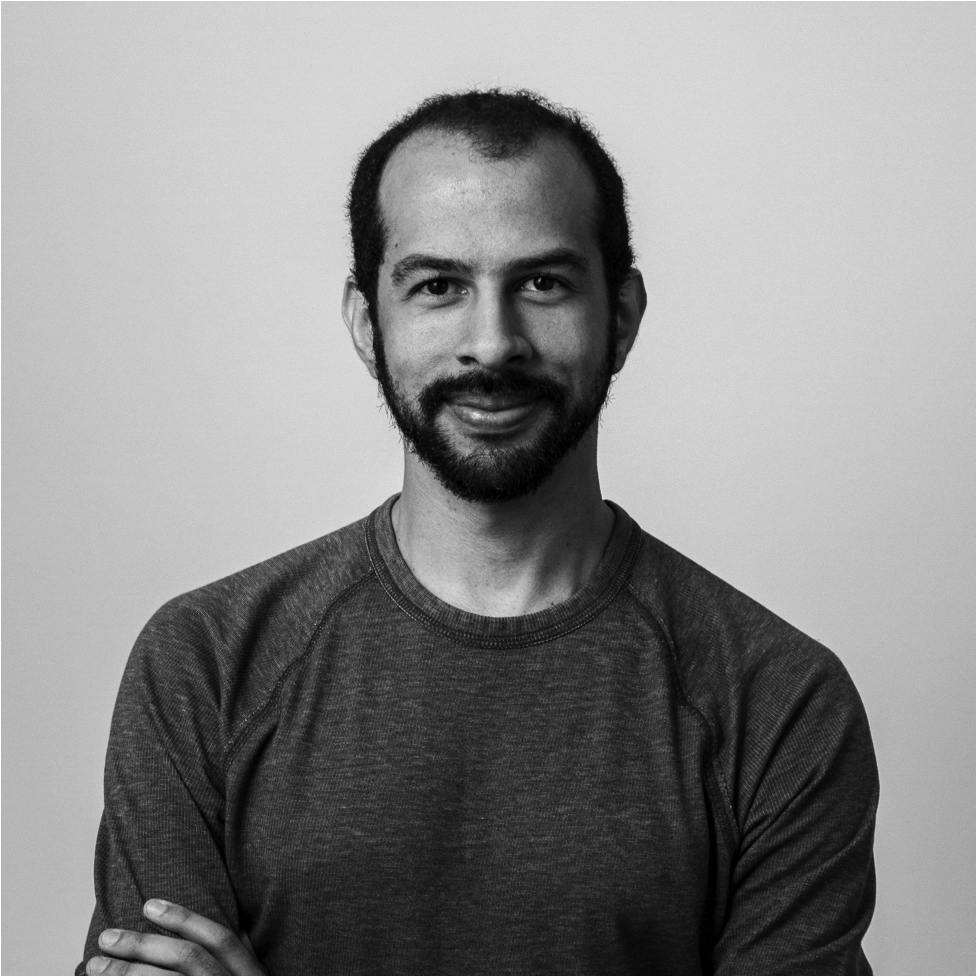 Michael Tucker started LFTS when he noticed a lack of content on screenplay writing. (courtesy of LFTS website.)

LFTS helps bridge this accessibility gap by explaining script-writing techniques and pulling from academic texts while maintaining an entertaining and casual tone.

Not only did Tucker choose to focus on writing as a way to develop his and his audiences skills, but also because there seemed to be a general lack of content surrounding screenplay writing. While there are a variety of film-oriented video essay channels on YouTube, many of them discuss opinions or directorial and cinematographic choices; they fail to mention the writing.

Tucker saw this as a serendipitous opportunity to create a channel that both stands out in its own niche and aligns with his intended creative goals. “I think it was noticing this missing part where no one was talking about screenwriting, and wanting to, for myself and for other filmmakers, see if I could point out why screenwriting is so important.”

Tucker’s very first video on Gone Girl reached 8,000 views in a week. Today, that video has reached over two million views and counting. With a great deal of success on his first few videos, LFTS was quick to blow up. On average, Tucker’s videos receive anywhere between 300,000 to a million views. 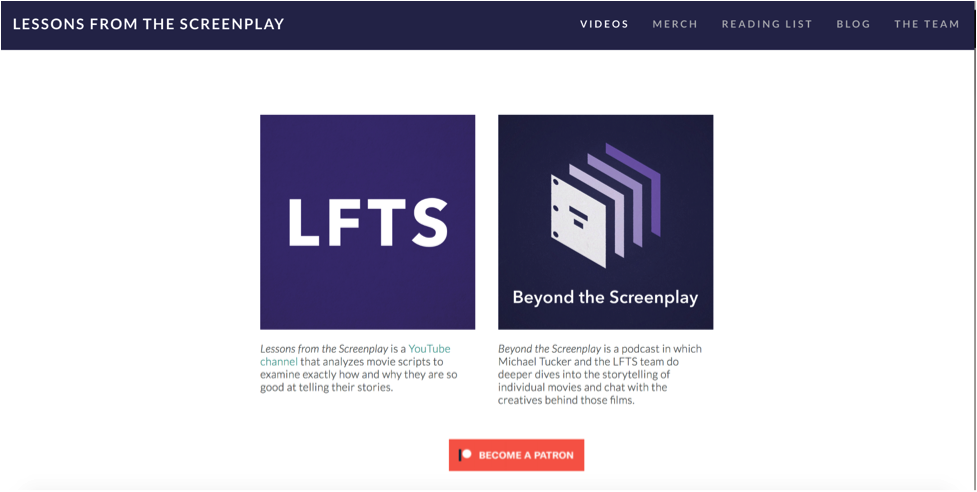 Lessons from the Screenplay also has its own website with links to the videos as well as reading lists.

While Tucker admits there is a great deal of pressure that comes with regularly making videos for such a large audience, the YouTuber has found balance through his team and friends, both in the sense that they can physically help him with the workload, and mentally help him to remember that he is always his own biggest critic.

“The first year, it was still new and fun enough that it was okay, but I think the second year is where I started to feel burnout,” says Tucker. “Luckily I have friends and family to remind me that it’s not as dire as you think it is.” After working through his burnout and realizing those close to him wouldn’t abandon him, Tucker realized that “people aren’t judging your work as hard as you are.”

As a life-long cinephile with a continuous desire to share and discuss film knowledge and discourse, Tucker continues to create a space through his channel for movie lovers, whether that be to learn, or to simply connect with others over a shared passion.