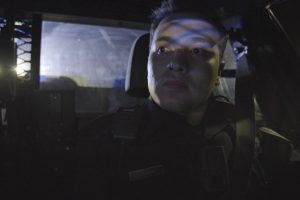 Peter Nicks is on our 10 filmmaker to watch list in 2017 for his film, The Force, a cinema vérité look into the Oakland Police Department from 2014-2016. Nicks had hoped to capture the department emerging out from federal oversight, only to document another scandal. The film is part of a thematic trilogy about institutions and communities in Oakland, California.