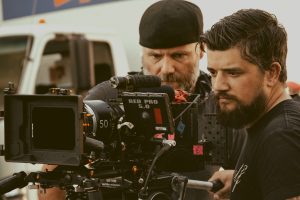 In 2011, Evan Glodell and Joel Hodge partnered up to make the film Bellflower, with Glodell writing, directing and acting, and Hodge working as DP. With a budget of about $17,000, the film became acclaimed for its stunning action-packed cinematography, resulting from their own hand-made camera built exclusively for the film. Now, Glodell and Hodge make The Independent’s 10 Filmmakers to Watch list for their upcoming feature Chuck Hank and the San Diego Twins.