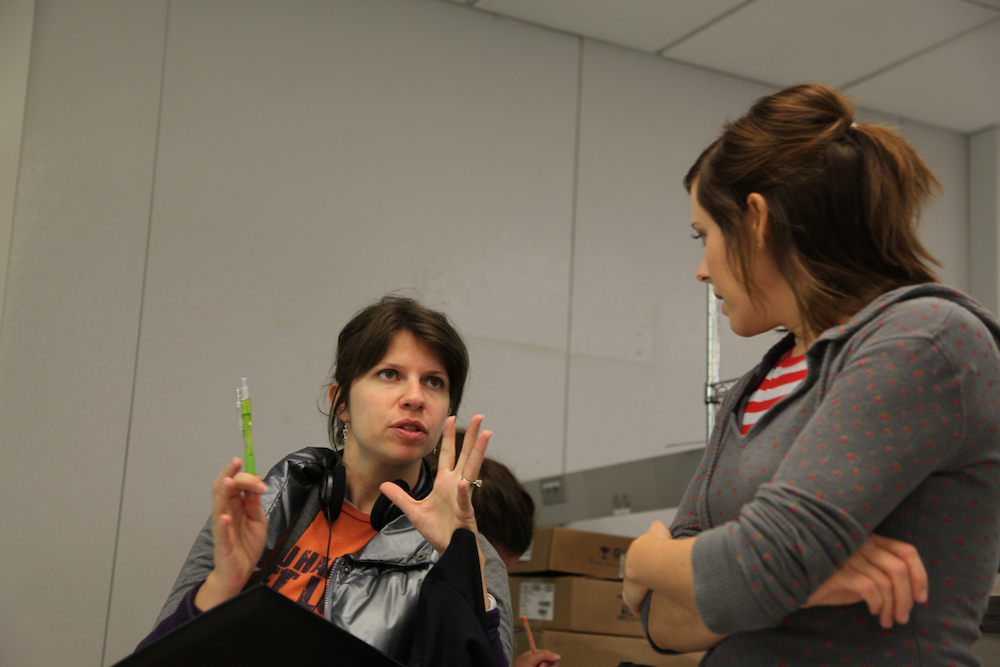 In my first two installments of my Film Journal for The Independent, I wrote about the philosophy behind the $200,000 independent film. In this installment, I will talk about laying the groundwork to make our film at this budget, the period known as pre-production, and how the making of Losing Control reinforced the film’s theme that faith is more valuable than proof.

It is no exaggeration that film financing is hard, especially in this economic environment, but making a $200,000 feature with over 15 major locations, 40 speaking roles, driving scenes, and singing in a foreign language requires a huge leap of faith. Most of the producers I interviewed for Losing Control had similar first reactions: “cut the number of locations, cut the number of roles, and lose 10 pages.” Having lived with this story for so long, I was far too attached to it to be told to cut anything. Luckily, producer Matt Medlin came along, and he was the perfect combination of optimism and pragmatism. Having just produced a feature film in the same budget range called Obselidia, (which just got into the 2010 Sundance Film Festival at the time of this writing), Matt knew intimately what could be accomplished with a little money and a lot of passion.

Our other key hire in pre-production was casting director and producer Alyssa Weisberg, whose credits include Star Trek (for which she won an Artios Award), Cloverfield, and Lost. Alyssa fell in love with the script years ago, and despite a drastic change in budget, never lost her belief in Losing Control.

Because of Alyssa’s stellar reputation in Hollywood, tenacity, and vision, we secured a phenomenal cast. Due to our schedule and budget constraints, we had just six weeks to cast 40 roles – and Alyssa hand-picked the best actors to read for every role from the leads to the dayplayers. There were countless nights when Alyssa would stay up until 4 am perusing her files for every Chinese actor in Hollywood who fit the very specific needs of our Chen Wa character. In several cases, Alyssa personally coached these actors before they even read for me. Her ability to absorb a director’s vision, and translate it into the perfect pool of candidates, is why she is one of the top casting directors in Hollywood.

And without our lead, Miranda Kent, this incredible cast would have no one to support. I have told Miranda this many times – that there was no film until I found her. In fact, the entire circumstances around our meeting could only be attributed to fate.

The lead role of Sam was a clear character in my head, but until I happened to catch a few minutes of the Curb Your Enthusiasm-esque show, Campus Ladies, I had never seen an actress embody all the contradictions and idiosyncrasies of my main character. There was my Sam embodied by this cute blonde woman who could at once be smart yet naive, optimistic yet skeptical, and free-spirited yet neurotic. A real woman full of paradoxical behavior – someone I could relate to and someone I wanted to watch.

The next day, I was getting my hair cut, and I mentioned that I had just seen Campus Ladies; my hairstylist said that his friend was on the show. When I asked which one, I couldn’t believe that it was the blonde who I had fallen in love with the day before – a woman named Miranda Kent. My hairstylist set up a meeting for us, and we instantly connected. Subsequently, Miranda read the role of Sam in a table read, and with no direction, nailed it. She was so in tune with this character and is such a comedically gifted, sensitive actor that all her choices were exactly what I was looking for. At that moment, I knew that if I could raise the money, I had a successful movie if Miranda played the lead.

While we were casting the other roles in the afternoons, Miranda was hard at work, immersing herself in the role of Sam. She changed her hair color and style, visited biology laboratories with me, learned scientific techniques, interviewed scientists and we had hours and hours of long conversations about Sam’s emotional arc in the film.

Once casting was under way, we turned our attention to location scouting, which is probably the hardest part of producing an independent film in this budget range. There were several critical locations that posed big challenges. The first was a laboratory. We needed to find a laboratory that was empty so that we could shoot without interrupting ongoing experiments and that would let us shoot for the five days that our schedule required. I thought this would be an easy thing for me to secure because of my background as a scientist, but most of my colleagues are in academia and have labs at universities. Several of my colleagues at USC and UCLA were open to us shooting for free in their labs, but what we didn’t know is that the universities charge a minimum of $6,000 per day just to shoot on campus. This was incredibly deflating, especially since the film centers around Sam‘s laboratory.

Once I realized that the prohibitive factor would be the cost of the university, I decided to explore shooting in the private sector, such as a biotech company. I did not have any relationships in biotech on the west coast, but I had an idea. When I was at Harvard, I used to go to networking nights hosted by the Massachusetts Biotechnology Council. There had to be a group similar to that in Los Angeles. And in fact, there is. It’s called SoCalBio, and is led by an incredible man named Ahmed Enany. I called Ahmed on a Friday afternoon, and on Monday, we secured an incredible facility called Xencor, which happened to be vacating its top floor at the time we were scheduled to shoot. This company allowed us to shoot for free and welcomed us with more than open arms; we are incredibly grateful to them and their incredible team.

After securing our first, and most critical, location, it was time to assemble the rest of our creative team. First, I turned my attention to choosing a cinematographer for our project. This was perhaps the most agonizing decision of all during pre-production, and very much a battle between my heart and my head. At this budget, there seem to be two tiers of cinematographers who can afford to work on a project such as Losing Control this. At one end of the spectrum, there are veterans who have shot many, many films and television shows and have made enough money in their careers that salary is not a deciding factor, and at the other end are young, hungry cinematographers who are dying to direct features no matter what the rate. I had to pick between the two, and it was extremely difficult.

On the one hand, a veteran DP would be able to help me when I was unsure of where to put the camera, but on the other hand, a young DP would share my passion for the project and put as much of himself or herself into the film as I would. I had just finished directing a pilot called In The Mix and had worked with a young cinematographer named Jamie Urman, who had graduated from the American Film Institute (AFI) a few years before. Jamie and I met when he was right out of school and looking to shoot anything. I had a short no-budget film called Big Trouble, for which I needed a cinematographer, and Jamie shot it with no lighting or grip equipment…just him, the actors and me working as a tight-knit collaborative team. It looked great, cost $25 and was one of the most fun experiences I’d ever had making a film. From the moment I met Jamie, he made me laugh really hard and found the same situations funny that I did. He was the ideal collaborator, but he had never shot a feature before. One morning while at breakfast with my mentor, six-time Emmy-nominated director Will Mackenzie (Scrubs, Reba, Everybody Loves Raymond), I lamented about what a hard decision picking a DP was…shouldn’t I hire someone really experienced and who would move lightning fast during our ambitious schedule? Will asked me why I wanted to do that when I lit up every time I talked about Jamie? In my heart, I knew that I wanted to make my film, a comedy, with someone who would consistently make me laugh…even when the challenges of pre-production made me want to cry.

The same faith and good will that helped me assemble these key players trickled down in all our hiring – from department heads to interns. I was amazed on the first day of principal photography when I showed up at our laboratory location to see that our cast and crew numbered more than 50 people! I was even more moved that each and every one of them was willing to work extremely hard, long hours, because of their faith in Losing Control.