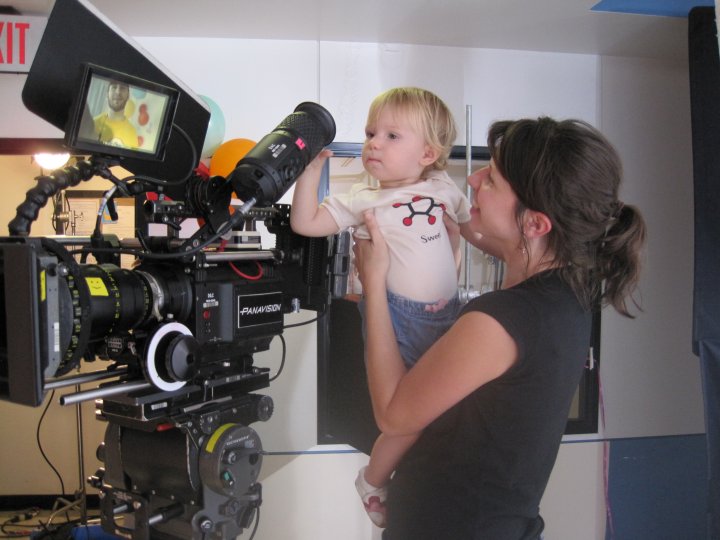 In my last installment of my film journal, I wrote about the importance of pre-production for laying the groundwork for principal photography. What I learned during principal photography was that no matter how much you prepare, how long you plan, things will change—locations fall through, actors’ availabilities shift, and you need to continue pre-production into the phase of production…even when you are already working 12- and 14-hour days.

Our production schedule was six days on and two days off. We shot 19 days in Los Angeles and four days in Boston—a total of 23 days. We shot from the period of October 12th through November 16, 2009, so as you can guess, there was not much time to rest between shoot days. We went to Boston five days after wrapping in LA, so much of our prepping was happening as we went. An important lesson that I learned during the making of Losing Control was that no matter how much work there is to do on your days off (location scouting for the aforementioned locations that fell through, shot-listing, rehearsing, etc.), it is critical to take one complete day off a week for family time. This is an incredible challenge when there is so much to plan and there is never enough prep, but without the chance to recharge, it is impossible to be as present as a director needs to be when you’re shooting. And, even though there are dozens of people working on your set who are dedicated and doing a great job, there is only one director who is looking out to make sure everything adds up to a complete and total vision. That said, as both director and producer, the biggest, most critical challenge for me, was to turn off my producer brain while shooting and remain 100 percent focused on how my story was being told.

In my last installment, I gave great applause to my producer, Matthew Medlin, who also absorbed much of the production stress while we were shooting, and in this installment, I need to credit my incredible 1st AD and co-producer Nick Harvard for running our set so well. Nick had worked as a 2nd AD on The Hurt Locker, and was extremely experienced and organized. I used to call Nick my “set husband” because, on set, I talked to him more than to anyone else. Through Nick, I would communicate with my cinematographer, art department, costume designer and everyone else except my actors, to whom I spoke directly. Having never had an experienced AD before, this was a revelation for me; I never realized how much energy is spent answering questions and talking to so many people. This energy could now be invaluably redirected towards being as present and available for my actors as I needed to be. In addition, Nick knew all of my shots, and took on the stress of making sure we’d get them all by the time we wrapped. On an indie production, there is no chance of going back to a location, or letting your schedule run over by a day. There were many days where we had to have excruciating conversations about what we might lose, but Nick always made sure we got what we needed.

Because of the sanctuary Nick helped create on set, I got to really play with my actors. In my last film journal, I talked about how talented our lead actor Miranda Kent is; in addition to her many gifts as an actress, she’s also extremely experienced at improv, having been a regular on the unscripted series Campus Ladies, produced by Cheryl Hines (Curb Your Enthusiasm). Miranda was excellent at sticking to the script, but also deviating from it when asked. And our entire supporting cast was extremely gifted at working this way: Theo Alexander, Sam Ball, John Billingsley, Barry Gordon, Neil Hopkins, Steve Howey, Kathleen Robertson, Reid Scott, Lin Shaye, Bitsie Tulloch, Alanna Ubach, Ben Weber, and Jamison Yang were all amazing and people consistently comment how awesome and full our supporting cast is. Generally, we’d do a scene as scripted and then after the first couple of takes, we’d loosen things up a bit and let the actors improvise, especially at the end of a scene. I loved this way of working and it enabled our actors, who were so carefully cast in this film for their personalities as much as their ability, to really let themselves and their brands of humor shine through. I loved working with each and every one of them, and it was heartbreaking when we wrapped.

Production was amazing, but not without its lack of sleep (average of four hours a night), its stress (changing locations every day for our last week of shooting), and its utter frustration (occasionally losing footage from testy hard drives). An additional saving grace of this experience was my husband, and one of our producers, Rob Johnson. Rob cared for our one-year-old daughter during this time, as well as made sure to send me text messages full of wisdom each day on set. Somehow, he intuited what I needed to hear most that day (Have fun and enjoy the process; Focus on the details; Make YOUR movie), or whatever I was struggling with at the time. Making Losing Control was tough on our daughter, who was missing her mommy terribly. She would wake up in the middle of the night screaming for me, and need to come in our bed. Several nights Rob would go into her room and let her sleep on his chest so that I could get a good night sleep. Directing is hard enough without feeling bad about being absent from your family…I don’t know what I would have done without Rob’s support and unconditional love.

Just to add a layer of complexity and stress to our production schedule, we needed to head to Boston just five days after wrapping our LA shoot. The movie is set at Harvard Medical School, and Boston is definitely a “character” in Losing Control. Authenticity is important to me, as the film has absurd elements that I wanted to ground in reality. Having lived in Boston for eight years, I wrote the script to include Boston landmarks and cultural elements, such as the Duck Tours (tours on amphibious WWII vehicles that go through the streets and in the water as passersby quack at them). One of the first scenes I wrote was on a Duck Tour. I had no idea at the time if we’d be able to pull off shooting on one, but sure enough, they were unbelievably accommodating. Years before we were financed, Bob Schwartz, assistant director of marketing & sales, promised me that we could shoot on a Duck for free. Once we had financing, I called him, and he was enthusiastic about us coming and shooting. He was so enthusiastic, in fact, that he let us take out several Ducks over the time we were there to get everything we needed.

Having become a symbiotic family after three weeks of shooting in LA, it seemed obvious that we needed to bring as much of our crew as possible to Boston for this shoot. We had been meticulously collecting airline miles on our American Express card through our production expenses, and had enough miles to bring many of our department heads and key crew to Boston with us. Thanks to the generosity of The Chandler Inn in Boston, we were able to afford to put everyone up in a great part of town near all of our locations. If we had not been able to have the continuity of our team in Boston, then the short prep time between the LA and Boston shoots might have diminished what we shot in Boston. There, we operated like a little army with our producer Matt Medlin and 1st AD and co-producer Nick Harvard getting permits and street closures while my DP Jamie Urman, gaffer George Su and 1st AC Jeff Nolde trekked around town getting the B-roll we needed before our actors arrived. Kimmie Johnson, a local Boston production coordinator, recruited a great local crew for us and we were able to get everything we needed in the short time we were there.

Part of what made this tight schedule and grueling work pleasurable was an amazing Boston wrap dinner that one of our investors, Alan Spiro, hosted for us. He put together a scrumptious dinner party in an elegant loft in the South End for our cast and crew and our other local investors. It was a chance for everyone to relax and meet many of the folks who made our film possible. We showed a three-minute “trampler” (trailer + sampler) of footage from our LA shoot that our post-production supervisor, John-Michael Powell edited and FedEx-ed to us for the event.

Our final night of shooting was magical for so many reasons: partly because it was shot below the twinkly lights of Brattle Square in Cambridge, partly because it was the finale to 23 days of making Losing Control come to life, and partly because Nick Harvard announced, “That’s a wrap!” just steps from Harvard’s Lehman Hall where I founded the Dudley Film Program and began my dream of making movies a decade before.