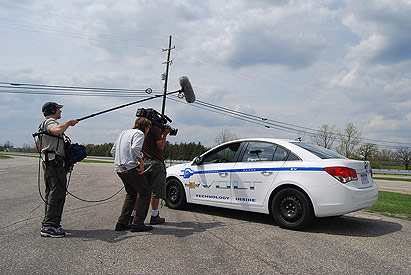 The Chevy Volt makes an appearance in "Revenge," as do vehicles converted by motivated car owners.

Director Chris Paine is back with a follow-up to his highly touted documentary, Who Killed the Electric Car?, which celebrated the birth and mourned the death of the electric car. With help from a cast of unwavering advocates, Paine resurrects the vehicle in Revenge of the Electric Car.

The electric car’s time has come, proposes the doc. And sure enough, the race seems to be on to manufacture a stylish, reliable, powerful—yet affordable—electric car. Paine first became interested in electric cars in the mid 90s, after having leased one. He hadn’t even liked cars until he experienced GM’s EV1, whose tragic demise eventually became the subject of Who Killed the Electric Car?

The Independent’s Katherine Brodsky caught up with Paine, an outspoken proponent of electric cars and an environmental activist, at the Tribeca Film Festival where Revenge of the Electric Car had its world premiere. It screens this month in NYC and Raleigh, NC and, if you ask, at city near you.

Katherine Brodsky: Your love affair with the electric car began when you experienced one first-hand. What was that like?

Chris Paine: I leased the GM EV1 and it totally made me feel like the 21st century had arrived. It didn’t have pollution, it was much faster, it was much quieter, it was very sweet… like being in Autopia in Disneyland. It was a very beautiful car.

KB: It’s interesting that you are mentioning all of these great qualities about it that are “cool,” but not necessarily focused on environmentalism…

Paine: Yeah, it [used] no gasoline, it was designed by a famous engineer that I knew about, so I was really hooked. I tried to get the mainstream media to cover story and I couldn’t do it. So I decided to work the game kind of as a joke with a funeral for the car.

KB: Tell me about the joke?

Paine: We thought, where but in Los Angeles would you have celebrities having a funeral for their car? A lot of engineers who were working with cars for years were there and dozens of people that had their cars in the last weeks before they got repossessed… Celebrities who happened to have EV1s because originally GM got a lot of celebrities to drive them. They all agreed to come out and talk about why this was a bad thing. We had a wreath on the car… it actually turned out to be quite emotional. It became an event about air pollution and Los Angeles and how come the future had stopped just when it seemed that you had it in your hands. And when the media gave us ridiculous coverage, well this is where our documentary started.

KB: And now, five years later, you’re taking Revenge so to speak. It takes so much time and effort and passion to do one documentary about a subject and here you are tackling a second one around almost the same subject. What made you do that?

Paine: The first film was about how sometimes great things get killed and you can’t kill a great idea. I really do believe that these cars need to be introduced into the marketplace and begin to challenge oil, because the biggest issue of our generation is using less fossil fuel.

KB: We’re relying on oil so much.

Paine: The electric car is a symbol of innovation. So when everyone started coming back to the table, I thought I already have the access and the contacts and who knows this might be an opportunity to have a film not just about the system being shut down but about the system working. That would be a nice bookend, especially since our film plays not just in the mainstream, but in schools and a lot of places where you are influencing people about what society is capable of.

KB: Why did you choose to focus so much on the personal side of the people involved in the electric car?

Paine: There are three things that make a convincing argument: The first is logic. You or I could have all the facts in the world and we might not be able to convince ourselves of anything. The second is passion. The third is charisma or character. We use them together to make an argument and focus on what kind of characters it takes to create change. Plus, I’m a storyteller and storytelling begins with people.

KB: That’s really interesting because it is not just about the electric car; it’s about change and what it really takes to create change.

Paine: Right and [how] to start something and to be an entrepreneur. That’s why each one of the people represents a different part of the car industry in a sense. Well, let’s see if we can get four different kinds of people that represent many other people and maybe everyone can relate to someone.

KB: Yeah. To be honest, it does feel almost like a piece of propaganda in some ways because of this obviously positive, almost promotional, spin. It seems like your intention was to show people or convince people (rather than cover critically). Is that true?

Paine: It’s true. I mean we didn’t take a dollar from the car companies to make this film, we self-financed it. We were offered many things and never took anything, because we had to keep the collaboration pure. I have been driving electric cars for 12 years; I know how many obstacles they have and people are so resistant to change. Industry is so nervous about changing what they are doing. This, in my deepest view, is a very good thing for society and if people don’t pay attention to it they will just give up. So, I will advocate and I think I’m right and that’s my job as an artist to advocate for what I believe in.

KB: Why do you think people are so resistant to change?

Paine: Cars are not quite like buying the new iPhone. People don’t like changing what they are used to. With cars, [people figure], “I know about going to the gas station and paying insurance and getting my tune-up.” If it saves energy, people [may] say, “I have too many things to worry about and I’m not going to worry about that.” It is sort of like basic human laziness. We have a lot of other things worrying us, but this is a good [behavior] to change.

KB: You didn’t look a lot into infrastructure in the doc. It seems like a lot of car companies are relying on the government to step in rather than doing it themselves.

Paine: That’s a good question. We almost did an infrastructure chapter in the film. For a 90-minute movie, we could have had a 12-hour hour mini-series about this, because it is a vast topic… we started to play with some of the infrastructure stories. Battle of the cities, like San Francisco vs. Portland—who is going to win—New York vs. Boston? What I was hoping is that the movie will build up enough momentum and people will go to the Internet and use their own momentum.

KB: An obvious question, but: What has the response been like from the car companies? What did they think of the film?

Paine: GM was the most suspicious of us, for good reason, if you’ve seen the film. Toyota wouldn’t let us in; we tried there. Karma didn’t.

KB: Did they give you reasons?

Paine: No, they just didn’t call back. Eventually, I started emailing with Bob Lutz [vice chair of GM], which is how the email in the movie begins. I go: So you announced you were doing your electric car, you know I was once one of GM’s electric car fans, I’m still that way, I just think that you made a terrible decision on that last car, but if you are doing it again then I’d be really interested in covering your story. He went “Maybe, maybe.” So then I went to GM, put on a dog and pony show and I could see that maybe I could pull them in and maybe I could get the inside story. That was sort of the thing; our deal was no footage until 2011, when it was released.

KB: Is that because they didn’t want other companies to know what they were doing? Is that it?

Paine: Oh yeah, car companies are very secretive, they don’t want anyone to know and they also wanted to have a release of their car without a movie coming out that would be critical to them, I mean they didn’t know what we were going to do. But, Bob Lutz talks in the movie about “risk-free communication” and he got his people into taking me along for the ride. I told Bob, “Listen, I’m not here to Michael Moore you, I am here to get the electric car on the road and if you’re doing that too, were both are probably going to like this movie,” so that’s the end of that. And then Elon Musk [CEO of Tesla Motors], I met him at Burning Man years ago. I ended up buying a Tesla and I put my deposit down, so I was inside that story. And then with Nissan’s [president] Carlos Ghosn, we wrote and we said that we were doing something secret and they flew some people out and interviewed us and gave us the okay. Then Reverend Gadget was my next-door neighbor and there are a lot of people doing conversion, not just Gadget.

KB: Where does he get the funds to do all that?

Paine: It’s his hobby. He’s a maker. And it’s amazing how he kept going, after all these horrible things.

KB: I guess that’s what it comes down to, how these people believe… how they are sure when everyone else isn’t.

Paine: Exactly. They wanted the film to be a yes. The first film was supposed to be a yes, but because of what happened it seemed like a big no. It was a yes on technology and it was a no on the system working. I like to think of it as a double yes, I am not an apologist for these companies. The reason car companies are making this is: there is a lot of regulatory pressure on them, oil prices are [high], they want to green wash their brand, I mean all these things are going on and fundamentally I wanted to celebrate that.

KB: At the panel following the film, Nissan’s Carlos Ghosn said that it would take about 10 years to have about 10 percent of the market, which to me seems so small. Do you think it’s going to go that slow?

Paine: [Ten percent] is about 100 million cars, that’s a lot of cars. I think 10 years is probably a reasonable thing.

KB: Do you think one day we will all be driving electric cars?

Paine: Yeah, they won’t just be electric cars, there will be a mix of different cars. But there will be more and more. It is going to be great for the US. The money [spent on fuel] is going to stay here for once instead of being exported to the Middle East.

KB: Good. What’s next for the film?

Paine: [It’s playing July 12th in NYC and July 19th in Raleigh, NC ] and should be out this fall in most requested cities.

KB: Do you have any other projects that you are currently working on yourself?

For more information on Revenge of the Electric Car, and to request a screening near you, visit: www.revengeoftheelectriccar.com