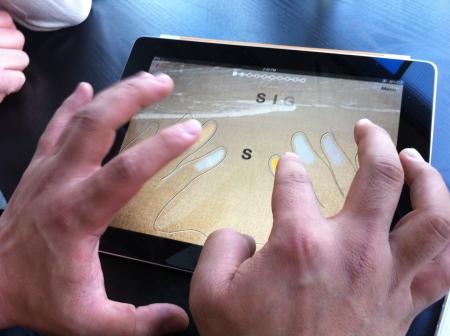 Here's how you learn finger-braille through the Planet of Snail app.

For two years South Korean director Seung-Jun Yi and his assistant director took a two-hour subway ride to the home of the deaf and blind poet Young-Chan and his wife Soon-Ho. The couple communicates through a technique of gentle finger tapping called finger-braille, developed by the Japanese deaf and blind professor Satoshi Fukushima. Seung-Jun Yi became fascinated with how the couple negotiated daily life and hoped they would allow him to film. The result, Planet of Snail follows the couple as they meet with deaf-blind friends, eat Soon-Ho’s ambitious Korean meals, and in the most triumphant scene of all, change a light bulb.

Planet of Snail received funding from the Korea Creative Content Agency (KOCCA) to develop an app for finger-braille and support the marketing/distribution efforts, which allowed the director, two producers, and two Amsterdam-based distribution/business consultants to attend the 2011 International Film Festival Amsterdam (IDFA), where the film won best feature- length documentary. The Independent’s Randi Cecchine had the pleasure of meeting with the director and support team a few days before the award was announced.

Randi Cecchine: Seung-Jun, how did you decide to make this film?

Seung-Jun Yi: I talked with Young-Chan several times through his wife [and] gradually I came to have confidence in making a documentary… as a director. I knew he likes to drink beer, so I bought two bottles of cheap beer and I brought it to his house and I made him touch the bottle and he smiled, and he came to know what that was. He liked beer very much. If some friends of him bring canned beer or beers in plastic bottles, ‘Oh, it’s not beer. Beer should be in a bottle.’ In that moment I felt—this guy has a special sense that we don’t recognize. We also discovered a shared love of poetry together.

(Producer) Min-Chul Kim: That was Seung-Jun’s “Moment of Truth,” or “Moment of Discovery.”

RC: Min-Chul, how did you and your company become involved?

Min-Chul Kim: [Seung-Jun Yi] came to me in 2009 with two pages of text explaining how difficult and isolating the lives of deaf/blind people are. To me it sounded very depressing. This is a story that I don’t even pay attention to when it’s on TV news… I don’t want to make a film I don’t want to watch. I said, ‘good luck.’

He came back two or three months after that horrible first encounter with a 10-minute clip. I watched it—I had to watch it—and I found something really special. It invited me to know more about this life. I thought, ‘Oh, this character has something and this filmmaker has some special talent to visualize without making it depressing.’

That night he invited me to a screening of his previous film, screened at Hotdocs, [called] Children of God, about the lives of children living in a crematorium in Nepal. It was a marvelous film, so poetic, I had been a little bit cynical about Korean documentary style, so this film was very special. That night we got really drunk—he is a huge beer fan—and I don’t know how but we signed the contract that night.

[Min-Chul explained that in Korea most documentaries are made for TV in a reportage style, or are activist videos made to counter the official TV stories. Until recently there has been little tradition of aesthetics or character-driven storytelling, and few opportunities for filmmakers to study with documentary practitioners. Filmmakers like Seung-Jun Yi have emerged from the TV world, as their frustrations with the limitations of TV production have drawn them to explore other kinds of storytelling. As more creative documentaries have been made in Korea and garnered box office success, a “new wave” of documentary filmmakers is emerging and Seung-Jun Yi is a key player in this movement.]

Min-Chul Kim: I also have to mention that [Seung Jun Yi] has an exceptional observational skill that makes him really one-of-a-kind. Not a fly on a wall verite style. He’s there, but he’s not just watching from afar. He goes really deep into it, he opens [the story] with such an intimate relationship and trust. You remember the scene where they were throwing a pinecone to the director? That thing wouldn’t have been possible without such intimate relationships. That’s his signature style.

[Seung-Jun has loved documentaries since he was a child, saying that he would sometimes “feel goose bumps” while watching them. He decided to major in history in college because he thought it would make him a better documentary filmmaker, yet there were no documentary classes taught in film school. After university he worked making TV documentaries, and then for a publishing company making a doc magazine. For two years he filmed two women who had been living together for over 30 years in a remote area with no electricity. What he learned then would prove to be the building blocks of his filmmaking style. A senior colleague told him, “If you observe someone’s daily life in detail, even though it seems very simple and dull, it is really interesting.”]

Seung-Jun Yi: After two years I came to understand what that means. While I was shooting, I sometimes talked with Young-Chan about his life, and also my life. I took some time to enjoy, and also I shot sometimes. This was a kind of process I never experienced as a director. In that sense I was very happy. I came to think of my life through his… through the relationship between him and his wife, [and through] his wife. She asked me after finishing this film, ‘Are you going to stop coming?’ ‘I promised, I am your husband friend,’ I said, ‘I am coming to you until one of us dies.’

We invited them to the screening and his wife said that she was worried about how it was going to turn out asked [Young-Chan], ‘Did you think the same?’ He said, ‘I didn’t worry about anything, I trust him.’ We had really strong trust.

I hope this film helps him to accomplish his dreams. He wants to become a novelist and become the first deaf and blind preacher in Korea. He wants to go to America to study social welfare. Now he is studying English a lot.

There are some doc directors who are also activists; I more approach doc as a film, cinema. If [the] main characters have some difficulties or have some problems then as a human being I want my film to help them a lot. But not in a direct way. So, maybe if this film is successful, and he publishes novels or poetry, then he can become very famous and then media people will be interested in deaf and blind people, and then politicians will pay more attention.

RC: You say you aren’t an activist, but in some ways you are.

Seung-Jun Yi: I think every doc director is an activist, their army is visual images. It is most important to reach the audience’s mind and heart. If the audience feels something deeply at the scene [while] watching, then, then someday it helps. For example, the audience could have some chance to meet deaf and blind on the street then already the audience [has] understood and felt what they go through. Without understanding and without feeling, no one can help others. To help others does not come from the head, it comes from the heart.

The filmmakers are planning to offer barrier-free screenings to allow deaf and blind people the opportunity to experience the film. For more information visit www.planetofsnail.com. Download the planet of snail finger-braille app at app.planetofsnail.com.