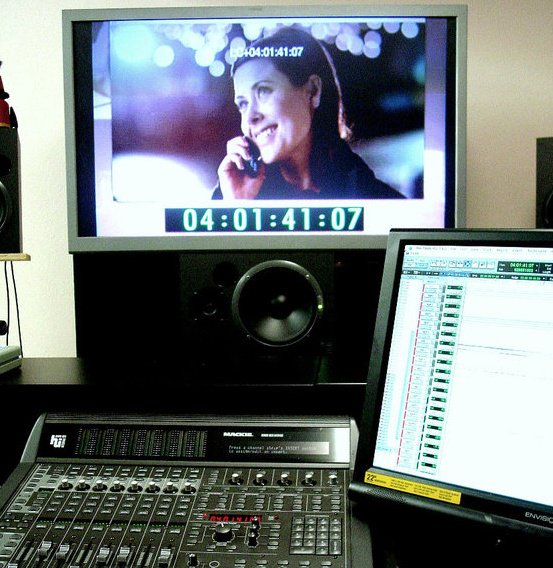 In the edit room with "Losing Control" (photo by Peter Lago).

In my last film journal, I talked about the production of my feature independent film, Losing Control, a quirky, romantic comedy about a female scientist who wants proof that her boyfriend is “the one.” I discussed the trials of production—locations falling through, lack of sleep, and stretching an already thin budget with an overly ambitious schedule. By the time we wrapped, it felt like a miracle that we had gotten the movie we had set out to make into the proverbial can.

We were supposedly over the biggest hump with the most uncertainty, but in searching for an editor for our film, I realized there were still many decisions to be made. Different editors can make completely different movies with exactly the same footage. If you paid attention to the logline of our film, you know that assurance is something this scientist-turned-filmmaker craves. More uncertainty is not.

As my producer, Matthew Medlin, and I interviewed people for the job, we realized that we needed someone who could handle the comedy of our film without making it feel too broad, and who could get into the heads of our characters to bring out some of the deeper themes. We found an editor who could do both. Through one of our co-producers, we met Robin Katz. Robin had edited Quinceañera, which won both the Grand Jury Prize and the Audience Award at the Sundance Film Festival in 2006. While Quinceañera was an indie drama with some light moments, Robin had also edited comedies like White Men Can’t Jump and television shows like Lipstick Jungle. It was clear she could handle comedic and dramatic fare equally well.

From our first phone conversation, it was clear that Robin had an intuitive understanding of our characters beyond their quirky foibles. She spoke of them with great empathy and drew conclusions that I was happy to hear that she could discern from the script before even seeing our dailies. We showed Robin a teaser promo that we had cut, and from that she really understood our tone and what we were going for with our movie. By the time we completed our editor search, it was about a month after principal photography, which was fortuitous because I’d started to regain my objectivity. In addition, Robin wanted four or five weeks to work by herself on the first cut. We met a few times during this period to make sure we were on the same page, but Robin was very much on her own and I was getting even more valuable objectivity.

After the first cut, Robin and I began working together several days at a time. It felt a lot like working with my actors. Robin is a wonderful listener. She would process my direction and the scene would take on a completely different quality. It was such an organic process. After a few more weeks of working like this we had a cut that we were ready to show for feedback. We had about 15 friends, mostly industry folks at the screening—directors, editors, and writers—and it was mainly to see if the movie was making sense. It was, but now it was time to pay more attention to character and tone. We worked for a couple more weeks until we felt we’d gotten those aspects down and had another screening. This screening was probably the biggest turning point in the editing process.

During production, we had never had time to shoot an opening credits sequence, which was also meant to introduce our main character and her life as a scientist. We had planned to shoot it later, but hadn’t done it in time for this screening. This screening had the strongest (and least positive) reaction of all our test screenings. At first the reaction was discouraging, until we realized that it was a golden opportunity to rethink our plan for the opening credits. Instead of shooting our main character in the lab environment with clever reveals of credits on lab equipment, we needed to do something much more story and character-driven—something we’d never be able to do by shooting live action.

We turned to our colorist and visual effects artist, Aaron Peak of Hollywood DI, where this critical screening took place, and began brainstorming about animation ideas that he could do for us. There was a visual theme in the script that I always loved—the idea that our main character makes a flowchart for her life in her lab notebook on a graph paper background, just like she does for an experiment. We realized that this motif was the perfect vehicle to introduce you to our main character, her science and her psychology, all at the same time. Our friend, Jared Hamaguchi, who is an art director for an advertising agency, had some great creative input as well and after a few months of revisions we had a clever and fun animation that completely solved our audience’s issues. Our next test screening was a big success and everyone agreed the film was extremely close. And we hadn’t even done our music, visual effects, sound design, or color correction yet. We were feeling great.

While Aaron had created the perfect animation, we realized that we did not have any music to go with it. This is when we met with another post-production stumbling block—the composer that we had hired three months before had still not produced any usable cues. We were extremely frustrated and beginning to get nervous as festival deadlines approached. Then the most amazing thing happened. My friend, actress Abigail Spencer, hosted a party. In the gift bag was a CD for a woman named Eleisha Eagle who had just moved to Los Angeles. On the way home, I listened to Eleisha’s CD. Her music was the perfect fit for our film. My music supervisor, Sharon Edelson, and I met with Eleisha and showed her the animation and a couple other parts of the film. The next morning, Eleisha emailed us lyrics and played a song she’d written for us over the phone. We were amazed. She’d done in one day what someone else hadn’t been able to do in months. We fired our composer, but now needed to find someone to score the rest of our film (but incidentally, we use two other songs by Eleisha Eagle in the film).

We had no leads and very little time. Luckily, our neighbors down the hall run a post-production consulting company, Executive Post Consulting, and suggested we call an agent who reps many talented composers. The agent told me that he had just the guy for us, and he was right. John Swihart, who had scored about 40 feature films including Napoleon Dynamite and Youth in Revolt was the perfect guy to put the finishing touches on the film. John had the same intuitive feel for Losing Control as that of our editor, Robin Katz. After he watched the film in my office, we talked for an hour about the main character, Boston (where he’d lived for 18 years and where the film is set), the tone, and what we each liked and didn’t like about the temp music. Even now, I remember it not being the words that he was speaking but a palpable understanding of the film as a whole and the role his music would play in it. We got to work immediately in his brand new Laurel Canyon studio and after one false start, all the music started to fall into place. When we didn’t know what a scene needed, we left it and moved on. We never let ourselves get stuck. Like Robin, John was also a great and sensitive listener, and in six weeks, we had a score complete with live instruments. It was probably one of the most rewarding and fun experiences I’d had on the entire film.

After John delivered his score, we were ready to do our sound mix. Several people had recommended Monkeyland Audio to us as being indie-friendly. We couldn’t believe it when we toured their studio. It was huge and so professional. I had mixed my last two short films at Fox Studios, and Monkeyland had all the bells and whistles that Fox did—including a pool table and a green room for actors. It was luxurious. Peter Lago brought the film to life with his great effects work, and the owner, Trip Brock, made us feel like a big-budget client. He did our sound mix himself.

The last step was for Aaron to do our color-correction and visual effects. Our DP and I showed Aaron the photos that we had used for visual reference during pre-production and asked Aaron to watch a couple of reference films to see the color and saturation we wanted. By this point in the process, I had worked so closely with Aaron on our animation and effects that he had a clear idea of the role the color would play in establishing the tone of our movie. We were elated as the unknowns of making our film were eliminated one-by-one. Eventually, the movie became whole right before our eyes.

One Response to “Film Journal: Navigating the Uncertainty of Post-Production”